On Monday, March 11, 2019, at SXSW, I interviewed director Bob Byington to discuss his newest feature, Frances Ferguson (which I also reviewed). Joining us for the conversation were lead actress Kaley Wheless and supporting player David Krumholtz. The movie follows the misadventures of the titular character, living in North Platte, Nebraska, as she goes from unhappy wife, mother and substitute teacher to seducer of a student to convicted sex offender and beyond, the entire affair narrated, in ironic counterpoint, by actor Nick Offerman. Wheless delivers an engagingly dispassionate performance that elevates Frances’ sordid tale to the level of eccentric comedy. Krumholtz, as her post-prison group-therapy leader, is perfect in the role of a man amusingly out of his depth. Here is a condensed digest of our conversation, edited for length and clarity.

Hammer to Nail: So, Bob, why set the story in North Platte, Nebraska?

Bob Byington: Well, I grew up in Lincoln, Nebraska, and North Platte is a small town in western Nebraska, and we sort of had our eye on it and knew some people there. We were able to gain access to the prison and courthouse and things like that, in a way that we wouldn’t be able to here in Austin.

HtN: Your entire film is editorialized by narrator Nick Offerman, but you open with this Fargo-esque “based on real events.” You mentioned at the post-screening Q&A last night that this was based, at least generally, on things you’d seen and heard about. Was there anything specific that motivated you to make this?

BB: I’d been working with Kaley on something and I saw one of these New York Post articles about a teacher, and I saw her mug shot, and she didn’t look like Kaley, but Kaley could have been made to look like her in a way that planted a seed of an idea for me.

HtN: You just said you had been working with Kaley before making this film. How did that relationship begin?

BB: Well, I was her teacher at Colorado College and she and I hit it off and kept in touch. I guess “hit it off” is too strong an impression…

BB: We kind of have a thing where I don’t know if I tricked her into being in the movie or she tricked me, and it’s very confusing, but one thing led to another and we got up there and made the film.

HtN: So how did Bob pitch the film to you, Kaley?

KW: My memory is that he was working on a short and we were just workshopping a specific character within the context of that, and then after seeing the New York Post article…and there were quite a few others, as well, which I feel like we started seeing every week, and the mug shots did look all look quite similar, and it seemed like an interesting phenomenon. So, to my memory we then moved that character over to that environment with the crime, and that’s how it happened.

HtN: Yeah, we had a case in Maryland recently that was also quite similar.

HtN: David, how did you come on board?

David Krumholtz: He called me and asked me if I would be willing to drive to Nebraska … (laughs) … and I said yes, and I did. But Bob and I had worked together before, years ago, on Tuna, and then he was clearly so dissatisfied with my performance in that film that he didn’t call me or speak to me for about 15 or 16 years. And then his last film, Infinity Baby, which is really quite brilliant, was at the Montclair Film Festival, and I happen to live in New Jersey, and Kevin Corrigan is in that film and he invited me down. I showed up fully expecting Bob to ignore me, and he didn’t. We had a nice dinner afterwards and he enjoyed my wife very much. 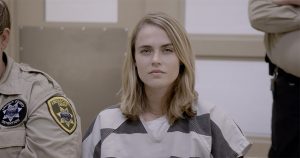 DK: And taking pity on my wife for being with me, he cast me … instead of her, even though she’s an actress and totally could have played my role. But yeah, we rekindled something, and now it’ll probably be another 15 or 20 years before we do another thing. That could be a weird, sort of subversive pattern within his films. That could be fun.

HtN: Bob, how did you begin to develop that ironic narration by Nick Offerman? It shifts, as well, throughout the film, and then Kaley has a little bit that jumps in there. Did you always plan to do that? And how did you bring Nick Offerman on board?

BB: Scott King, the writer, and I started writing the script and immediately wrote for Nick. We both knew Nick and so the voiceover is written for him. We sort of panicked at some point and thought we should maybe hire Nick’s wife Megan [Mullally] to do the narration, but Nick had already done a lot of it. We were so tired of hearing men narrate films that we thought, “Well, maybe we’re making a mistake and need Megan Mullally to do it.” But we stuck with Nick.

HtN: (laughs) This is all rationalization, then, for the fact that she said no. But you do bring a female voice in, occasionally, with Kaley chiming in there, as well. Why did you decide to have it not just be Nick, and to have Kaley jump in there every once in a while?

BB: Well, I just started writing some of the stuff, and “prison is one of the last places you expect to wind up” was kind of in Kaley’s voice, for me, so we gave that to her.

DK: May I say, I came away with the impression, that I applied to it, that Nick was the voice of her dead dad.

DK: No question? OK. I didn’t want to say something that wasn’t real.

HtN: And what about your lower-thirds titles, which I really enjoyed, sort of kicking off, right away, that tone of the film, with a word like “mother” followed by the person’s name in parentheses. What made you want to do that? It was a nice touch.

BB: Thank you! There’s something kind of clinical about describing her relationship to the world, and hinting that the movie is about Fran and the other characters are defined in their relationship to her. That just seemed like it was structurally elegant and something we wanted to do.

HtN: And also, as people disappear from her life, you have the narrator announcing, “This is the last time we see this person.” Going back to the casting, how did you choose Keith Poulson and Martin Starr?

HtN: And what about the kid, playing the student, or “the kid?”

HtN: So, he was from North Platte?

BB: Yeah. As were others in the film.

HtN: I was also really interested in the sort of loose cinematography, with the camera rarely, if ever, on sticks, particularly in the final date scene, with that back and forth, where it seems like another character in the scene. Bob, how did you come up with that style, and how was it for the actors working with that roving camera? 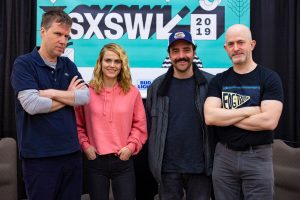 BB: Well, I’ll say that we lifted that from Toni Erdmann, and you (nodding to Kaley and David) can talk about what that was like for you.

KW: I liked it. It was not very obtrusive and didn’t disturb the scene. It felt very natural.

DK: (laughs) I thought it was weird as s***. Honestly. When we were filming, I thought, “We’re crossing every line,” you know, literally, the line, and I thought, “This won’t edit together well, or maybe it will.” And then, I realized we were just putting things on camera.

DK: No, I knew you did, but I assumed you’d have an uphill battle to some extent. There was probably footage that you would have liked to use, at certain points, that you kind of couldn’t…

BB: Of course! Yeah. Honestly, David is so good in the movie that there’s a surplus of material from him that you can put in the film. And we started shooting a scene – the first group therapy – and he was so good in the scene that I wanted to shoot and shoot and shoot. And I had to stop myself, say “Stop!,” and be done with that scene, because I knew it was going to be an editorial nightmare.

DK: That was a tough one around the table.

DK: (laughs) It’s easy to be good in a movie when people are mostly not actors, but it’s very kind of you to say.

HtN: It was a very engaging scene. I think many of the scenes in the film were engaging.

BB: OK. That’s your opinion. My opinion is that this one was the best one. (sotto voce) I think Kaley is great, too. (laughs)

HtN: (laughs) So, speaking of your performance, Kaley, you’re so disaffected throughout the film. How did you approach this character in order to deliver that performance?

KW: (laughs) It’s very genuine apathy…No! Just kidding. I think I just went back to when we were workshopping the character in the beginning and had a pretty solid tone for her. That was in it from the beginning.

BB: In the short we had planned, she had been abducted, although I wasn’t clear on who she was in the short, but later, I was like, “She’s trapped, literally, in a house or something, or like Brie Larson in Room.” And so she’s shut down, right? And so we took that shut-downness and put it into this teacher. I think it worked.

HtN: Definitely! And it’s consistent throughout.

DK: You know, you’re so used to seeing likeable leads, or that being a sort of unwritten mandate, that I think it takes you a good few scenes to realize that she’s a crazy person, and that you’re watching a film about a genuinely crazy person. And then it’s kind of a breath of fresh air from then on in, because you realize you’ve never seen anything like it. She’s a crazy person who feels justified in every stance she takes, every interaction she has, and that justification becomes the most insane part of it all.

HtN: It’s appropriate, then, that she ends up in a quasi-12-step program, because addiction is all about isolation, and this is just another form of that. (all murmur assent) So, I also really enjoy the way you just fade out your film, unexpectedly in the middle of this date. The credits start to come up.

KW: (laughs) Because it’s the end of the movie?

DK: Not because it’s ending, but because you are so anti-structure that it’s just quintessential Bob.

HtN: Well, we’re expecting something to come from this date, but instead it’s just credits and then, “This is the last time we’ll see Fran.” So, I enjoyed that. It fit.

BB: Thank you! You’re more intelligent than the people who made the film. You’re ascribing things …

HtN: (to Kaley) So now it’s you who will have another 15 to 20 years before you work with Bob again.

HtN: Well, congratulations on the film, and thanks for chatting with me! 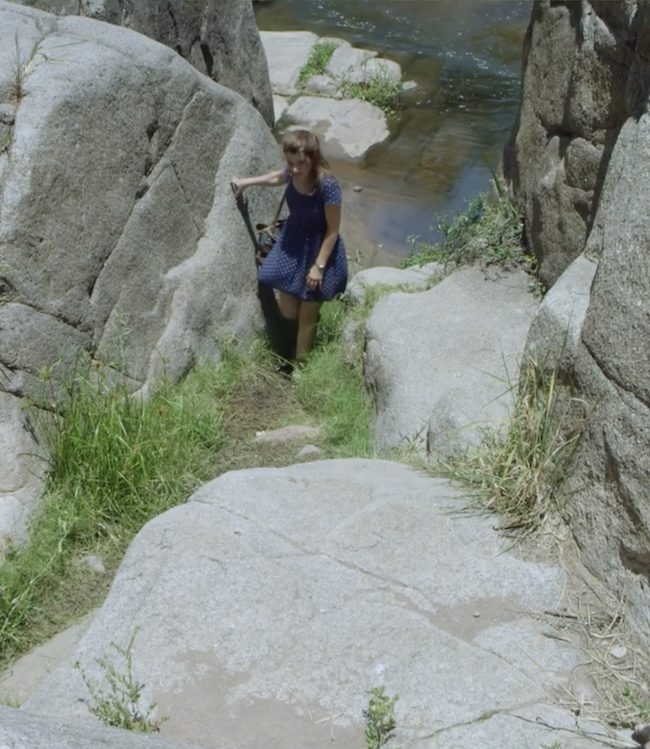