(Last week, a trio of HtN contributors provided a list of films they were excited to see at DOC NYC, 2021. HtN contributor and self-proclaimed “doc geek” Lauren Wissot has a great list as well, check it out! Like what you see here on Hammer to Nail? Why not give just $1.00 per month via Patreon to help keep us going?)

For a doc geek like me there’s no such thing as a DOC NYC shortlist. Indeed, my original screener request document contained close to 40 feature films – which to be fair is only a third of this year’s feature-length lineup (so I guess I can’t be accused of being all that greedy). That said, since there’s only 24 hours in a day I find it practical to prioritize according to my own idiosyncratic categories. Which basically breaks down into three (often overlapping) sections: Nonfiction Auteurs, Intriguing Character Studies, and Weird Shit. The following is just a baker’s dozen of my highly personal, admittedly incomplete, DOC NYC must-sees. (DOC NYC, “America’s largest documentary festival,” runs in person November 10-18 and online nationwide November 19-28.)

Nonfiction Auteurs (and some Weird Shit)

Penny Lane (Our Nixon, Hall Satan?, Nuts!) and polarizing saxophonist Kenny G together at last. What’s not to look forward to?

THE MOLE (US Premiere)

Danish provocateur Mads Brügger (The Red Chapel) and North Korea together again – this time with “a spy who uncovers the worst of North Korea’s secrets.” (What’s not to look forward to?)

While this alternately could have made my Intriguing Character Studies category, since it’s Peabody/Emmy/Academy Award-nominee Sam Pollard at the helm, and tennis and Civil Rights legend Arthur Ashe in his spotlight, “auteur” seems more than applicable. 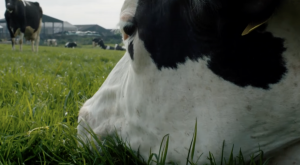 If anyone can make rural farm life in England revelatory it’s Andrea Arnold. Another Cannes Film Festival hit from the British auteur – this time starring a bovine named Luna.

“Newly restored,” plus Pennebaker and Hegedus, plus docu-series about a DC legislative battle, equals a perennial no-brainer.

Robert B. Weide (principal director and EP of Curb Your Enthusiasm for half a decade) teams up with Don Argott (who I’ve been following since being rocked by 2011’s Last Days Here, which follows the heroin-addicted lead singer of doom metal band Pentagram) to tackle the ridiculously prolific Kurt Vonnegut. Decades in the making, and I’m guessing, timeless.

I vividly recall the arthouse star Adrienne Shelly’s bizarre murder in her West Village apartment back in 2006 sending shockwaves throughout NYC – a tragedy that haunts to this very day. Tagging along as the beloved actress-filmmaker-screenwriter’s husband digs for some solid answers sounds exactly like the closure that indie film also needs.

Legendary director Roberto Rossellini as seen through the eyes of his filmmaker grandson Alessandro Rossellini seems like the perfect recipe for one neorealistic family drama.

“The untold story of Robert Stigwood, the impresario behind Saturday Night Fever.” The UK-residing Australian managed both Cream and the Bee Gees, dabbled in theater with Hair and Jesus Christ Superstar, and ultimately maneuvered his way into movies with Grease and Saturday Night Fever. That’s some big disco balls.

I’m a sucker for anything David Simon-adjacent. So if actress/activist/filmmaker Sonja Sohn (of The Wire and Baltimore Rising) wants to look into the real life, questionable death (murder? suicide? a BPD-ordered hit?) of Baltimore detective Sean Suiter, I’m all eyes.

HOLD YOUR FIRE (US Premiere)

And since one can never get enough cops and robbers – and Fab Five Freddy, who’s a producer on this one (alongside consulting producer Sam Pollard) – there’s the revisitation of a 1973 robbery (in pre-hipster Williamsburg) at a sporting goods store that resulted in the “longest hostage siege in NYPD history.” Paired with Stanley Nelson and Traci A. Curry’s Attica – a revisitation of the prison uprising that resulted in “the deadliest violence Americans had inflicted on each other in a single day since the Civil War,” and is likewise playing the fest – this might just be DOC NYC’s perfect, fuck-up-by-the-powers-that-be double feature.

Likely worth the screen time even if it were simply the story of bringing Ridley Scott’s Alien to the West End. But since the folks doing the adaptation are a bunch of British bus drivers from Dorset, England I, for one, am all in.