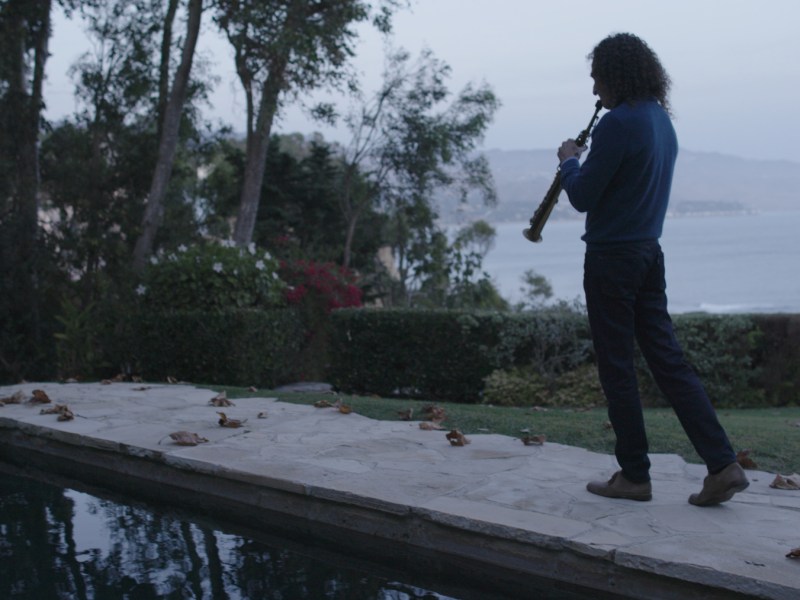 I used to think nobody could possibly listen to Kenny G by choice but then I met my wife’s grandmother who described him as absolutely her favorite and he had never done anything that wasn’t great. I’m not gonna argue taste with my elders. I don’t even know if I disagree, because his music is not something I ever needed to have an opinion on. Strangely, it did not come up when I was a metal head teen, or later when I went all rrriot grrrl. And I think Kenny G is fully aware that he’s become a bit of a shorthand for divisive music that most people don’t want to claim. Through most of Penny Lane‘s (Hail Satan?) new documentary Listening to Kenny G, the saxophone superstar seems to be in on the joke. I think it is easier to laugh at yourself when you can do it from your giant mansion. In fact, my favorite part of the film was near the end where Kenny was discussing his social media strategy and using memes to remain relevant, all of which really funny. Yeah, I thought, I kinda do like this guy.

So what does Kenny G know that we don’t, and by we I mean of course the masses of holier than thou music fans who would scoff at the thought that’s somehow this pasty white curly-fro Seattle high school jazz band kid is relevant to a discussion about music? While I’m not sure the film ever accurately decides that question, it goes a long way to giving a very balanced analysis of who this 40+ million album seller is, where he came from, and how the music machine aligned to make him a star.

It’s also very open about the fact that there is as much a derision for his music amongst jazz fans as there are people who discovered jazz through his music. I loved the examination of how a Kenny G song differs from most jazz with its emphasis on the solo instrumentalist and not on give and take within a band construction. As I struggled to compare Kenny G to anyone else I came across some strange but it maybe obvious counterparts. There is Joe Satriani, the heavy metal guitar wiz, who never quite fit in a band. There is Rick Wakeman, the greatest of all the 70s prog rock excesses and his endless stream of concept albums based around his keyboard. And I suppose I’ve never heard a Les Claypool solo album that was worth the one cent CD it was laser printed on. And I love the bass. At least Claypool is writing traditional pop music with lyrics and mostly standard song structures. Satriani (And there are a few others, like Steve Vai or Buckethead) is operating within a heavy metal context but placing the emphasis on the solo to the extent the individual songs don’t really matter, even on those few songs where he had a vocalist or God forbid sang himself [I’m looking at you Big Bad Moon]. And Wakeman is basically being a one-man orchestra, but that’s easier on piano.

Kenny G is a style of music all its one, one based on melody played tone-fully perfect if not overly-inspired over a backing track that exists only to support the soloist. In fact the thing that it is most like his vocal music, like a Michael Bolton where the emphasis is on the singular tone of the singer but the music is, for this listener, kind of bland. However I took it upon myself to do what the documentary asked me to do and actually spent the time listening to Kenny G. I listened to both his music and what he said about his art; this is a person who really does care about what he is doing and really believes he is making great music. And I was surprised at how many of these songs I knew, in the same way I believe all children are born knowing a majority of The Beatles catalog. I don’t know when I heard “Songbird” for the first time. I don’t particularly care, as it didn’t change my life, but it’s just sort of always been there, like many of Kenny G’s other songs. And if that’s not insidious enough, he’s also made millions of dollars in being one of the original investors in Starbucks and plays golf better than many professionals.

But unlike the Alanis Morissette documentary Jagged, which seemed to handle her with kid gloves, Penny Lane puts critics in this film that call Kenny G’s music masturbation. They are just outright mean, and the filmmaker proves over and over that there are few artists that generate is much scorn as Kenny G. I don’t know how Kenny G feels about this film, but it humanizes him and humanizes his music in a way that I now have a completely different feeling about him even if I don’t like the music any better. I not only respect him, I want to respect him. I’m probably going to defend him. So I hope he’s happy and even if I don’t hope more people start listening to Kenny G I do hope more people will watch Listening to Kenny G.

POSTSCRIPT: Since I brought up the Alanis Morrissette documentary, I have to take this opportunity to point out that after I wrote my piece I read that Alanis was unhappy with the film. She thought that it was a bait and switch and that they had gone into things that they had promised they wouldn’t and abused her trust. This is funny because I really felt like the movie didn’t take advantage of having her there for interviews and was very surface. Sorry, you signed the release, anything you say in an interview can be used (even against you), and any documentary that gives its subject editorial control is not a real documentary. It’s an infomercial. It’s less a documentary than Kenny G is jazz music.