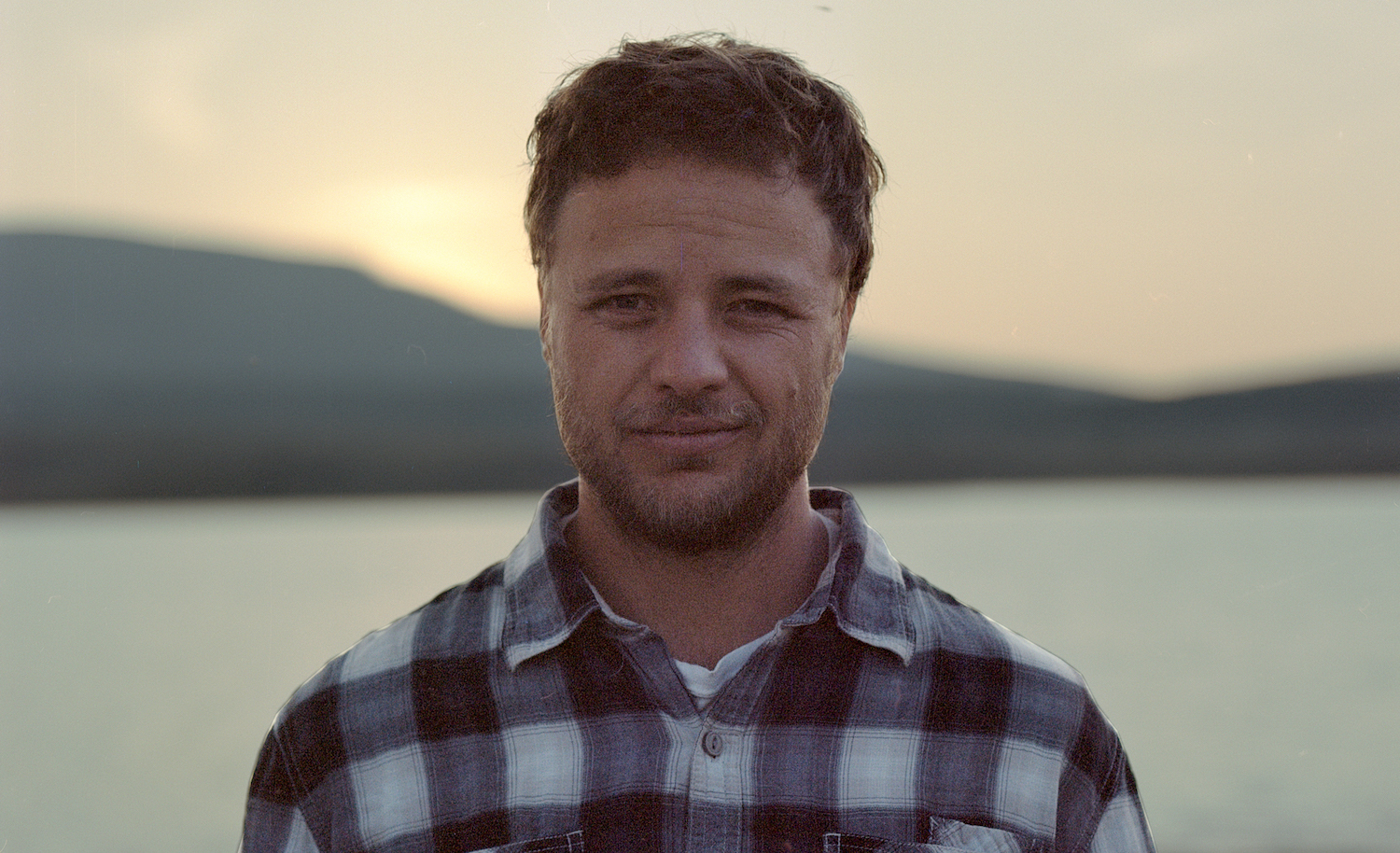 Max Walker-Silverman’s A Love Song (which Melanie Addington reviewed out of Sundance), follows the widowed Faye, a woman in late middle age, as she awaits the arrival of a high-school flame, Lito, whom she has not seen in years. She spends her days in Colorado’s Miramonte Reservoir campground, catching crawdads and imagining what their reunion will be like. Eventually, Lito shows up, and they catch up and reminisce. Things evolve in unexpected ways. In the leads, Walker-Silverman has cast veteran supporting actors Dale Dickey (Bloodline) and Wes Studi (Badland), who make the most of their time solo and together. It’s a lovely character study, a meditation on loneliness, love, and loss, the beautiful topography in lyrical harmony with the landscape of the faces before us. Just ahead of the film’s July 29 release, I had the chance to interview Walker-Silverman via Zoom. What follows is a transcript of that conversation, edited for length and clarity.

Hammer to Nail: You’re a young guy. What was the impetus behind telling the story of two late-middle-aged protagonists?

Max Walker-Silverman: I was raised by a lot of tough and gentle people and in many ways that remains my community. And at the same moment that I, myself, was falling deeply in love, all those ways life has of shaking us were taking people away from some of those I love through death or divorce or any of the many ways people leave us. So that spawned these questions about love and the desire to believe that it can be a rich and beautiful part of our lives, even if it isn’t shared with another person. So I guess I just pondered that and drove around and listened to a lot of lachrymal country ballads and this sort of came springing out of it all.

HtN: This is your first feature. How long did you work on the script?

MW-S: The idea was something I’d had in my head for quite a long time but I didn’t really put pen to paper until the spring of 2020, and did so just to sort of put something on the horizon for me and the friends I work with at a time when none of us knew if we’d ever work again. The world was upside down, so I wanted something to focus on and something to plan towards. I wrote it very quickly in a couple of weeks and then the strange experience of it was that if you act as though something’s going to happen, even though secretly I didn’t think it ever would, sometimes the pieces do come together.

HtN: So I understand you’re from the part of the country where you filmed. Did you have to do a lot of location scouting or did you know exactly where you wanted to shoot?

MW-S: (laughs) Yeah, I’ve never done a location scout in my life. I mean, I’ve never really shot anything more than an hour from where I was born. So I wrote it for every nook and crevice we shot in. That’s a lake I’ve gone to my whole life and eaten probably 2000 crawdads out of over the years. So I didn’t have to go far in mind or memory to think about where I wanted to make it. It’s the Miramonte Reservoir outside of the town of Norwood, Colorado.

MW-S: Yeah. It’s a lovely place, kind of vast and gorgeous and desolate. I really love it.

MW-S: I like both places and people that look like they’ve been in the wind and in the sun. I think those are very beautiful things.

HtN: As I mentioned, this is your first feature. How did you get the script in front of these two amazing veteran actors, Dale Dickey and Wes Studi? 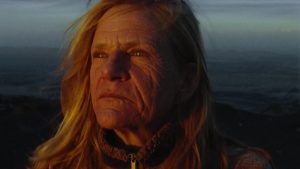 Dale Dickey in A LOVE SONG

MW-S: I had the core of the crew from film school and from the shorts I did: the cinematographer and the designers and my friend Jesse Hope, also from Colorado, who helped produce with me. But we were joined on this by a great and experienced producer named Dan Janvey who was kind of a guardian angel in a sense and helped us with the things that were new, such as the architecture of a feature and financing, and dealing with agents and things. He helped bring in a casting director.

There are always certain hoops you jump through, but ultimately, I wrote Dale a letter. She was the first person we went out to and I was so nervous to talk to her, but what a sweet, sweet, gentle soul she turned out to be. I just got lucky, I think. No one was working then but we were able to explain our plans for creating a bubble and how small and safe we could really do this thing. I think that meant a lot to these actors and was appealing and people were excited to get back to work.

HtN: It seems like the key to getting that process started was this producer, Dan Janvey. How did you meet him?

MW-S: I met him in New York when I was living there and going to film school. We had some eggs and potatoes at a place that’s now closed and just stayed in touch. God bless him. I still don’t know entirely why a producer of such pedigree took an interest in such a rinky-dink little film, but he’s a true believer in what cinema is, or what it could be. We’d have run into the wall many times without him.

HtN: So once you had these very experienced actors, Dale Dickey and Wes Studi, in your film, did the script change at all once you started working with them?

MW-S: Yeah, there were slight changes as we discussed things together. But I would say the biggest ways in which it grew were in the wordless ones. What I mean by that is that they filled so much of the space and the silence in the script with so much more life than I could have ever planned or written. I just knew from watching them that they had the ability to do so, but I would not have guessed how they would do so or what it would wind up looking like. It was just about trusting these great professionals to do what they do so well and to give the characters their past and their present, even through all the silence.

HtN: I’m glad you mentioned that because one of the things I really like about your film, and that I like in general in films that allow actors to do this, is what I call the “behavioral acting,” the stuff that exists outside of dialogue. That is so key, I think, to the success here, just watching Dale Dickey do stuff in that trailer or when she’s fishing out crawdads. Do you say “fishing” crawdads or “catching” crawdads, by the way?

MW-S: (laughs) I’ve done it my whole life and I’ve never known the answer to that question.

HtN: (laughs) Okay! Anyway, I think that’s such an important part of your film. So you mentioned that these other creative crew members were people that you went to film school with. So we’ve got your DP [Director of Photography], Alfonso Herrera Salcedo; your production designer, Juliana Barreto; and then Ramzi Bashour, your composer. How did you work with them on this film to create the look and feel of the film?

MW-S: Well, it starts with building off of what we’d done before in short films and a lot of it comes out of the landscape and the place, at an emotional level but more tangibly just defining the color palette. In many ways we were here shooting a monochromatic place that’s so yellow and hay-colored. We built the rest of the look of it based on that. Juliana created this trailer that’s made of ochres and oranges and yellows, and that’s entirely built to converse with the landscape. Or Stine Dahlman, the costume designer, dresses our main character in similarly warm tones, setting her in that place.

That’s the theory, and then at a practical level, it’s kind of this simple rule: if we can’t find something out there in that world, it probably doesn’t belong there. So everything we use comes from friends and neighbors, or my mom and dad. That was my pickup truck and my trailer we were shooting inside of. It’s really simple, but actually makes a big difference. It’s important because when there are so few objects, the appropriateness of the object becomes very important. At this point, we barely even have to talk about it together. We just sort of understand this world and how to create it. I am so extremely fortunate to get to work with people like that. 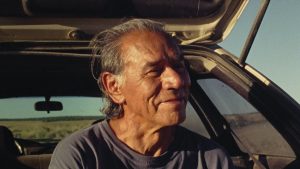 Wes Studi in A LOVE SONG

HtN: What would you describe as the biggest challenge in transitioning from making shorts to making a feature? It seems like this was a fairly manageable set. Now, of course, you’re going to be asked to direct a Marvel film. That’s your next career milestone. (laughs) That’s usually what happens. A successful indie director gets brought onto the next Marvel film. In any case, this is fairly manageable for a feature in terms of its scope, but it was a big transition, nonetheless. What would you say was the hardest part of that?

MW-S: It’s a great question. Like you say, at a production level, it was very familiar. It was really the same size as the shorts we’d done and with the same people. So it felt very comfortable, but then there is this whole new side of things, too, that comes with financing and distributing. That was new and unfamiliar and inevitably intimidating. I suppose the challenge of it was trying to navigate that new world and take it seriously while trying to honor these investors, who really took a chance on us, by trying to get them a return. That felt important, while at the same time not letting go of these things that we’d built through short films that I knew were special and meaningful, and holding on to these people and these methods that had worked well before. The challenge was just believing that these worlds—that older world and this newer world—could be unified into something. I’m happy to say that the answer was basically, “Yes, they can be.”

HtN: Well, Max, I want to thank you for chatting with me about your film. I really enjoyed it and wish you all great things with it.

MW-S: Thank you so much!