A Conversation With Frank V. Ross (TIGER TAIL IN BLUE)

Since 2005’s Quietly on By, his first official release, Frank V. Ross has shown himself to be a filmmaker who understands people. His characters consist of everyday suburbanites (up until now played mostly by his close friends), and in each film Ross displays an uncommon perceptiveness toward his subjects. In his new film, Tiger Tail in Blue, Ross plays Christopher, an aspiring writer by day and waiter by night who is married to Melody (played by Rebecca Spence), a school teacher. Their conflicting schedules only make things more difficult, and Ross gives us a view of early married life that displays a sense of romance without failing to acknowledge the realities of day-to-day life. Again he shows us that the mundane isn’t quite so. (Read Mike S. Ryan’s full HTN review.)

Tiger Tail is nominated for a 2012 “Best Film Not Playing at a Theater Near You” Gotham Award. I got a chance to talk to him the night before he left for New York to present his film at the MoMA, where it screened alongside the other nominees.

Hammer To Nail: So I guess the first question I have is that I’ve kind of noticed there’s a progression your films have gone through, for example in Quietly on By your character is living at home still, then in Hohokam the characters are in a relationship, and Present Company deals with marriage, was that intentional? I mean, are you drawing from your own life?

Frank V. Ross: I think that’s what happened, yeah. I mean, during Quietly on By I was still living at home, and very very frustrated, and for Hohokam, I was in a long-term relationship, and just wanted to make a film, I think, about people that could fight like it’s the end of the world, and then for Present Company, that was sort of my nightmare at the time, like, “What happens if I knock this girl up? I’ll have to give everything up and go live in her parents’ basement.” And it was kind of inspired by a friend of mine that did knock a girl up. She ended up miscarrying, but he gave away a hockey contract, and I just wanted to make a movie about doing the right thing, even though you shouldn’t.

FR: That’s what that movie is for me, you know, doing the right thing, even though it makes you an asshole. And then for Audrey [The Trainwreck], because I had been with the same girl for so long, I became obsessed with people who didn’t have someone. And I think the new one is actually the closest to the circumstances that me and my wife are in right now. I guess “write what you know.” It always comes back, right?

H2N: Yeah. I thought Tiger Tail did a really good job of presenting early married life. It was truthful to the point that it made me cringe, and I mean that in a good way. The early scene where your character and the wife are arguing about the rent money, for example. 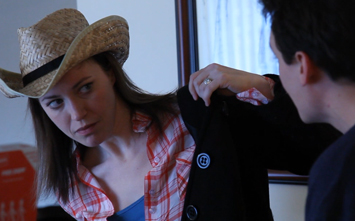 FR: Yeah I mean that’s the idea. You know, everyone is trying to make something that people will like, but I feel like you should just say what you have to say because somebody’s gonna relate to it.

H2N: I don’t know what the reactions have been like at your screenings, but I can imagine it being a little off-putting for some, you know, “That’s a little too much real life for a movie.” Has that been the case?

FR: Well, someone once told me that Quietly on By is the scariest non-horror movie ever made, and I thought that was about the highest praise I could ever get.

H2N: It’s funny you mention that. The second time I watched that one, there was something I noticed in there that I completely missed the first time—or if I did notice it was kind of subliminal—which was the white SUV. It almost had a slight horror element to it, although I guess I just took it to mean his character was just paranoid, reading into things that really meant nothing.

FR: Right, just kind of living in his own fantasy world, yeah, that was fun. Two of them were found by chance. One time we were walking down the road and I just happened to notice one passing and I panned to it.

FR: No. They were f**kin’ everywhere. [FR laughs] Like fish in a barrel.

H2N: Well, I mean he wasn’t totally a dick in Present Company, I mean, I felt for him, he’s in an unhappy situation.

FR: Well, I definitely lean towards “unlikable characters,” as people call them, but I just find people like that more interesting. 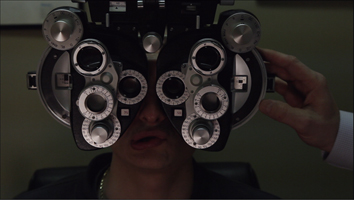 H2N: Do you find it hard to play characters who are not like you?

H2N: I mean, for example, I was in a film of someone’s where we played ourselves, and the other crew members had a tougher time at playing themselves, but I found playing myself to be really easy—[FR laughs]—and maybe that was because I feel like I’m acting a lot already in life? But then I took this acting class right after, and I could not play a character who was an asshole extrovert.

FR: Well, I have a lot of friends who are assholes, you know, and people who I love who are assholes. I don’t dislike them because they’re pricks, that’s who they are. I mean, if you can just empathize with somebody and where they’re coming from, go with it.

H2N: Right, I mean I think that’s what making films is mostly about: empathy. There’s also something I noticed in each of your films. Something you’ll put in there that is sort of at odds with the realism of the rest of the film, for example the flashback early in Quietly on By. As for Tiger Tail, on your site you talk about how the film is slightly surreal, and I guess what I’m getting at is the thing that happens when your character goes to the apartment with the girl from work, Brandy. I don’t know if we should talk about this though in the interview though, because it’s kind of a spoiler, right? [FR laughs] It’s a really disorienting moment. Did you think that having such a moment in there was a risk? 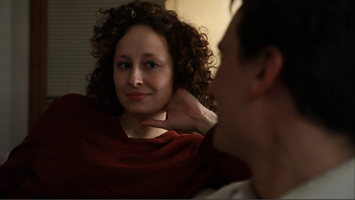 FR: You know what? You get to a point where you really don’t care, because it’s a long shot that the people are going to see the movie in the first place, it’s a long shot that anyone is going to care, so you just make whatever the hell you wanna make, you know? And then it’s always a surprise to me when people respond to it.

H2N: I felt like the rug was pulled out from under my feet at that point, and what I thought was romantic kind of dissolved away and was replaced by cold, hard reality.

FR: I mean, romance goes away at a certain point. You displace your feelings after a certain amount of time, it’s kind of like, “Oh wasn’t it fun when we did this?” But it’s a new relationship now, and if you can’t enjoy it, you’re going to, you know, do what happens in the movie.

H2N: So I have a sort of cliche question for you: do you write scripts, or do you work with the actors on their characters beforehand, or is it a sort of mix of the two?

FR: No, there’s a full script. I mean, I’m a writer; there’s a script. And I think what happens is I just err on the side of letting the actors do it the way they want to do it, and I don’t have a specific way I want to have it done. I put people in the movie to do it their way, and hopefully it’s better than what I imagined.

H2N: Your films strike this balance, amazingly well I think, of being both loose and natural and being planned out. There’s a sense that it’s off-the-cuff but there’s a writer’s touch as well. 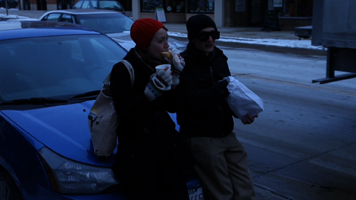 FR: Well, to that I would just say “thank you.” [FR laughs] I mean, I’ve always thought of it kind of like a jazz band. Everyone knows the music, you show up, you play, and you get it right. I don’t sweat the details, you know, I’ve been in very few actor conversations, the people I work with just do it the way they want to do it, and if I have a suggestion, I give it to them, and it goes that way.

H2N: And I guess, appropriately, you use jazz music in your films.

H2N: How did you get John Medeski to score your last two?

FR: I met him the day we recorded the score for Audrey. I approached him as a fan, and I think it appealed to him what I wanted to do, and we just decided to do it. I mean the score for Tiger Tail was recorded in four hours. The guy is at the top of his game, and we’d sort of bounce around and create things, and then, “Boom, okay, we got it,” and then move on to the next thing. It’s cool to see what genius is, I mean he can make an entire composition in his head, and make it work. It’s amazing. There are some things that need to be timed out, so I’d get a stopwatch, and I’ll queue him about when he needs to start wrapping it up, and he’ll wrap it up, and it’s neat, man. It’s proof! It’s hard to know what talent is, but you know it when you see it.

H2N: Hopefully you can keep working with him.

H2N: So your DP, Mike Gibbiser, I’ve seen one of his movies, Finally, Lillian and Dan. I saw it about five years ago. Did you guys meet by just both being in the Chicago independent filmmaking scene?

FR: No, he wasn’t in Chicago at the time. I met Mike [at the Harvard Film Archive in 2006], our films played together there, and I saw his movie and I liked it very much, and when he moved to Chicago, we would see each other all the time, and he would always say, “If you need help with anything just let me know.” And when I needed someone to shoot Tiger Tail, I had just watched Finally, Lillian and Dan again, and I was just impressed by how artful the compositions were, but it was just standard coverage, which is what I do. Because I’m done shooting my own films. I got tired of people complaining about how they looked. Whenever there was a review they’d always talk about the way it looked, so I said, “You know what? F**k it.” And I love collaborating. I love having a DP. I loved having him there. He made it a better movie.

H2N: And David Lowery’s stuff for Audrey was really good too.

FR: Yeah, I loved it. I mean, I like the way Quietly on By, Hohokam, and Present Company look, but I get why they don’t look as good as what somebody else can do. [FR laughs]