(Tiger Tail In Blue was nominated for a 2012 “Best Film Not Playing At A Theater Near You” Gotham Award, which is sponsored by MoMA’s Department of Film, in association with IFP and Filmmaker Magazine. In conjunction with this nomination, the film has its official world premiere at MoMA on Saturday November 17th and Sunday November 18th. Visit the film’s official website to learn more.)

Luis Buñuel’s That Obscure Object of Desire featured the middle-aged, dapper Fernando Rey pursuing the elusive, sensuous Conchita played by two different actresses. Fernando is tortured by each of the women by being brought right up to the edge of sexual consummation, only to be denied at the last minute in various ways. In Frank V. Ross’s seventh feature, Tiger Tail in Blue, Chris (played by Ross himself) is living out the frustration of working nights at a restaurant while his wife Melody (Rebecca Spence) teaches during the day. They connect only late at night, a few hours before she has to get up to go to school.

At work, Chris finds himself caught up in an ongoing flirtation with a waitress, who the credits list as “The Brandy” and who is initially played by the same actress—Rebecca Spence—who plays Melody. At first, this may appear confusing, but slowly the two characters meld and we come to recognize how important particular environments and situations can be when it comes to encouraging or discouraging romance. One night, Chris lets the workplace flirtation modulate and he takes it right up to the edge, forcing himself to reckon with his commitment to marriage and monogamy (it is at this point that a different actress, Megan Mercier, takes over the role of “The Brandy”). 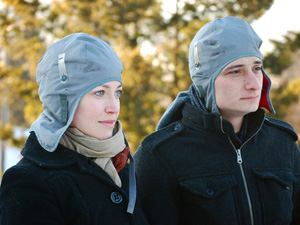 On the surface, Tiger Tail in Blue is a hyper-real portrait of young working class life, yet the deliberate repetition of daily routine lays bare the formal severity of that life, which is actually its most oppressive quality. The days are not that different from one another and the nights are the only place where something unexpected might occur. Chris comments a few times about how he has to take reservations for parties months in advance and then it seems like all of a sudden that day is upon him—first New Year’s Eve and then June again. Day in and day out and the months pass by and we get older.

Ross is perfectly confident to not stage anything bigger than a snowy sled ride or midday donut run, and he orchestrates Tiger Tail in Blue with a mid-tempo formal sophistication that is not unlike the smooth jazz grooves of John Medeski and Chris Speed’s original score. The film is a measured look at working class married life that dares to remain true to life’s actual, mundane reality. It is within that formal commitment that we find truth and revelation; the question of what we do with that knowledge is left for us to answer.

Will this particular marriage get better before it gets worse? Is this the beginning of trouble or the end? Or, perhaps, the repetition and routine of married life and the struggle to remain committed is, in the end, the whole point. Ross’s tiny gem of a film will sneak up on you and get under your skin like a microscopic bedbug. See it with your spouse or loved one, and if the film appears too simple to discuss afterwards, ask yourself to repeat the full lyrics of the song Chris sings to his wife in the final scene.

GARRY WINOGRAND: ALL THINGS ARE PHOTOGRAPHABLE