Fb. In. Tw. Be.
Drama
In Theatres
Latest Reviews
On DVD
Reviews

through MPI Home Video. It was released theatrically by IFC Films. Visit the film’s page at the IFC website to learn more.)

As with most end-of-the-world cinema, Perfect Sense is faced with the task of reconciling the competing urges to to be both sweeping and intimate, global and personal. On one level, it concerns itself with a series of separate-but-related epidemics in which each of the senses—first the chemical faculties of smell and taste, then sound, and finally sight—is suddenly and irremediably deadened; more fundamentally, it tells of a love affair between a chef and an epidemiologist named Michael (Ewan McGregor) and Susan (Eva Green), respectively. It’s not unprecedented, the understated apocalypse film, but David Mackenzie’s impressionistic take on the genre distinguishes itself for how one-sided its approach is: this is above all else a mood piece in which the increasingly dire goings-on nevertheless take a backseat to sweet nothings whispered into the ear and long shots of bedrooms flooded with early morning light. It’s less a linear progression of scenes whose implications (narrative, thematic, what have you) are readily apparent than a patchwork of vividly-realized emotion and soft-spoken romance. Ineffability is a plus here; Mackenzie’s film is meant to be felt first, understood second—and in this regard it’s often quite affecting.

In tone and structure, Perfect Sense is at once scattershot and precise. Evocative montages—seabirds flying over grey cities, people breaking down in tears as they wonder what’s happening to them and why, small moments of love and sadness—abound; quiet piano chords are a constant. Elements such as these are common enough in movies of this sort, but they’re used subtly (and genuinely) enough here to feel earned, even vital. The fact that it isn’t an airborne virus which one might conceivably avoid via quarantine or luck but rather an eventuality which takes hold of literally everybody at one point or another inspires more resignation than fear, making the question not if but when. There’s a largely unspoken sense of gloom to the characters’ reactions to all this this that’s so quietly alluring as to make us forget that, in broad strokes, the film’s plot is hardly anything new. 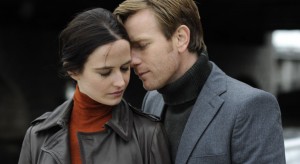 In a way, what Mackenzie achieves here is not unlike what Lars von Trier set out to create with his Melancholia: a vision of the self-centered ways in which people react to anything, whether it be a blossoming romance or the end of all things. What happens to other people is always and without question secondary to what happens to you, and so Mackenzie’s intimate approach never feels unnatural. Rather than critique or even bemoan the way its two leads get lost in each other, Perfect Sense celebrates it. The film features little newsreel footage pertaining to its worldwide afflictions and makes even less of an attempt at conveying the immense scope of these events via country-hopping sequences or a global cast. There’s no text at the bottom of the screen alerting us to what city we’re in or the precise date and time at which all this is occurring. What happens out there is precisely that: distant, removed, and of little concern when your own world is falling apart. As such, the movie doesn’t hide for an instant the fact that it revolves solely around Michael and Susan.

Tellingly—and crucially—touch is the only sense that’s never threatened. This elision is no less implicative of Pefect Sense‘s inclination toward the sensual than how catastrophic its portrayal of the other faculties’ disappearance is, but it does point toward a certain sympathy for its characters. There are more than enough love scenes to suggest that the inability of these two lovers to feel one another would be far worse than everything else that befalls them, and so sparing them this tragedy may be seen as a kindness. “It’s dark now but they feel each other and know all they need to know” is spoken late in the film as a verbal reminder of this fact, but it’s made unnecessary by the wordlessness with which the preceding moments convey the same idea.