, and at Amazon Instant through MPI Home Video. It premiered at the 68th Venice Film Festival and was released theatrically by IFC Films on March 23, 2012. Visit its official website to learn more. NOTE: This review was first published on Thursday, March 22, 2012 as a “Hammer to Nail Pick of the Week” at the Filmmaker Magazine blog.)

A number of recent films have collectively suggested that the more global, or even cosmic, the crisis, the more intimate the response. This was done most recently in Perfect Sense but also last summer’s Another Earth and, to a lesser extent, The Tree of Life, about which it might be more accurate to say that the cosmic is crafted from the intimate. (Melancholia breaks from this trend somewhat, and its cold remove is part of what makes it so disconcerting a film.) This art-house apocalypse continues in Abel Ferrara’s 4:44 Last Day on Earth, one of whose touchstones is a close-up on two lovers’ bodies as they sleep together: this, the longtime writer-director says repeatedly, is how we console ourselves in times of crisis. And yet, as a viewing experience, what comfort this lavishly titled, austerely shot film brings is mostly cold. Its largely confined setting of a single New York City apartment restricts our knowledge to that of the characters; there’s no omniscience to be found from either within or without.

Of the films listed above, this is second only to Malick’s—far from a complaint. “Fair warning but no possible means of escape” is how a TV news reporter (NY1’s Pat Kiernan, playing himself) summarizes the environmental catastrophe about to take place; take this as 4:44‘s premise in a nutshell. Ferrara allows his romantically involved protagonists—Willem Dafoe’s Cisco, at least, as Shanyn Leigh’s Skye spends much of her time retreating into a large-scale painting and meditating—to ruminate on the impending end but not the chance to delude themselves into thinking they might survive it. This is a durational, site-specific experience that isn’t meant to be enjoyed so much as taken in in much the same way as the characters. It starts a little over half a day before the early-morning apocalypse, and in the meantime Cisco and Skye alternate between watching Al Gore resist the urge to say “I told you so” on the news and dancing to the twangy guitar stylings of a musician friend over Skype. (As someone with an aversion to this recurring music, I suspect it’s meant to be more off-putting than soothing.) In focusing so much on that program, as well as the iPad on which Skye listens to and watches an apparent zen master offer his take on the coming events, Ferrara aims to create an of-the-moment environment that forces us to consider what it would be like if this were to actually occur tomorrow—or, better yet, today. 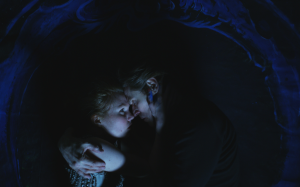 “We are all about to experience the same fate at the same moment,” says that same newscaster by way of signing off for good; this is, if nothing else, a shared event with the potential to unite rather than divide. And yet it doesn’t quite do that, for the most part, as much of Cisco and Skye’s time is spent quibbling over now-petty differences and speaking with others via the internet. In one scene, the young boy who delivers the couple’s Chinese food asks to use their computer to call his family overseas on Skype. The digital conversation is brief, untranslated, and of little comfort to anyone involved. They’re never going to see, touch, or speak to one another in person again, and the boy looks crestfallen as he folds the laptop closed. But knowing that beforehand didn’t stop him from calling in the first place. 4:44 is peppered with moments of similarly well-intentioned futility, and Ferrara is clearly keyed into the various ways in which people try to calm (or at least distract) themselves as they feel the walls closing in. There’s a feeling of cold acceptance to the proceedings, with essentially no one raging against the dying of the light in any real way. Cisco and Skye’s loft apartment is full of buddhist iconography, emblems of the sort of tranquility they’re hoping to attain before the fateful minute finally comes to bear. There are points to be made here on what we’ve done to our planet and the layers of technology between us and the people we mean to connect to—it isn’t his own life that flashes before Cisco’s eyes, but rather a collage-like assortment of video clips—but rarely in a way that feels didactic. No, the emphasis here is on the characters in all their flawed, despairing glory, and the view from their eyes is a chilling one indeed.

A fight between the couple leads Cisco to venture to a friend’s place with only hours left on the clock, and once there he finds an even more strangely calm atmosphere than the one he left. Cisco, a two-years-sober alcoholic and heroin addict, is thinking of willfully relapsing; a friend in the same boat advises against it. For him, the end of the world is hardly just cause to go to his death with anything but a clear mind. “The world’s been ending ever since it started and we’ve been dying ever since we were born—don’t take this shit too seriously,” he warns. Addiction is omnipresent in 4:44 even if it’s more of a backdrop than a driving force.

Near the end, Cisco looks around his neighborhood from his rooftop with a pair of binoculars. One man shares a steak with his eager dog, a woman moves about her apartment seemingly unbothered, another man aims his shotgun into the air after contemplating turning it on himself. All the while, what looks like the aurora borealis floods the sky to herald what’s soon to be. Life goes on, even as it barrels toward death.