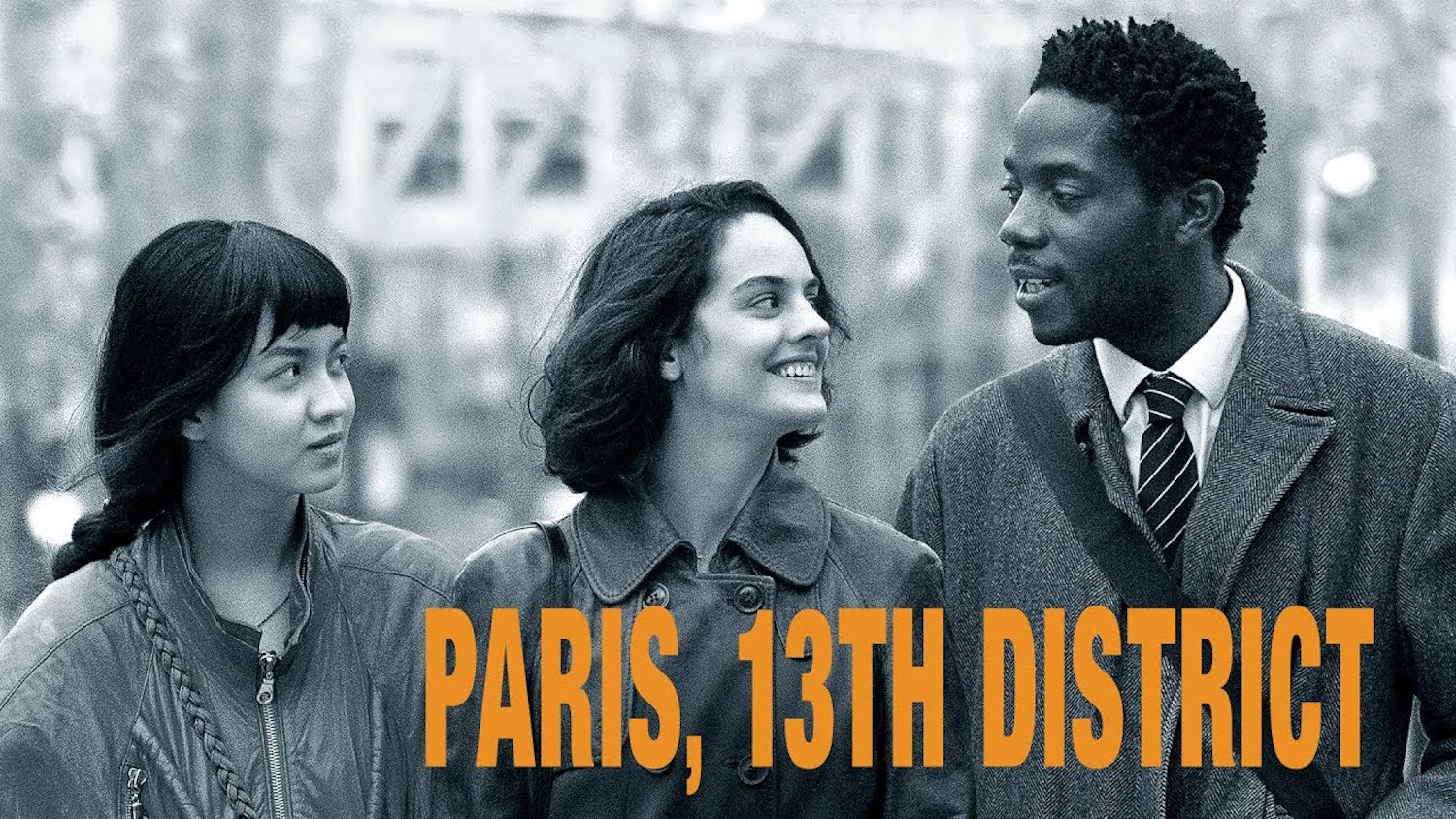 (Rendez-Vous with French Cinema takes place at Film at Lincoln Center from March 3 – 13. M.J. O’Toole has this movie review of Paris, 13th District which plays on March 4 and 7. It will be released in theaters on April 15 from IFC Films.)

Lights glimmer and bodies embrace in Jacques Audiard’s Paris, 13th District. An adaptation of American graphic novelist Adrian Tomine’s short comic stories, Audiard’s ninth feature is a fresh, unapologetically sexy film about modern sexual relationships which is sort of what connects the young, fresh-faced protagonists at the center. Shot in crisp black-and-white, the story is set mainly in the titular 13th arrondissement of Paris which is known for its high-rise apartment blocks and principal Asian community. Audiard takes a step back from the gritty, crime-filled backdrops from his previous films such as A Prophet and the Palme D’or winner Dheepan, but maintains his capacity for social realism. As a widely acclaimed, but white male filmmaker making a movie about modern-day sex and sexuality, he is wise for co-writing it with two esteemed female French filmmakers: Celine Sciamma (Portrait of a Lady on Fire) and Léa Mysius (Ava), resulting in a truly witty, genuine, and thoughtful screenplay that helps subvert the male gaze. What unfolds is a French New Wave throwback that considerately tackles both the joys and drawbacks of relationships in the era of Tinder and OnlyFans.

The film opens up with Émilie (outstanding newcomer Lucie Zhang), a sharp-tongued young French-Taiwanese woman who comes from a well-educated background, but prefers a life of little to no responsibility. She’s bored with both her call center job – which she’s about to be fired from – and life itself. She puts out an ad for a roommate and gets a response from Camille (Makita Samba), a dashing, young black man who Émilie mistakenly presumes is a woman prior to their introduction. Despite the awkward first few seconds of their meeting, they hit it off and bond over their own sex/love lives. “I channel professional frustration into intense sexual activity,” Camille casually tells Émilie during their roommate interview. The pair quickly get it on in the bedroom and start a roommates-with-benefits arrangement that’s doomed to get even more complicated. Camille, a high school teacher about to quit his job to focus on his doctorate thesis, is suave and easy-going. However, at times he doesn’t hesitate to give his nickel’s worth of pompous criticism to whatever and whoever, including his teenage sister (Camille Léon-Fucien), an aspiring stand-up comic. A lot of these characters, though, aren’t afraid to call each other out on their bullshit. Throughout the film, witty humor can be found in the little social interactions, whether awkward, aggressive, or flirtatious.

The film soon segues over to Nora (Noémie Merlant, breakout star of Portrait of a Lady on Fire), an eager but insecure thirty-something woman from Bordeaux who arrives in Paris to resume her law studies. Things soon take a wrong turn for her when she wears a blonde wig to a student party and gets mistaken for a well-known camgirl, Amber Sweet. Bombarded with bullying from her fellow students, she leaves law school and takes a job in real estate where her colleague happens to be…Camille, who is temporarily managing his friend’s business. He is impressed by her knack for the job and as attraction takes early form, she straightforwardly sets professional boundaries with him, which include addressing each other by their last names and no ogling. This signifies her capacity for restraint, compared to Camille and Émilie who take boundaries far less seriously. But Nora soon takes a leap at intimacy when she ends up striking a non-erotic virtual friendship with the real Amber Sweet (Jehnny Beth, frontwoman of Savages), in which they bond over experiences including childhood and humiliation. This becomes an unexpected starting point in a path to self-discovery.

When it comes to the topic of sex, the film keenly highlights the mixture of thoughts and feelings that come with it. Whether it be Nora’s lack of confidence in a moment where she doesn’t feel satisfied, or when Émilie enjoys a random app hookup so much she does a little ballet dance out of ecstasy in one of the film’s more sublime moments. But their desire for hooking up might come from an inner need to make a connection while dealing with more personal struggles. Camille is secretly mourning the recent passing of his mother, and Émilie has a seemingly somewhat strained, distant relationship with her family. She’s even uneasy about visiting her dementia-stricken grandmother who is living in a nursing home. Millennials can often be portrayed in a somewhat satirical, narcissistic light (e.g. Girls or Search Party), but here Audiard doesn’t place any judgment on these characters and depicts them as humanly imperfect, vulnerable people with rather decent intentions.

Paris, 13th District is an overall rejuvenating and audacious examination of both the physical interconnectedness and emotional isolation of life. Excellent performances, especially by breakouts Zhang and Samba, convey the complexities of modern-day individuals who struggle with their overall sense of direction. It may not be Audiard’s most prolific work to date, given his more modest approach to storytelling here – compared to A Prophet or Rust and Bone. But it is by far his most joyous that speaks to the current moment. Aided by stunning b&w cinematography by Paul Guilhaume and a vital electronic score by Rone, the film pulls you in and keeps you invested all the way through. It may seem at times that its eroticism tries to compensate for something, but it doesn’t compromise the film of its heart. Paris, 13th District might not be the most deep-rooted of character studies, but Audiard keeps us entertained by these protagonists and has us hope for their own personal triumphs.