Eric, aka “Taco,” has just lost his best friend to the streets. But instead of attending the funeral, Taco would rather pay his respects by doing what he and his friend loved most: heading to a nearby stable, grooming and taking his friend’s favorite horse, Chance, out for a ride. On his way to the stable, Taco is confronted by some neighborhood kids, who express their condolences before suggesting that that only way to redeem his best friend’s honor is for him to grab a gun and handle his business. Taco demurs. 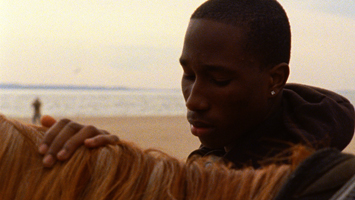 At the stable, the head trainer orders Taco not to take Chance for a walk, but Taco doesn’t listen. Instead, he throws a saddle on the horse and journeys through the cement streets of East New York, winding up at the Coney Island boardwalk. An innocent connection with a young Russian-American girl brings a flicker of optimism to the day, but when he realizes he’s been duped, Taco’s sorrow widens.

The image of a young black teenager trotting on a horse through inner city New York is as obvious a metaphor as there could be: the modern ghetto is America’s new Wild West. Yet, fortunately, Choe brings an honest naturalism to her directing, which subdues the bluntness of that metaphor. As a result, I Am John Wayne speaks first and foremost as a story of personal, individual loss. But it also stands firmly as a sobering wake-up call to those viewers who shrug their shoulders every time they hear that another inner city youth has been murdered.

A film like this could go wrong in so many ways that it becomes all the more exhilarating to reach the end credits and realize that Choe has somehow kept it on course. She has chosen her collaborators wisely—cinematographer Andres Karu shoots with handheld intimacy on fittingly grainy Super 16mm, and composers This Is Your Captain Speaking bring a Western-inflected edge to their electric guitar score. Yet ultimately, what makes I Am John Wayne so successful is that Choe never sensationalizes or romanticizes this inner city environment. The distinction is a major one: she has chosen to see the world through her character’s eyes, not her own.