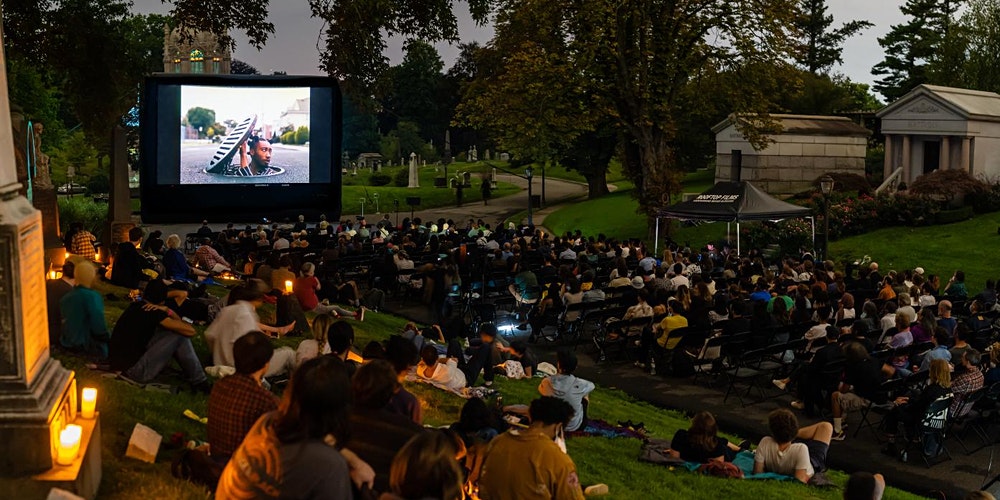 Summer is almost here, which means Rooftop Films will be making its comeback to New York City’s numerous outdoor locations. The lineup for this year’s summer series includes numerous festival favorites that have premiered at Sundance, SXSW, and even Cannes.

Tickets for select screenings are now on sale on the Rooftop Films official website. More tickets will be on sale, as well as locations and dates announced in the coming weeks.

For the sixth consecutive year, the Rooftop Films Summer Series will be presented by SundanceTV. Additionally, Rooftop’s exclusive liquor sponsor Diageo will present 30 pre- and post-screening receptions throughout the summer.

Check out the summer lineup + screening dates/locations below:

Hold Your Fire
Von King Park Amphitheatre
(dir. Stefan Forbes I Documentary Feature I USA I 95 mins)
Brooklyn 1973. When Shu’aib Raheem and friends attempted to steal guns for self defense, sparking the longest hostage siege in NYPD history. The screening will take place in Von King Park in Bed-Stuy, just blocks from the location of the historic events depicted in the film. Following the screening we will present a conversation with filmmaker Stefan Forbes, producer Fab 5 Freddy, and special guests.

Watcher
Industry City
(dir. Chloe Okuno | Fiction Feature | USA | 96 mins)
A woman moves into an apartment with her fiancé and is tormented by the feeling that she is being stalked by someone in an adjacent building. Starring Maika Monroe, Karl Glusman, Burn Gorman.

Neptune Frost
The Roof of the Old American Can Factory
(dir. Saul Williams & Anisia Uzeyman | Rwanda, USA | 105 mins)
Multi-hyphenate, multidisciplinary artist Saul Williams brings his unique dynamism to this Afrofuturist vision, a sci-fi punk musical that’s a visually wondrous amalgamation of themes, ideas, and songs that Williams has explored in his work, notably his 2016 album MartyrLoserKing. Co-directed with his partner, the Rwandan-born artist and cinematographer Anisia Uzeyman, the film takes place in the hilltops of Burundi, where a group of escaped coltan miners form an anti-colonialist computer hacker collective. From their camp in an otherworldly e-waste dump, they attempt a takeover of the authoritarian regime exploiting the region’s natural resources – and its people. When an intersex runaway and an escaped coltan miner find each other through cosmic forces, their connection sparks glitches within the greater divine circuitry.

The Janes
The Roof of the Old American Can Factory
(dir. Tia Lessin | Documentary Feature | 101 mins)
In the spring of 1972, police raided an apartment on the South Side of Chicago. Seven women were arrested and charged. Using code names, blindfolds, and safe houses to protect their identities and their work, they built an underground service for women seeking safe, affordable, illegal abortions. They called themselves Jane. Facing off against the mafia, the church, and the state, the Janes exhibited unparalleled bravery and compassion for those most in need.

Beba
The Roof of New Design High School
(dir. Rebecca Huntt | Documentary Feature | USA I 79 mins)
Beba is a poetic and raw coming of age tale, in which a young NYC born and bred Afro-Latina stares down trauma with unflinching courage.

The Sacred Spirit (Espíritu sagrado)
The Roof of the Old American Can Factory
(dir. Chema García Ibarra | Fiction Feature | Spain | 97 mins)
The uncanny and the unexpected combine to devastating effect in The Sacred Spirit, the extraordinary debut feature from Chema Garcia Ibarra.

Let the Little Light Shine
The Pier at Brooklyn Army Terminal
(dir. Kevin Shaw I Documentary Feature I USA I 86 mins)
A high-achieving elementary in Chicago’s expanding neighborhood is a lifeline for Black children, until gentrification threatens its closure

The Sea Ahead
The Roof of the Old American Can Factory
(dir. Ely Dagher I Fiction Feature I France, Lebanon, Belgium, USA I 115 mins)
Jana suddenly returns to Beirut after a long absence. She finds herself reconnecting with the familiar yet strange life she had once left.

We Met in Virtual Reality
The Roof of the Old American Can Factory
(Joe Hunting | Documentary Feature | United Kingdom | 91 mins)
Filmed entirely inside the world of VR, this verité documentary captures the excitement and surprising intimacy of a burgeoning cultural movement, demonstrating the power of online connection in an isolated world.

A Love Song
Green-Wood Cemetery
(dir. Max Walker-Silverman | Fiction Feature | USA | 81 mins)
At a campground in the rural West, a woman waits alone for an old flame from her past to arrive, uncertain of his intentions while bashful about her own.

I Didn’t See You There
The Pier at Brooklyn Army Terminal
(dir. Reid Davenport I Documentary Feature I USA I 76 mins)
A disabled filmmaker launches into an unflinching meditation on spectacle, (in)visibility, and the corrosive legacy of the Freak Show.

I Love My Dad
The Roof of the New Design High School
(dir. James Morosini | Fiction Feature | USA | 90 mins)
A hopelessly estranged father catfishes his son in an attempt to reconnect. Inspired by a true story. Like, this literally happened to me.

Hannah Ha Ha
Brooklyn Commons
(dir. Jordan Tetewsky | Fiction Feature | USA | 75 mins)
A kindhearted townie living with her father is pulled in different directions by her brother who returns and imposes his lifestyle on the family.

Welcome to Riotsville, USA, a turning point in American history where the protest movements of the late 1960s came into conflict with increasingly militarized police departments. Focusing on unearthed military training footage of Army-built model towns called “Riotsvilles,” where military and police were trained to respond to civil disorder in the aftermath of the Kerner Commission created by President Lyndon B. Johnson, director Sierra Pettengill’s kaleidoscopic all-archival documentary reconstructs the formation of a national consciousness obsessed with maintaining law and order by any means necessary. Drawing insight from a time similar to our own, Riotsville, USA pulls focus on American institutional control and offers a compelling case that if the history of race in America rhymes, it is by design.

Emily the Criminal
(dir. John Patton Ford I Fiction Feature I USA I 94 mins)
Faced with a series of dead-end job interviews, Emily soon finds herself seduced by the quick cash and thrills of black-market capitalism.

Resurrection
(dir. Andrew Semans I Fiction Feature I USA I 103 mins)
Margaret’s life is in order. Everything is under control. That is, until David returns, carrying with him the horrors of Margaret’s past. Starring Rebecca Hall and Tim Roth

This is What We Mean By Short Films (Opening Night)
Green-Wood Cemetery
Hi Strangers, It’s Been Awhile. For 26 years, Rooftop Films has celebrated the coming of summer with the best short films of the last year. Come party with us at the cemetery!