THE CURBSIDE CRITERION: WOMAN OF THE YEAR

(We here at Hammer to Nail are all about true independent cinema. But we also have to tip our hat to the great films of yesteryear that continue to inspire filmmakers and cinephiles alike. This week, our “The Curbside Criterion” continues where HtN staff can trot out thoughts on the finest films ever made. Today HtN Lead Critic Chris Reed goes deep into this voluminous release of George Stevens’ Woman of the Year .)

If for no other reason than that it marks the first of nine collaborations between on- and off-screen partners Katharine Hepburn and Spencer Tracy, George Stevens’ 1942 dramedy of sexual manners, Woman of the Year, would be well worth watching. Since it is also the winner of the 1943 Oscar for Best Original Screenplay, it offers much more than just the joy of seeing two of Hollywood’s greatest actors fall in love. Full of witty banter and sharply observed insights into male-female dynamics, the movie delivers the narrative goods and then some. Unfortunately, an ending engineered after early preview screenings indicated that audiences wanted to see Hepburn’s dominant career woman brought down a peg mars the otherwise delightful experience. Still, it is an important part of movie history, and a mostly enjoyable viewing experience.

Now, in a beautiful 2K restoration, comes Criterion’s Blu-ray treatment of the film. With crisp, high-contrast black-and-white images that showcase director Stevens’ innovative approach to camera and lighting, the movie has always been a superlative example of the chiaroscuro techniques of the period. With this release, the film’s cinematography shines anew. Hepburn and Tracy have never looked better: she was 35 and he was 42, and both were in their prime, both as actors and movie stars.

Still, Hepburn was only recently recovering from a downturn in her career in the late 1930s that she successfully reversed with 1940’s The Philadelphia Story, a film she, herself, picked as a tool to change her fortunes. She knew that she came off as arrogant, and that viewers liked her more if she got something of a comeuppance. Tracy’s career had only been moving up throughout the 1930s, with films like Captains Courageous (1937) and Boys Town (1938) garnering him back-to-back Oscars (Hepburn had won in 1934, for Morning Glory, but did not win again until 1968 and Guess Who’s Coming to Dinner). That pattern, of arrogance and comeuppance, repeats itself here in Hepburn’s character, for better and for worse.

Hepburn plays superstar political journalist Tess Harding. Tracy plays Sam Craig, a sports columnist at the same newspaper. She’s all fashionable poise, while he looks like a well-lived-in suit. After an initial rivalry over the importance of baseball vis-à-vis the growing threat of war un Europe, they fall for each other. It’s not an easy match, however, and one of the weaknesses of the story, for me, is that it’s never entirely clear why Tess should find so appealing, other than the fact that he is played by the charming Tracy: they have absolutely nothing in common. Leaving that issue aside – inherent to virtually all romantic comedies – the movie breezes along, mixing the serious and the comic to great effect. And despite the unfortunate conclusion, I was happy to see (it had been a while since I had first watched the film) that Sam is not the one who wants Tess to give up her career, but merely the culture of the time.

With many illuminating special features, this is a wonderful Blu-ray to own for cinephiles, as well as for fans of Hepburn and/or Tracy and/or Stevens. In fact, there is almost too much material to handle (though nothing like what is in Criterion’s overwhelming Guillermo del Toro Trilogia) What follows is a brief review of each included extra, including the booklet essay.

“A Woman’s Place,” Essay by Stephanie Zacharek, Chief Film Critic at Time magazine: This is more of an analysis of the movie and its themes than a history of its production. As such, however, it is a very solid essay. I like Zacharek’s breakdown of the sexism of the time and how the producers, writers and director tried to respond to the initial audience reaction. Much of what is in the essay is also covered in the other special features, albeit here it is in a more concentrated form. Her discussion of the stars’ romance, and how it blossomed on the set, is lovely. 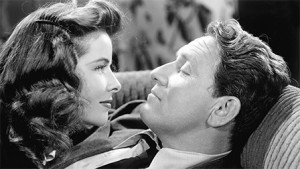 There are 7 special features:

And that’s it. Mostly all excellent extras, and even if, like me, you don’t like all of them equally, they still make for a great collection.