(Better This World is now available on DVD through Passion River. It world premiered at the 2011 SXSW Film Festival, and subsequently won Best Documentary Feature awards at both the San Francisco International Film Festival and Sarasota Film Festival. It was an official selection of the 15th annual DocuWeeks program and opened at the IFC Center in New York City on Friday, August 12, 2011. Perhaps more helpfully for readers everywhere, it debuted on television on September 6th as part of PBS’s POV series, and streamed online September 7th through October 6th. Visit the film’s official website to learn more.)

[EDITOR’S NOTE: This review was written with the intention of being as spoiler-free as possible, and while it doesn’t get into specifics regarding the dramatic reveal, Better This World remains a film that is best appreciated with as little prior knowledge as possible.]

“We had to absolutely prepare for a catastrophic terrorism incident,” says an FBI Special Agent involved in planning security for the 2008 Republican Convention, “and the planning ideology that we used was that we had to assume that there was a 100% chance that there was gonna be an attack.”

Better This World follows the story of David McCay and Bradley Crowder, two idealistic young activists from Midland, Texas, George W. Bush’s hometown, who made the trip to Minneapolis in September of ’08 and got to experience the consequences of this ideology first-hand, walking into an incredible government plot to convict them as domestic terrorists.

The convention was in a sense the last hurrah of the Bush era, and all of the administration’s overreacting, bad judgment, disinformation, and disdain for civil rights was seemingly poured onto the streets of Minneapolis to counter the demonstrations, treating people’s legitimate desire to protest like an act of war. The film takes us into the heart of the madness: informants everywhere, police raids and preemptive arrests of activists before the convention even gets started. Even F16 fighter jets standing by. 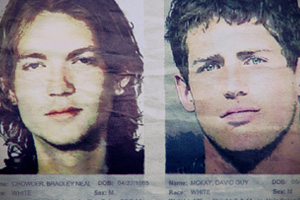 David and Bradley are smart, articulate, principled and committed individuals, and they effortlessly win your sympathy in their prison interviews. They trace the story of how they got involved in activism, mentored by a prominent Austin-area militant, and how, fired up to prove their mettle (and maybe with a fatal dose of pride) their judgment lapsed at a crucial moment—which ironically threw them into a situation where the stakes are enormous and character is truly put to the test.

With the two men facing serious prison sentences, the film gets up close and personal, examining the strain on their relationships with loved ones. While Bradley keeps a level head, David, facing more serious charges, begins to lose his grip emotionally. As the prosecution turns up the heat, will they remain loyal to each other?

Better This World illustrates the kind of Orwellian society we have to a certain extent turned into. Bradley and David’s every move is tracked; a trip to Walmart, in particular, is captured by security cameras in vivid color and astonishing detail. A detective shamelessly claims that a conversation that he all but scripted himself “chilled my blood.” A prosecutor justifies himself with soft-spoken demagoguery, casually flavoring his argument with a 9/11 non-sequitur. TV news mindlessly parrots the government’s self-serving sound bites. Villains abound in this film, and what’s most disturbing is how they settle into cozy rationalizations for their actions, oblivious to the repercussions for civil liberties.

Directors Kelly Duane de la Vega and Katie Galloway skillfully assemble it all into a gripping and suspenseful narrative. They get access to all the major players, and capture particularly compelling footage of David and his girlfriend discussing their future in the days leading up to his trial. The story has Shyamalan-worthy plot twists, an abundance of shocking images of the streets of Minneapolis during the convention, and touches of dark humor, like the inclusion of the cheerful recorded voice that abruptly cuts off prison conversations: “Thank you for using Evercom.”

It’s been said that we create what we fear, and Better This World draws a clear picture of how the government’s paranoia and hyperbole made it necessary to manufacture something that could be called terrorism. That the real story is being told is at least some vindication for what happened to David and Bradley.

QUEEN OF VERSAILLES, THE