(The 59th San Francisco International Film Festival ran April 21-May 5. Stay tuned to HtN for reviews as they start pouring in!)

Despite our founding principals, the United States is generally terrible at taking care of our own, especially if they suffer from mental illness or addiction. Newly released prisoners are just one of the many groups the system fails on a regular basis. Kelly Duane de La Vega and Katie Galloway’s vital documentary, The Return, details just one aspect of the myriad flaws in the American criminal justice system.

Following the voter-approved repealing of California’s Prop 184, also known as the Three Strikes Law, thousands of non-violent prisoners with life-sentences suddenly qualified for appeals. But you can’t strip someone of their humanity, as our prison system does, then dump them on the outside and expect them to thrive.

After the law was enacted in 1994, the prisons quickly filled up with non-violent offenders, disproportionally people of color, and did little to decrease crime rates. Still, they upheld the proposition, ruining thousands of lives in the process. The Stanford Three Strikes Project, helmed by attorneys Michael Romano and Susan Champion, sought to help as many of these people as possible, and were able to secure appeals thanks to 2012’s voter-approved Prop 36, which overturned the Three Strikes law.

But unfortunately, freedom did not lead to an immediate happy ending. None of these men ever expected to be released, and so they had burned bridges, cut ties with their families, and lost all hope in prison. Re-integration would take time, patience, vigilance, and resources. The film’s main focus is the re-integration of two men, whose third strikes were minor infractions, and the project that provides an opportunity for redemption to those previously dismissed as lost causes.

Kenneth Anderson is a big-hearted man who has long struggled with drug addiction. He spent 14 years in prison, following his third strike, snatching a purse in a desperate hour. He was forced to abandon his wife and four children, believing he would never see them again. He wasn’t the only one punished for his crimes. His wife was suddenly faced with raising their family on a single income. As she so eloquently puts it, “he was serving inside while I was serving outside”.

Bilal Chatman had little family to speak of – just his mother, who is now elderly and bed-ridden. His crime was selling $200 worth of drugs to an undercover police officer. He had served 11 years prior to release. A halfway home helped him get back on his feet but there aren’t enough of these places around to accommodate appealed Three Strikes prisoners, let alone those who served their entire sentence.

Both men have paid for their crimes many times over, but we don’t make it easy for ex-cons to turn their lives around. Everyone helped by the Three Strikes Project is faced with having to re-wire their brains, since, prior to Prop 36, they had no reason to believe they would ever again know a life on the outside. Bilal had written off having a wife and a family. He had lost hope of seeing his mother through the end of her life. 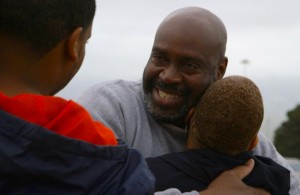 Worse yet, their criminal pasts will haunt them forever, because we won’t let them forget it. Both men have an incredibly hard time finding, and retaining work, despite being open to anything and having honed a wide variety of skills in prison. Bilal is faced with the catch 22 of risking his job, or going back to prison if he doesn’t ditch work to meet with his unwavering, unsympathetic parole officer. Meanwhile, Kenneth is plagued with painful flashbacks and the lifelong struggle that drug addiction ensures.

For some this is too little too late. 10,000 prisoners were sentenced following implementation of the Three Strikes law, with countless loved ones caught in the terrible wake of it. Since Prop 36, 2100 have been released, with only a 9% recidivism rate and a savings of $1.3 billion for California.

It seems insane to think that treating prisoners as sub-human will be an effective way to rehabilitate them and deter crime, yet that is the prevailing message the criminal justice system sends. Through their film, de la Vega and Galloway expose a system rigged against people of color, and those with mental health and addiction issues. Their emotional roller coaster of a film is hopeful but also shows how far we’ve yet to go.