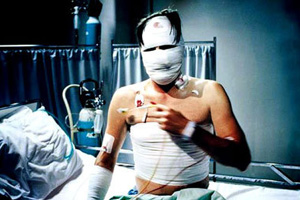 It’s hard for me to think of any other than recent movies to reflect on, so how about a film related experience that has stayed with me through the decade instead? Me and my permanent sweetie Diaz were at Cannes to support Gerardo (Naranjo) and his film Drama/Mex which was premiering there in, I think, 2006. We were at some main hotel one morning, around 10am, following Gerardo around when, as he was about to take off somewhere, he said in hushed urgent tone, “Look at the bar, Aki Kaurismäki is there!” He had to go on his way quickly, so it was up to Diaz and I to do something. It took us a bit to work up the courage to approach him, stealing glances, seeing that he was wavering a bit on his feet. But finally, like two eager puppies we went up and did our best to express what his work meant to us and thank him for it. It really felt like he was hearing us, and even though he was most likely drunk, or at least hungover, he stared deep into our eyes and looked from one of us to the other, giving us all his time and attention. When we were finished with our spiel, a long moment of silence passed—he still hadn’t said anything to us; we had just dived right into it. After the silence was just beginning to become uncomfortable for us to start fidgeting, Aki said, ” You’re both so young. (long pause) Enjoy it while it lasts.” I don’t know if we were looking for wise words—I think mostly we wanted to make contact with the hopes of showing him the film we made—but his words and they way he looked at us has stayed with me, carried me through some times when I needed them. — Azazel Jacobs (Momma’s Man, The GoodTimesKid)

No other movie of the last decade affected me more than Darren Aronofsky’s Requiem For A Dream. The viewing experience was so intense and depressing yet the visuals and soundtrack were so fresh, cool and dynamic. The film completely overwhelmed me. I still get the chills thinking about some of those scenes. I left the theater thinking I never wanted to sit through it again. Ten years later, I still have yet to re-watch it, though I realize this might be less about the difficulty of the film and more about not wanting to touch the powerful, visceral, immediacy of that first viewing experience. — Michael Jacobs (Audience of One)

Redland (2008), directed by Asiel Norton, is one of the most striking, original and hugely ambitious films made for under $1 million that I have seen in recent years. It is set during the Great Depression and deals with an illicit love affair and one family’s struggle to survive poverty. It is visually stunning with great use of natural light and composition. It harkens back to films like The Mirror by Andrei Tarkovsky and Days of Heaven by Terrence Malick. It challenges the viewer with its subtle use of allegory and ambiguity. It is a haunting film that I kept thinking about days after watching it. — Rodney Evans (Brother to Brother) 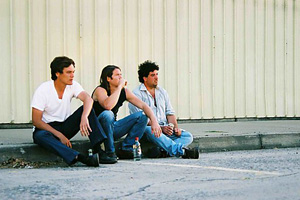 I’ve been keeping a diary of every film I’ve seen since December 27th, 2004. Here is my entry for Shotgun Stories, dated 2/1/09: Dear Jeff Nichols, Congratulations on this beautiful film you have made. I was very moved and inspired by what you did. I am a filmmaker myself and it renewed my deep love for cinema. I have 3 brothers myself and luckily I’ve yet to lose them but some day that time will come. As it comes to all families. People die. Families evolve. New members join and some leave. The final shot of the Hayes sitting on the porch was so poignant and telling. It said more than can be written. The human race is continuous and so are families and so is blood. Beautiful. I also will not look at cars again the same way. In your film, they herald arrivals, departures, decisions, deaths, mistakes, promises and more. Robert Bresson came to mind. The repetition and noise of each car sounded so individualistic and full. Characters. Yea! — Mike Brune (The Adventure, Blood Car)

My brother has this ridiculous rule. He never rents a movie under 90 minutes. He says he doesn’t trust that a film under 90 minutes could be worth watching. It makes no sense at all, especially when you consider that Noah Baumbach’s The Squid and The Whale is 81 minutes. It’s a movie so perfectly edited and paced that it makes me wish all films were this length. Perhaps my attention span has grown too short. Maybe it’s that most films are too bloated for their own good. Perhaps it’s that most filmmakers don’t understand the intent of the scenes they’re writing and/or directing. They just jump into a scene without any thought or preparation. Sure, a scene needs to move the story along, reveal character, and all that shit, but Baumbach’s scenes do so much more than that, in far less time. 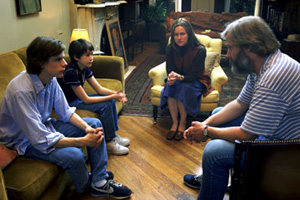 The film is about two brothers (Jesse Eisenberg and Owen Kline) dealing with the separation of their parents (Laura Linney and Jeff Daniels). At the beginning, we see the parents from the perspective of the brothers. They’re kept awake at night as their parents argue downstairs. The next day, the youngest brother (Kline) questions why the father is sleeping on the couch. The father tells his sons to come home after school for an important family discussion. We see the boys in school, lost in thought, reeling from the portent, imaging what the family discussion could be about. All the scenes come at us very quickly, giving us just the information we need to piece together what’s happening. There’s not a wasted beat or syllable. The film goes by rapidly, but never feels rushed, sort of like the pre-teen years.

The brothers’ worst fears are confirmed during the family discussion; the parents are separating, and the rest of the film chronicles this separation and how each family member copes. It is funny, honest, disturbing, and devastating. I do not know if Jeff Daniels was ever singled out for his performance but Goddamn it, he’s brilliant. And so is the rest of the cast and so is Baumbach and so is the editor, whoever that was, and the director of photography, whoever that was, and everyone associated with the Goddamned flick. I think it’s perfect.

I envy all those artists who are clever enough to take chunks of their lives and successfully adapt them into a song or story or film. A lot of us have been kept awake by our parents arguing in the other room. But most filmmakers would force us to hear that argument. They would let the argument play out in a melodramatic montage of close-ups and handheld medium shots. Baumbach instead focuses on the two brothers upstairs. What the parents are actually arguing about is an afterthought. This scene is not about whether or not the mother is having an affair. It’s about the torture of the children upstairs. Again, it was a brief scene. If you looked down at your cell-phone to see who sent you a text, you’d miss it. But the whole film plays like this and it sent me back twenty-five years. — Onur Tukel (Ding-a-ling-less)