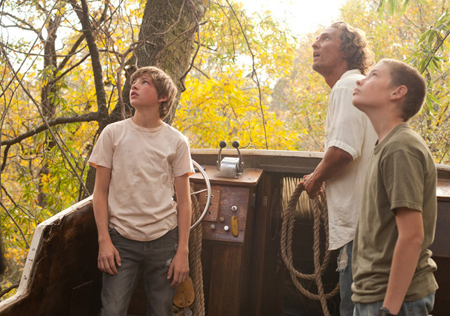 Mud (Lionsgate) — If Jeff Nichols keeps it up, he’ll be deserving of a Lifetime Achievement Oscar at 40 and will have nowhere to go but downhill. Slow down, son! For those critics who appeared to be underwhelmed by Mud when it world premiered in competition at the 2012 Cannes Film Festival, I hope I never eat one of the croissants you had for breakfast that morning. While Nichols takes an expansive approach in telling the story of two young boys who befriend an escaped convict (a totally awesome Matthew McConaughey) who dreams of reuniting with his true love (Reese Witherspoon), it’s obvious that Nichols is tapping into Southern literature as much as he is classic Hollywood cinema. For that reason alone, these 130 minutes are earned. Mud is old-fashioned entertainment at its finest, featuring startling cinematography by Adam Stone. Available on DVD 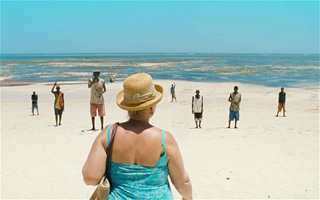 Paradise: Love (Strand Releasing) — On the one hand a fascinating examination of how an innocent’s simple desire to be loved turns to cynicism and lust for power, but Ulrich Seidl marinates it in a rich context of geopolitics, creating fascinating layers of exploitation and counter-exploitation, shining a harsh spotlight on Teresa’s self-delusion, and showing us how quickly a kind-hearted human being can turn into a monster. Read Paul Sbrizzi’s full HTN review. Available on DVD

To The Wonder (Magnolia) — Terrence Malick’s follow-up to The Tree of Life is smaller in production scope but not in ambition, as the reclusive director pushes his ethereal vision to the extreme, resulting in a cinematic ballet of sorts. On a first viewing, I confess that I admired To The Wonder more than I felt it. Contrary to those who think Malick has gone off the deep end here, I actually think this is an expression he’s been building towards all along. Available on DVD

Magic Magic (Sony) — The perhaps less publicized of two features directed by Sebastían Silva and starring Michael Cera in 2013, Magic Magic features another outrageous-yet-somehow-still-grounded performance from Cera (who confessed to biting Rivers Edge-era Crispin Glover at the Sundance world premiere’s post-film Q&A), as well as another strong female characterization. Juno Temple plays an out-of-her element foreigner in Chile who might be under possession by some ghostly forces, or who might instead simply be losing her mind. In contrast to the improvisational, low-budget, ultra-scrappy vibe of Crystal Fairy, Magic Magic has a controlled formalism—cinematography by Christopher Doyle and Glenn Kaplan—that firmly places it in the psychological horror shelf in the video store. Available on DVD

The Earrings of Madame De… (Criterion) — Available on DVD

The Thick of It: Seasons 1-4 (BBC Home Entertainment) — Available on DVD

The Place Beyond the Pines (Universal) — Available on DVD

On The Road (MPI Home Video) — Available on DVD

The World Before Her (Docurama) — Available on DVD

The Story of Luke (Gravitas Ventures) — Available on DVD