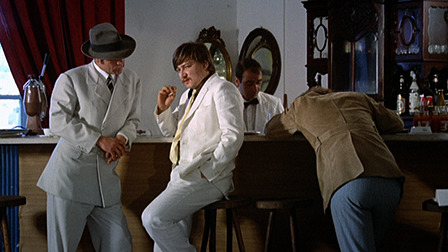 Eclipse Series 39: Early Fassbinder (Criterion) — Werner Rainer Fassbinder arrived onto the filmmaking scene in 1969 straight from the theater, using the tropes of the French New Wave to carve narratives of Brechtian alienation onto the big screen. His prolific dedication to working with his company of collaborators, learning his craft and forging his own artistic identity is highlighted in Criterion’s Eclipse Series Early Fassbinder, a five-film box set of films from Fassbinder’s formative years. Purposefully bereft of Criterion’s usual bonus features, the Eclipse box allows the films not only to speak for themselves, but collectively in this case, as a sort of artistic growth chart. Spanning only two years (!), the box includes five (!!) of Fassbinder’s first seven films made between 1969 and 1971 (!!!). From the Kafkan French New Wave homage of his debut Love Is Colder Than Death (1969) to the casually devastating portrait of German bourgeoise xenophobia in Katzelmacher (1969) to the portrait of a criminal seeking reintegration into an unforgiving society in Gods of the Plague (1969) and Fassbinder’s wonderfully perverse, theatrical film noir The American Soldier, this collection finds the young filmmaker experimenting with the line between the stage and the screen, his distinctive sense of mise en scène flowering with each passing project. But there is a huge leap in style and purpose with 1970’s Beware Of A Holy Whore, finished two films after The American Soldier; the story of a film crew struggling to organize itself amidst the economic and creative degradation of the production process, the film is a scintillating transition from Fassbinder’s earlier films into the language and invention of the modern cinema includes Love Is Colder Than Death, Katzelmacher, Gods of the Plague, The American Soldier, and Beware of a Holy Whore. Available on DVD

To Be Or Not To Be (Criterion) — Available on DVD

At Any Price (Sony Classics) — Available on Blu-ray

Iceberg Slim: Portrait of a Pimp (Phase 4) — Available on DVD