(Benjamin Dickinson’s latest feature Creative Control is a clever look at the way consumer’s digest new technology without ever questioning the consequences or intent behind their consumption. It wowed audiences at the 2015 SXSW Film Festival including our own Mike S. Ryan)

I always enjoy films at SXSW that take on technology as a theme or subtext. Physically at the festival we are forced to share space with the ‘interactive’ people in attendance which fills the air with the endless blather of Mad Men like corporate techies droning on about the latest ‘innovation’ to help us consume faster. Stepping into the darkened hush of a theater to see a film that wrestles with the pro-consumption intent of all technology while wrestling with our own tendencies to hide from the pain of ambiguous analogue reality through these devices is always a welcome relief.

Creative Control is directed, co-written and stars Benjamin Dickinson. Also co-written by Micah Bloomberg the film is an Antonioni (circa La Notte) inspired satire exploring the monied, tech infatuated, hipster youth of Williamsburg. As in the case of the bored, privileged educated urban sophisticated who were the subjects of the Antonioni films, here the well groomed and smartly attired youth are subsumed under soulless technology and ‘hip creative’ jobs that don’t really give them the outlets they crave. Dissatisfaction in the work place and at home manifests itself in excessive drinking and rote sexual escapades. The more things change, the more they stay the same. Though the setting of the frustrated creative ad-man places it squarely in the company of such genre greats as Bliss (1985), Putney Swope (1967), How to Get Ahead in Advertising (1989), Lost in America (1985), Will Success Spoil Rock Hudson (1957) and I’ll Never Forget What’s His Name (1967), the film is in some ways better than those satires in its astute portrait of modern young romance and what makes a man stray.

At the core of the film is the lead character David’s futile search for meaning through a job that could care less about his dreams and desires. Played by Dickinson, David ‘s struggle is visually rendered and developed through a series of razor sharp penned set-pieces that place him in the vortex of personal and technological demands that challenge his sense of self and manhood. The black and white photography, the alienating architecture dramatized through Antonioni like compositions, the swank but cold set dressing, all serve to convey the characters solitude and alienation as he stumbles through his “crisis of conscious.” 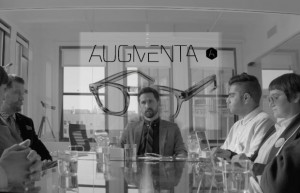 David is a creative executive at an agency who gets a new account for a cutting edge product that utilizes artificial intelligence/reality in a Google glasses type device. Its called Augmenta and it is literally designed to augment reality. The creator of the product wants a groundbreaking campaign that ignites the imagination of the consumer who may not yet fully understand the devices potential to change the world. David tells his creative team that he thinks the product is “less Main Street than it is Bedford Ave.” In an attempt to find a truly significant purpose for the glasses they hire ‘think outside of the box’ visual guru Reggie Watts (playing himself) who unleashes his hippie cosmic holistic mojo and gets to work on finding a earth shattering purpose for the new device. Meanwhile David is getting more and more infatuated with his best friends girlfriend, Sophie, played by the always winsome Alexia Rasmussen. As David’s own life starts to spiral downward, due in part with his boredom with his own wife and safe home, he uses the glasses to capture Sophie’s image and then have his way with her within its artificial reality space. As things reach a boiling point in David’s personal life, the campaign implodes as Reggie fails to deliver a campaign that is any way applicable or compelling to potential consumers.

Throughout the film there are many brilliant scenes in which technology is shown to distract us from being fully present in the moment. One scene in particular shows David managing three simultaneous conversations on three different devices. While I think we’ve all been there before what’s so brilliant here is how this insanity is dramatically conveyed using visuals. The film uses special effects in a manner that always is in service to story and character, all the more amazing considering that this is a low budget, true indie film. 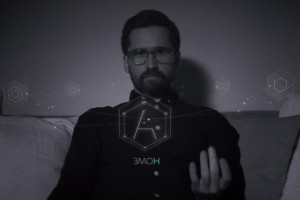 Creative Control is compelling on so many levels, not just in its portrait of modern romance and relationships but also in its portrait of the role technology plays in our daily lives. Where it let me down was in its use of Reggie Watts as the potential genius whose job was to find a non-exploitive yet commercial purpose for the device. In the SXSW Q & A director Dickenson said that he thought technology was neutral, meaning it’s not created with a purpose, it’s a device that we use as we see fit. I couldn’t disagree with this naïve belief more and the flaw in this logic is manifest in the straw dog set up of the impotent character played by Reggie Watts.

I kept thinking about what would have happened if rather than the spew of Watts instead Jaron Lanier (author of You Are Not a Gadget) or Ted Nelson was given the campaign. I think then we would have seen a device whose purpose was to empower the user and the image subject. But, as in all Apple devices, the creator of the device really had a different idea about who in the end needed to most benefit from the devices employment. It’s not really created in a neutral space, it’s designed to serve the commercial demands of the creator and in that way, it’s designed with the intent to exploit the consumer. The question regarding the search for devices which truly do improve the quality of life, outside of selling products, still stands.

But despite this issue, the film’s inability to solve this technological question does not distract from the compelling cinematic rendering of one of the most important dilemmas of our current time period: Man versus Technology, Science versus The Soul. These are classic conflicts that have driven some great films, starting at least with Kubrick’s 2001: A Space Odyssey (1968) stretching through the recent Her (2013) and Computer Chess (2013). Thank goodness we are still admitting there is a problem and there needs to be an an alternative existence that is not managed and controlled by the corporate consumer prerogative.