(The Deer Hunter won five Academy Awards, including Best Picture, Director, and Supporting Actor [Christopher Walken]. New Beverly Cinema in Los Angeles is playing it from April 10-12, 2011. For everyone else, you can buy it on DVD

or rent it at Netflix.)

Certainly the most personal of the Vietnam movies, The Deer Hunter is in my view also the best. Intimate where others are bombastic, Michael Cimino’s 1978 film is seemingly set on a small scale, but its scope is vast. The simplicity of its premise—three mill workers from the steel town of Clairton, Pennsylvania enlist in the army, thus serving their country in an even more thankless fashion than they already do—may at first obscure this fact, but it ultimately allows Cimino’s chief concerns (the lottery-like randomness of wartime suffering, post-traumatic stress disorder, the deterioration of once-close relationships) to come to the fore. By and large, these concerns do not include warfare itself: A mere ten minutes of The Deer Hunter‘s three-hour runtime depict actual combat. Cimino isn’t interested in Vietnam itself but rather the ways in which it irrevocably alters the lives of his characters.

A few battle-oriented scenes are all it takes for Cimino to make this clear. Vietnam looms as such an ominous, world-shattering presence in the hour or so that precedes The Deer Hunter‘s geographical (if not tonal) shift that the fighting itself is something of an afterthought. We’ve seen so much of Michael, Nick, and Steve’s relationships with not only each other but the rest of their friends at home that, upon their arrival in Vietnam, the extent to which they’re out of their depth, element, and place is immediately and pressingly clear. These are men who likely know little of the conflict in which they’re involved and even less of the people they’re fighting; what stakes they actually have in the war are negligible to the point of absurdity. Their true battles thus lie not with the Vietcong, but their own psyches: Steve has to cope with a life-changing injury, Nick is so traumatized by a forced game of Russian Roulette that he stays in Saigon in order to satiate what can only be described as a PTSD-induced addiction to the game, and Michael has to somehow keep them all together. In spending so much time depicting things as they are—and, one can reasonably assume, how they ought to remain—Cimino increases the effect of their turn for the worse by untold amounts: A community as closely-knit as theirs is the type to never fully recover from the loss of even one of its own. The Deer Hunter depicts the effects of Vietnam in microcosm and allows viewers to draw the link between these few characters and the tens of thousands of other Americans (to say nothing of the countless Vietnamese and others) who suffered similar or worse fates of their own. 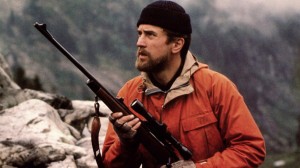 This is achieved not only by the prominent wedding sequence but, just as effectively, by two moments of incidental music which softly, achingly communicate the film’s underlying woe. The first, a spontaneous solo piano piece, immediately precedes the men’s deployment to Vietnam; the second, which is just as unannounced, is a communal a cappella rendition of “God Bless America” that was initially controversial for its presumed unpatriotic overtones but which now seems utterly heartfelt in its own way. Both are dirges to the way things have been, a way they’ll never be again.

Robert De Niro, as the title character, is ostensibly the film’s protagonist, but The Deer Hunter has always seemed to to be Christopher Walken’s film. This isn’t from a lack of competition–De Niro and Walken are joined by John Cazale, Meryl Streep, and John Savage in a formidable ensemble cast–but rather his embodiment of lost innocence. Nick is far and away the most tragic character in the film, but even his descent pales in comparison to the real-life tragedy of John Cazale. Terminally ill at the time of filming, Cazale’s scenes had to be shot first so that he could finish them before his untimely death. Enough has (deservedly) been written of Cazale to obviate anything I might add, but suffice to say that his small role is rife with such urgency that The Deer Hunter may well have been an altogether different film had he not been in it.

Cimino’s use of, and fixation on, Russian Roulette as both a plot device and metaphor for the war as a whole may be read in a few different ways. It does, of course, point to the arbitrary and seemingly purposeless violence of Vietnam. A more literal interpretation–pointing out the fact that, of the six Russian-American men who comprise the film’s core friendship, one is killed–is also useful insofar as it underscores the importance of one of The Deer Hunter‘s most vital lines. “One shot,” Nick says twice in the film, first of hunting deer and then, in a nearly catatonic daze, moments before the film’s climax. (Six chambers, six friends; one bullet, one death.) Despite the weight it carries, this astute metaphor somehow seems lacking: A single pull of the trigger in Russian Roulette carries a one-in-six chance of death. These stakes, high as they are, seem woefully insufficient in conveying The Deer Hunter‘s permeating sense of loss.