Is the world really about to end, or does it just really, really seem like it? While the movies have always been fascinated with this disturbing proposition, recent years have pummeled us with visions of an imminent apocalypse (Take Shelter, The Road, Melancholia, 4:44 Last Night on Earth, The Turin Horse, just to name a few). For my money, the scariest one of them all is Chris Smith’s Collapse, in which investigative journalist Michael Ruppert monologued his way into my nightmares for months. Now comes Mathieu Roy and Harold Crooks’s Surviving Progress, another nonfiction semi-horror film about how humanity’s desire for progress is ironically what might very well be the reason for its destruction. While Surviving Progress is sobering and at times quite frightening, thanks to the onslaught of convincingly rational interviewees on display, it’s also clear that the filmmakers haven’t set out to deliver a straight shot of hopelessness. If anything, their film is a warning cry that will hopefully shake viewers into considering our behavior while we have some behavior left to consider. 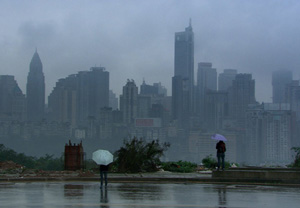 Though they’ve based Surviving Progress on the 2004 best-selling book A Short History of Progress by Ronald Wright, Roy and Crooks have wisely strayed from that text in order to make necessary updates that enable their film to keep up with the rapidly shifting times. Still, Wright appears throughout alongside many other intellectuals to comment on a variety of ideas, and the film’s overriding thesis—the concept of “progress traps”—is taken directly from his book. “Progress traps” consist of advanced technologies that seemingly enrich our present-day lives while endangering our long-term existences. Herein exists the double-edged sword that has made our 21st century world so precarious. The obvious inherent problem is that what is good for the wealthiest, most powerful individuals, tends to be the worst for everything else—and not just the poor; we’re talking about the earth itself here.

One question I now immediately ask myself when encountering a documentary that was based on an article or a book is if it even needed to be transposed from the page to the screen in the first place. In the case of Surviving Progress, that answer is a resounding yes. Though Roy and Crooks stuff their film with an overabundance of information, it never becomes too daunting or overwhelming. That’s because this isn’t a straight shot of talking head cinema. While there is a constant barrage of interviews—subjects include Margaret Atwood (author), Jane Goodall (primatologist), Stephen Hawking (theoretical physicist), Michael Hudson (economic historian), Kambale Musavuli (Friends of the Congo), Vaclav Smil (global energy expert), and many more—the filmmakers also travel across the globe to introduce us to everyday people whose lives are directly impacted by global industrialization (a tour guide in China, a sawmill owner in Brazil). Gorgeous cinematography transports us to these far-flung places, and our being there enables us to see and feel the layers upon layers of conflicting interests that make this subject so incredibly complex.

There is a certain type of individual who doesn’t like to encounter any situation in which there is no easy solution, in which it’s impossible to take a black-and-white, cut-and-dry stance. But when it comes to life as we live it right now, the only guarantee is that there is no black-and-white, there is no cut-and-dry. Surviving Progress is unflinching and thorough in its presentation of this less-than-promising information, yet the filmmakers end on a relatively hopeful note, assuring us that as long as we confront these issues head on with thoughtfulness, care, determination, and love, we will find a solution. We’ve done it before.