Fb. In. Tw. Be.
Best of
Documentary
On DVD

(Collapse world-premiered at the 2009 Toronto International Film Festival. In order to capitalize on its very positive word-of-mouth coming out of Toronto, Cinetic FilmBuff is releasing it theatrically on November 6, 2009, as well as OnDemand beginning November 15th. It can now be found on Time Warner, Comcast, Cox, Verizon FIOS, Charter, and more. Visit the film’s official website for more details.)

Call me gullible, call me a sissy, call me uninformed, call me whatever you want. There’s no denying it: Chris Smith’s Collapse scared the living piss out of me. Smith channels his inner Errol Morris with this unnerving one-man-rant by former LAPD officer turned investigative journalist Michael C. Ruppert, who has been dismissed by many as a crackpot doomsayer, but whose rigorously fact-checked mind and stirring arguments are compelling, convincing, disturbing, and rousing. Collapse might very well be the first feature-length documentary monologue that is better suited for the horror section.

Who is this Michael Ruppert guy anyway? Born into a family with CIA connections, Ruppert began his career in the Los Angeles Police Department, where he was a narcotics investigator. But after encountering rampant corruption in the LAPD, he spoke up, and he spoke up loudly. Shunned by his fellow officers, as well as his friends and family, Ruppert became even more determined to expose his government’s hypocritical role in the drug trade. Over the years, his mission continued to evolve—voiced in his newsletter From the Wilderness—and when 9/11 struck, he mastered the ability to sift through mainstream media and make connections that nobody else was making. In 2006, he predicted the stock market’s impending collapse, which, in hindsight, makes him look more psychic than journalist. 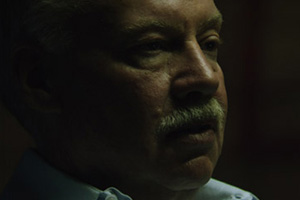 That particular flash of prescience is just one of the many reasons it’s so difficult to dismiss Ruppert, and it’s why his current obsession, the one that drives Collapse, is so utterly terrifying. Peak oil is a term that was invented in the mid-20th century by Marion King Hubbert to describe the moment when our world has reached a maximum point of incline with regards to petroleum extraction. Yet our society relies on oil to a crippling extent. When that supply begins to decrease, our demand will only continue to increase. To Ruppert, this is as unwavering a truth as the cycle of birth, life, and death. There simply isn’t enough oil to sustain our world’s rampant industrial growth.

So what happens when all of that oil is depleted, or becomes too expensive to purchase? Lock your doors, kids, ‘cause it ain’t pretty. Life as we know it is going to completely shut down. As Ruppert furiously envisions the chain of events that will lead to a cataclysmic disaster the likes of which our planet has never seen, Smith incorporates newsreel footage—fueled by Barry Poltermann’s sharp editing and Didier Leplae and Joe Wong’s menacing score—to further ratchet up the sense of impending doom. Ruppert goes on to explain that every alternative is a bust. Electric cars? Seven gallons of oil are used to make a single tire. Clean coal? There’s no such thing. Ethanol? Ha!

So what are we supposed to do if we’re on a one-way tumble to catastrophe? Why even bother? Here is where Ruppert—and Smith—give us a flicker of hope. As convinced as he is that we’re in irrevocable trouble, Ruppert is also a firm believer in the power of the human brain and human spirit to find a solution. His suggestion? Become localized. Build a garden. But most importantly, don’t panic.

It’s funny to be spun into Ruppert’s verbal tornado, driven into a state of near panic, only to then be told by the guy who’s doing the spinning and driving to just relax and calm down. Which is what makes Collapse so fascinating, for as frightening as it is, it’s also laugh-out-loud funny. Ruppert might be an isolated, bitter, and angry man, but he also has an acerbic, oddly charming sense of humor, which makes for quite a startling combination. Any time you want to dismiss this guy, he dismisses you right back and you’re left with no choice but to listen. The most memorable quote that just about everyone has latched on to: “I don’t deal in conspiracy theory. I deal in conspiracy fact.”

Smith’s voice is heard throughout the film, in the darkened background of the makeshift interrogation warehouse where this interview was filmed, and he plays devil’s advocate by speaking for the most skeptical viewer. But it’s clear that his mission with Collapse was not to prosecute or defend Michael Ruppert. He is more interested in Ruppert the man, an otherwise seemingly ordinary American who, by taking this firm stance, has isolated himself, and been isolated, from society. That we have previously watched him express himself with such intellectual precision, with such emotional passion, only adds to the film’s timbre of sorrow. Let’s hope he’s wrong about this one.