STARRED UP
A Complicated Inheritance

(Starred Up world premiered at the 2013 Telluride Film Festival and was picked up for distribution by Tribeca Film. It’s available on VOD (Amazon Instant

, iTunes) on August 26, 2014 and opens theatrically on August 27th at the IFC Center. Visit the film’s official website to learn more.)

To categorize Scottish director David MacKenzie’s Starred Up as a prison drama is the most basic way to describe the film. Though the story, about a juvenile offender who is ‘starred up,’ or transferred early to adult prison, falls within the genre, MacKenzie subverts expectations in surprising ways. The film follows 19-year-old Eric Love (Jack O’Connell) as he’s transferred into prison, where he struggles to fend off a punitive warden and cope with the presence of his estranged father Neville (Ben Mendelsohn), a longtime prisoner who is fully entrenched in its hierarchy. A sympathetic therapist Oliver (Rupert Friend) tries to buffer Eric’s descent by replacing punishment with group therapy, with polarizing results. What sets MacKenzie’s film apart is his willingness to trade some of the shock and awe of prison narratives for character development. Exceptional performances and a nuanced screenplay allow the film to explore broader themes of fatherhood and masculinity without tipping into sentimentality. On the other hand, though the scenes of violence are sudden and vicious, the film doesn’t linger on them any longer than the story requires, and it more or less skirts the issue of rape. As much as might be possible in the hostile circumstances, the story ends on a razor-thin feeling of hope.

Screw Hollywood metrics, Ben Mendelsohn is my Tom Cruise, the actor I will go see in any movie he’s in. He’s a chameleon of darkness, one of the few actors who can play a dead-eyed psychopath and still have my sympathy. He is typically impressive in Starred Up, but the rest of MacKenzie’s cast are exceptional too. They more than hold their own against the chameleon, especially young lead O’Connell. From the opening sequence the film aligns us with Eric; he’s smart and resourceful but also a tough bastard, an impulsive aggressor who at the outset nearly beats a man to death because his hair-trigger instincts mistake an act of kindness for an attack. As another prisoner puts it, “Starred up means you’re a leader.” Harsh circumstances breed this kind of ‘leadership,’ and Eric has learned how to distill emotion into an almost lethal drive for self-defense. The question is whether this will save his life or end it. 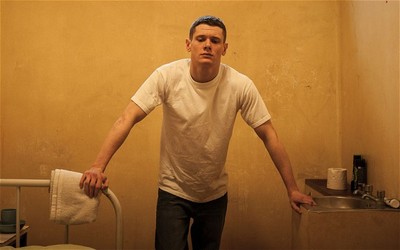 One of the story’s stronger choices is to reveal information on Eric slowly and deliberately, including the introduction of Neville, though the first father figure to step in and help Eric is Oliver. All we really need to know about Oliver is that he’s a volunteer psychotherapist at the prison who facilitates an anger management group. The film isn’t very interested in why Oliver is there, and neither was I. Still, these group sessions are fresh and funny, some of the best scenes in the film (the screenwriter Jonathan Asser worked as a therapist in a London prison for years, and he has a good ear for the humor and pathos of the mens’ banter). Assigned to the group in place of solitary confinement, Eric finds his first few ‘friends,’ Hassan (Anthony Welsh) and Tyrone (David Ajala), who start to look out for him. This aggravates Neville, who intrudes on his son’s therapy. It could be jealousy, but he has also promised his ‘boss’ to neutralize Eric’s outbursts by whatever means necessary. All Neville seems to know how to do is threaten or patronize Eric, peevishly tossing a bag of contraband snacks at his son as if he’s still a child. Neville is a negligent father, petulant and cruel, but Mendelsohn and O’Connell lock into the uneasy primal bond of father and son, and the inevitable confrontation plays out much differently than expected.

Though A Prophet and Scum would be obvious references, MacKenzie cites Robert Bresson’s A Man Escaped and Don Siegel’s Escape From Alcatraz as two of his influences. The first thing I noticed about Starred Up was the strength of the compositions. Working with director of photography Michael McDonough (Winter’s Bone), MacKenzie tells the story with elegant, emotionally coherent images. Less frenetic, choppy handheld than fluid Steadicam, the camerawork serves the pacing set by the screenplay, and is far more elegant than it needs to be. Which is a good thing, because even with the provided list of UK prison slang the thick accents can be hard to understand at times. MacKenzie uses his location very well, caging the prisoners in the frame, and building an ambient score from the echoing metal and concrete. The film was shot in sequence and two editors were also cutting on set, which seems to be a smart and intuitive way to work, especially for a story like this. Not that everyone was pleased with the process—according to Ben Mendelsohn it was “fucking horrible. Horrible. One of the shittiest fucking shoots I’ve ever been on. It was very rushed. They were trying to shoot a lot in a short time. We were in a prison, it was freezing.” Fair enough. But apparently he doesn’t watch his own films. If he did, in the case of Starred Up I’d like to think even the chameleon would be satisfied.