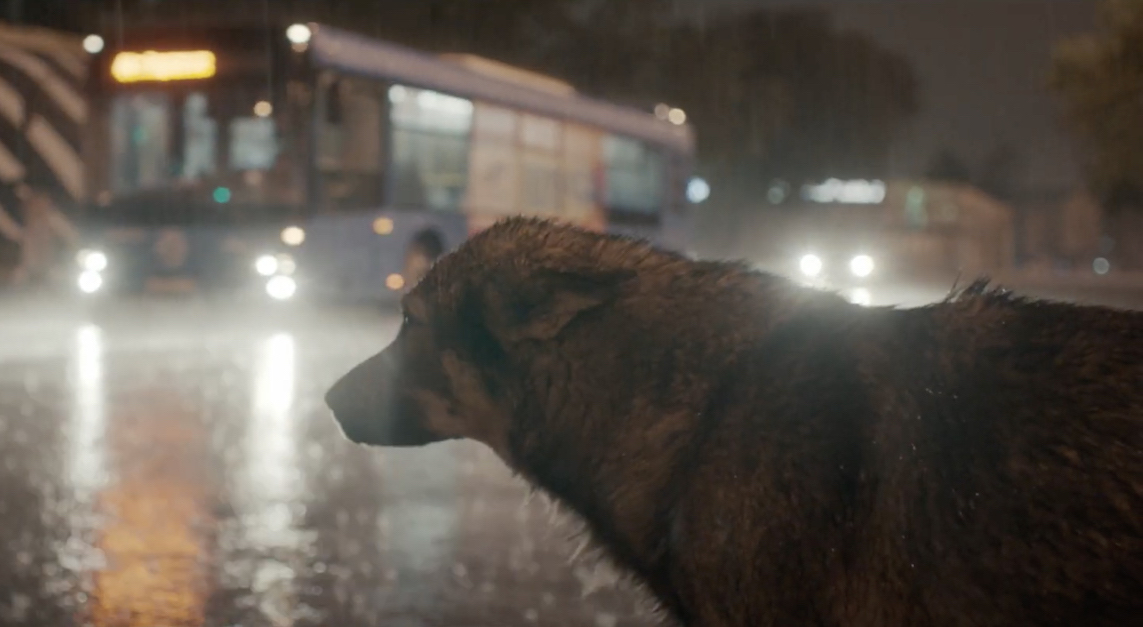 (Elsa Kremser and Levin Peter’s Space Dogs is available now on VOD via Icarus Films. Like what you see here on Hammer to Nail? Why not give just $1.00 per month via Patreon to help keep us going?)

A simultaneously lyrical and stark portrait of stray canines in the Russian capital of Moscow, the new documentary Space Dogs places its modern-day material in the larger context of human experimentation on their animal cousins (chimpanzees and turtles, included). In particular, directors Elsa Kremser and Levin Peter (Beyond the Snowstorm) focus on the often heartless way we used dogs (and chimps, and turtles) as our surrogates in the early days of space travel, sending them in our place to verify the viability of equipment. Narrated, in Russian, by actor Aleksey Serebryakov (Leviathan), whose sometimes ironic commentary underscores the harsh realities of scientific innovation, the film cuts back and forth between the present narrative of a few especially savvy dogs and their possibly distant cousins in the past, who journeyed beyond the confines of our planet. Life contains the unexpected, no matter who, where or what species you are, so make the most of it. Be true to your nature.

Indeed, these dogs are so true to who they are that the movie includes a distinctly unpleasant sequence where our two main protagonists kill a cat on camera (viewer discretion is most definitely advised), and it’s unclear whether they ever actually eat the poor thing, afterwards, or simply play with the corpse. The camera remains unflinching, throughout, be it closely following the four-footed subjects or highlighting the surgical preparations on their cosmonaut forebears. And lest we think this is only about Russian/Soviet cruelty, Serebryakov reminds us of how “Number 65” – the first (American) chimpanzee in space – suffered following his own ordeal. The filmmakers also include some footage of performing monkeys today, as well as turtles (the Soviet sent two turtles to the moon, way back when), to remind us that the vagaries of existence apply to all.

There are many similarities in style to last year’s Chilean masterpiece Los Reyes, which also explored the precarious wanderings of two homeless mongrels (though they avoided killing hapless felines, at least as far as we know), with a dash of Werner Herzog’s Grizzly Man (“the overwhelming indifference of nature” kind of thing) thrown in for good measure. There’s also plenty more to make it its own unique work, the musical score – both diegetic and non – gently accompanying the harsh metaphysics of the affair. Mixed in with the archival shots of dispiriting treatment of 1950s dogs are also sweet scenes of humans, then and now, caressing their charges. We are not all bad, at least not all the time.

As difficult to watch as it may be, Space Dogs remains visually and aurally beautiful for its entire 90-minute length, from the recreated re-entry fire that consumed Laika, the very first “space dog,” to the poetic stillness of a city’s streets at night. Our planet is complicated, as are we, as are all lifeforms. Embrace that complexity, both here and beyond our borders.