(Zach Ward’s Restoration takes the standard “new-tenants-move-into-a-haunted house” idea and adds some clever twists. The film drops on VOD and iTunes this week and is well worth a peek.)

Horror fans (myself included) know that it’s tough to keep the water in the well fresh. We tend to be very forgiving about this, however, because our love for the genre is pure. Zach Ward’s feature directing debut, Restoration, is built with a familiar framework. A young couple buys a house, which turns out to be haunted by the ghost of a little girl who perished under mysterious circumstances. But Ward is clearly studied. He understands, and utilizes, that winning formula. And then he makes it his own by adding a few twists and turns and spending some time on character development, so that you really feel for the protagonists by the time you reach the heart-pounding third act.

Becca (Emily O’Brien) and Todd (Adrian Gaeta) have just moved to town for Becca’s residency at the local hospital. Something our presidential candidates have failed to address during their campaigns is the fact that lower-income people are always stuck buying the haunted fixer-uppers. Fortunately, Todd is handy, so he takes it upon himself to make the place livable while Becca goes off to work the most stressful job in the universe, dealing with trauma patients. One day, Todd finds the world’s creepiest teddy bear hidden inside one of the walls, and hidden inside that is the 30-year-old diary once belonging to a little girl named Katie.

Katie was a happy-go-lucky 11-year-old until she started consorting with the neighbors, a newly adopted brother and sister, who draw her into an “investigation” of the nefarious secrets lurking in their basement. Katie also mentioned the disappearance of several local children and feared for her own safety. The diary ends abruptly, following a particularly panic-stricken entry. Becca is plagued by nightmares featuring Katie, but soon realizes they are more than just the diary’s influence. Katie is sending her a message from beyond the grave. But is it a threat, or a warning? 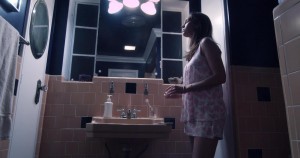 Zach Ward is primarily an actor by trade, best known (to me, at least), as the ginger bully from A Christmas Story. In addition to directing and co-writing the script (with James Cullen Bressack), he plays Harold, one half of an overbearing neighbor couple. Harold collects antiques and has a lot of questions for Becca and Todd. His other half is Francine (Sarah Ann Shultz), a cookie-bearing frenemy who loves to give unsolicited backrubs.

Weird neighbors, cryptic diaries, and frequent trips to the fuse box might not mean anything in the real world, but this is a horror movie, so of course it’s all leading up to something. But believe me when I say it’s not what you think. There are several elements that telegraph the existence of the twist, but there is little chance you will guess the exact nature of it.

And that’s not all that sets the film apart. The script offers more layers than the typical ghost story. We get to know Becca and Todd very well through their daily interactions and squabbles. Some short, well-executed scenes speak volumes about who these people are and what they’ve been through.

The film is composed beautifully, with a couple of especially memorable static, shots that encapsulate the terror of investigating unexplained noises in your house or searching for that all-important file in a dark stock room.

I take issue, however, with a pregnancy subplot, not only because Becca’s concealment of it seems out of character, but also because just once I’d love for a woman to throw up in a movie and not follow it up with peeing on a stick. There is also a jump-scare that seems out of place in contrast to the slow-burning terror that Ward otherwise employs. The rest of the film is so well executed that these minor issues stand out more than they would in another genre film. Restoration is well worth a viewing for horror fans.