Imagine it’s the end of a long week and you’re lying in bed with your loved one, relaxing and watching TV. Your kids sleep soundly down the hall and you begin to nod off as well. Suddenly, your youngest daughter comes into the room saying something is outside her window. Just as you’re about to tell her she’s dreaming and everything’s o.k., you hear a loud thump on the front door. Scared, you grab a golf club and slowly sneak down the hall to see just what the hell is going on. All of a sudden there’s more banging on the door and you scream “who is it!?” No answer. Slowly you reach out to grab the doorknob, not knowing who or what awaits on the other side. You open the door to find 4 police officers pointing firearms at you and they drag you out of your own home and place you in handcuffs. They won’t tell you why they’re there or what it is they think you’ve done.

While that might sound like the cold open to a murder/mystery movie, it’s actually what happens all the time in modern America. It’s also a main component in Peace Officer, a crucial documentary that examines the increased militarization of local police in the United States. Local law enforcement officials currently have unprecedented rights to use force and their vehicles and attire are becoming more and more like the military (black or camouflage) which makes it difficult to realize they are in fact police officers. They are also acquiring military vehicles at an alarming rate that perpetuate fear and standoffishness in their communities. Peace Officer is an incredible documentary that seeks to not only question all of these trends but better, tries to affect a positive change rather than dwell on the painful and scary issues involved.

The debate over the use of force by police has become so commonplace lately that it’s sadly almost played out. Both sides of the argument (in basic terms: police should stop shooting people as a first solution –vs- if you weren’t doing suspicious activities, you wouldn’t get shot by police) seem to have reached a stalemate as neither side is willing to be empathetic towards the other. I’ve personally made the mistake of trying to talk sense to lifelong friends on Facebook who always back the police and it inevitably turns into me realizing they’re racist at worst, closed-minded at best, and that’s the end of that. But Peace Officer somehow manages to almost completely and totally eschew the race issue when it comes to the overly excessive use of force by modern day police officers. In fact, in many ways it turns a mirror to across the board defenders of police brutality as it mostly focuses on white people who are also pro-second Amendment. It just so happens these are some of the people who have been victimized by police officers choosing deadly force when it was not needed. Thus Peace Officer could honestly be the way we as a country start looking at, talking about and hopefully stopping the excessive use of force by police which, while still a serious issue when it comes to people of color being killed, is really a nationwide issue as well. Peace Officer can be the source of conversation and change, it’s that well done and vital as a film. 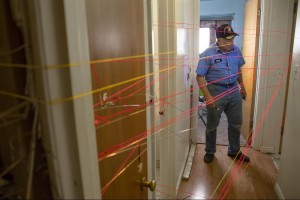 First time feature documentarians Scott Christopherson and Brad Barber focus a majority of their attention on former County Sherriff William “Dub” Lawrence. He’s retired from active police duty and might very possibly be one of the nicest, most caring people one could ever meet. While extremely proud of his time in the Marines and his many years of public service in law enforcement, Lawrence is also haunted by the death of his beloved son-in-law at the hands of the SWAT Team which in a sad, ironic twist, he was instrumental in bringing to his home state of Utah. He now spends his down time trying to collect evidence at crime scenes where a police standoff has ended with death or bodily harm to a citizen. Lawrence, who resembles a less angry Senator John McCain, is the ideal character to lead Peace Officer and moreover, the discussion of over-aggressive police tactics and the militarization of our police forces not only because of his background as an officer of the law but also because he takes the race issue out of it. Now, hold on. That’s not to say race isn’t a huge issue when it comes to overly aggressive uses of force by police but race and racism is also a bigger and deeper issue than that of police violence. I may be overly hopeful but I’d like to think if we could all come at the issue of police violence towards anyone and solve it, we’d all be better served as a nation. O.K., stepping off my soapbox now.

Peace Officer does a great job mixing in the history of SWAT and the militarization of local law enforcement as well as showing sad, human stories of the victims of police violence. Essentially, SWAT Teams were formed after the race riots in Watts (ah, race issues again) but were then put to use fighting in Nixon and Reagans war on drugs which also introduced some pretty sketchy forced entry allowances as well. While that fight continues to be a losing one, SWAT as well as military vehicles and tactics are now commonplace in America any time there’s a standoff, drug bust or peaceful protest. The film examines these tactics in a calm and sensible way and also relies heavily on its title (“Peace Officer”) to question what we are asking police to do. Is it keep the peace, as Dub Lawrence always tried to do, or is it to storm into a situation, guns and tear gas blazing, to try and save lives? 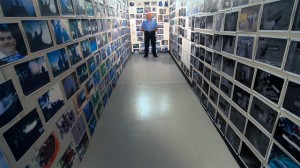 While the film tries to be even handed by giving police officers who’ve been involved in extremely harrowing situations that resulted in the loss of fellow officers time to eloquently speak about their experiences, one cannot walk away from Peace Officer without feeling an obligation to try and make law enforcement change the way they operate. No one should want anyone to be shot and killed be it a potential criminal or a police officer. And again, Dub Lawrence is a man working tirelessly to do the right thing by seeking justice and working for change. Peace Officer is a real eye-opener and I found it to be a refreshingly calm and sensible look at a serious issue that won’t really enrage both sides as they discuss it. While there’s nothing wrong with a smart and spirited debate it feels as though solutions are needed now rather than empty back and forth that escalates to anger. Peace Officer seeks to be that guiding hand towards positive change.