(Lourdes is now available on DVD

through Palisades Tartan. It opened theatrically in March, 2011, at the Film Forum. Go here to watch a trailer and find out about upcoming screenings.)

Lourdes opens with an elevated view of a handful of waitresses putting the final touches on a stately, not-quite-grand dining room. White tabletops, small green plants, and dark marble flooring comprise the scene. After a minute or so, the first guests begin to arrive—and nearly all of them are in wheelchairs or otherwise disabled. As Schubert’s “Ave Maria” begins to swell, these pilgrims to the holy city of the title are joined by their red-coated guides and helpers. At once ethereal and crushingly earthbound, Jessica Hausner’s film of divine uncertainty centers around Christine, a paraplegic woman on the fence between the pious and the nonbelievers whose entrance into the room almost passes by unnoticed. Though she never says as much, we’re given to the assumption that, like countless others before her, Christine has come to Lourdes—a small French town known as the sight of numerous Marian apparitions over the last century and a half which is visited by millions of Catholics each year—in hopes of a miracle she doesn’t expect to happen. She’s almost as much an enigma to both her fellow pilgrims and us as God is to her, and her subdued inscrutability acts as a means of drawing us in to this compellingly sphinx-like film.

Something of an outlier, Christine inspires varying degrees of unease among the rest of the flock. Though polite, the fact that she isn’t one to sugarcoat anything seems to alienate those with more delicate, dogmatic sensibilities. She speaks the kind of hard truths that make her more (self-)righteous fellow pilgrims turn their noses up, either because they find them ludicrous or, perhaps more likely, because they recognize (and repress) the truth in what Christine is saying. From us she evokes a certain amount of sympathy but, much more than that, respect and even admiration; several of her companions and helpers take the easier route by simply treating her as an object of pity. Christine—portrayed here by a wonderful Sylvie Testud in what should have been a star-making, award-winning performance—is entirely unassuming, and contrasted throughout by a young, indifferent, and immature helper named Maria who most often tends to her. She’s able to communicate so much with her eyes alone that, when she actually speaks, the power of her words is somehow heightened. “Did you have fun last night?” Christine asks her the morning after hearing the girl partying late; though the way she says it is non-judgmental, it nevertheless makes Maria uncomfortable for the way it speaks to the huge divide between their respective personalities. 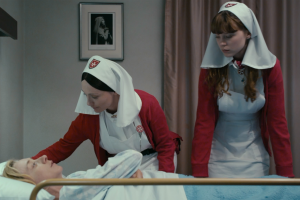 Sickness comes in many forms in Lourdes; Christine is far from the only afflicted soul. Some hide their malady, others wear it on their sleeve, and Christine accepts hers as a matter of course. When, halfway through the movie, something potentially miraculous occurs, she seems to be the only one who appears unsurprised. While others scramble about in order to understand it from a theological perspective and try to have it officially recognized as a miracle, Christine goes on living as though nothing has changed. And, for her, little has. Her (admittedly wavering) contentment comes from within, from some intimate place she keeps to herself. This makes her somewhat unknowable to us, but it’s in a way that draws us closer to Christine rather than distance us. Far from a mere “mysterious ways” cop-out, it makes her a compelling figure whom it takes several viewings to begin to fully understand. Much of the analysis of this film seems to focus on the unknowability of both the event and its consequences (only some of which we are made privy to), but to me this is something of an afterthought: Christine herself has always struck me as more interesting. The power of the watershed event comes from the fact that we want to know more about her, and not the other way around.

There are an abundance of moments so subtle and pristine as to almost go unseen were they not so rich as to demand a closer look. Lourdes handles its exceptionally delicate (yet also dense) subject matter with a certain airiness, but does so without ever feeling slight. Neither Christine nor the film as a whole cry out to be heard by God or even by us; they whisper instead, commanding the kind of attention that ensures we’re hanging on their every word. Understatement is sometimes feigned in order to mask an attempt at profundity, but here it’s both genuine and an unqualified success. The only reason I hesitate to call it a masterpiece is because the film itself seems entirely unconcerned with that kind of acclamation, especially since it comes in the form of words. Lourdes doesn’t need or even ask for this; it’s content to simply pass through us in its own way, unconcerned with whether we notice it or not. 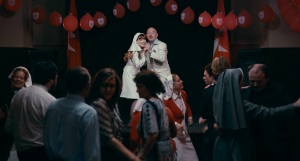 Audio/Visual: Most impressive here are the colors. Lourdes‘s palette is, for the most part, subtle and unobtrusive, but there are an abundance of eye-catching reds and Virgin Mary blues in nearly every scene that contrast beautifully with both each other and the more subdued greys and off-whites. As captured by Palisades Tartan’s 1080p transfer, these elements are not only sharp but pristine. The film makes extensive use of fixed camera angles and long takes, and there’s so much going on internally at any given moment that the visuals themselves often seem more dynamic than they actually are. It’s a subtly masterful interplay between the film’s inner-outer tension, as well as implicative of Hausner’s overarching concerns. Music, through infrequent, is almost always devotional (save for a wonderful dance sequence at the end), and the effect of a recurring Bach piece is as densely wistful as can be hoped for.

Supplements: Nothing of substance, unfortunately: a few trailers and a “talent interview” with director Jessica Hausner that clocks in at just under two minutes. Apparently Hausner has decided to take on the role of an absent god and leave it to us to piece together the meaning of her film, especially its ambiguous ending. Personally, I welcome the task.