HIT SO HARD: THE LIFE AND NEAR DEATH STORY OF PATTY SCHEMEL

(Hit So Hard is now available on DVD

and Blu-ray. It is distributed by Well Go USA Entertainment and Variance Films and opened in NYC on Friday, April 13, 2012, before moving to Los Angeles and beyond. Visit the film’s official website to learn more.)

VH1’s Behind the Music: Courtney Love (2010) was one of the best rock-docs of recent memory. It wasn’t just that it gave itself completely over to the quotable self-aggrandizement of Love, but it was also so craftily edited. The solo interviews of dismayed former members from her alt-rock outfit, Hole, and friends who will never be in the same room ever again, practically became reaction shots when cut together. It felt like myth.

Nineties nostalgia necessitates variations on the same legend. Hole’s founder Eric Erlandson recently published a collection of prose poems, Letters to Kurt. And now, drummer Patty Schemel provides an amiable entry-point to the well-documented story of Hole in Hit So Hard: The Life and Near Death Story of Patty Schemel. Director P. David Ebersole chronicles her drug addiction and recovery, throughout which she seems likeable and unassuming. 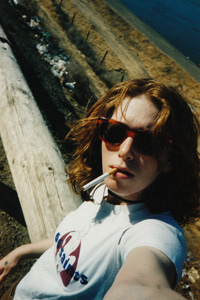 Hit So Hard both feeds into the nostalgic myth of ’90s grunge, and in its more interesting moments, suggests what some fans and naysayers (I belong with the latter) have always insisted: for all the drama and antics, the Hole of Live Through This and Celebrity Skin were distinctive because their music aimed to a level of shiny pop professionalism. “Patty was heavy,” dishes an amusing Nina Gordon (formerly of Veruca Salt, another alt-rock band with its own infamous drama), “and you could never tell what Eric was thinking.” When they’re not talking about the drug use or Courtney’s on-stage antics, Hole members admit in interviews—every person in the movie is interviewed solo—that they weren’t friends, and they didn’t really hang out.

Still, that very ’90s tension—between “authenticity” and “selling out”—manifests itself. Just after Schemel thought she had kicked her drug habit, the band began recording Celebrity Skin, with a real pop producer, Michael Bienhorn. Bienhorn replaced Schemel with another drummer during the recording. As interviewees explain, it’s common in the record industry, and Schemel was still supposed to play on tour. But Schemel quit, and fell back into her drug use. To its credit, the film conveys both the rationale behind Schemel’s in-studio replacement, and the cruelty of her relapse.

Though it lacks structure, Schemel’s fuzzy Hi8 footage, captured on tour in the ’90s, is nostalgic and funny. A brief cameo from a hammy Drew Barrymore is a particular highlight, “My memoirs are stored in Patty Schemel’s uterus,” she slurs to an MTV cameraman. And while she might now be the Beetlejuice of New York Fashion Week, Courtney Love, interviewed eating a cookie, is still captivating. She recalls that she heard the news that her bassist, Kristin Pfaff, died when she was on the phone with music video director Sophie Mueller, “I got to go, my bassist just died… I still haven’t talked to Sophie Mueller [since then].” Love turns tragedy into a game of namedropping that feels far more urgent. She’s a star.