Mid-20th-century literary critics used to decry the dangers of the “intentional fallacy”—the tendency to read and interpret a work of art through extra-textual lenses: what we know of the author’s life, the author’s intention as stated in an interview or a letter, that kind of thing. The anti-intentional-fallacy approach has its virtues, in concentrating a reader’s (or viewer’s) attention on the work itself. But sometimes it’s difficult to be so pure-minded.

When Bay Area filmmaker Richard Wong (2006’s Colma: The Musical) stepped onstage at the Asia Society to introduce his new feature Option 3, which screened July 11 as part of the Asian American International Film Festival, he made it damn near impossible to take authorial intention off the table. He told the audience that Option 3 was “not meant to be a movie in the usual sense.” The film, he said, “was made at a dark time in my life”: receiving a small production grant from the Center for Asian American Media, he put the money into an “experiment… a dark take on loss” that he thought might help him work through his misery.

Hello, intentional fallacy. Have a seat—the movie’s about to begin. 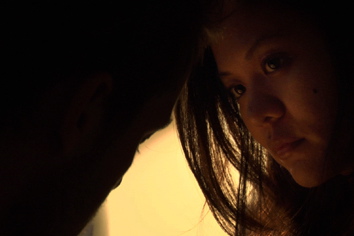 Right away, we can tell this isn’t going to be a conventional narrative film: disorienting sound/image mismatches, and abrupt cuts between seemingly unrelated locations, set the tone. Soon a story, of sorts, begins to take hold. Jessica (Theresa Navarro) asks her boyfriend Ken (Preston Conner), “So have you thought about what I said?” We don’t hear Ken’s answer, but that question will hang over the entire tale. Cut to the two of them eating lunch in a restaurant. Theresa goes to the bathroom. She doesn’t come back. The cell phone she left on the table rings. Ken picks it up, and hears a strange man’s voice tell him that if he ever wants to see Theresa again, he has to go to a certain address. With that, Ken is off and running, and he never stops running until the very end, as the kidnapper directs him from one location to another, all over San Francisco. The plot setup may be generic; the execution is anything but. That unsettling, anything-can-happen vibe established in the first few minutes continues all the way through—in fact, the movie only grows weirder and weirder. By the time you get to the musical number with the backup violinists, and the deadly high-speed bicycle race in Golden Gate Park, either you’re riding with whatever craziness the story throws your way, or you checked out long before.

I rode with it. Because it became clear to me early on—thanks mostly to Wong’s introduction—that the genre-movie aspects of Option 3 are only a metaphor for what’s really going down. Which is what? Let’s see: a man who lost his girlfriend wanders the streets, reliving past moments of happiness in all-too-brief flashbacks, tormented by thoughts of where she is now and who she’s with… yep. It’s a breakup movie. Specifically, a post-breakup movie. More specifically, a post-bad-breakup movie. “So have you thought about what I said?” But of course he has. That’s all he can do, is think about what you said, and how you looked saying it, and how great it was when you were together. When the movie ended (Ken having reunited with Jessica, only to lose her yet again), and the lights came up, and Wong returned to the stage for a Q&A, I applauded. But what I really wanted to do was give him a hug. Or buy him a drink. He explained that the movie came together as he was spinning into depression following the end of a 12-year relationship. What’s more, by the time shooting began, Conner, the star, was also suffering from a recent breakup (”even worse than mine”). And so were the members of the small crew: “So it was a movie made by five really depressed guys.” By this point, head in my hands, sunk as low in my seat as I could be without actually lying on the floor, I’d changed my mind: I was the one who needed a drink.

François Truffaut once wrote, “I demand that a film express either the joy of making cinema, or the agony of making cinema. I am not at all interested in anything in between; I am not interested in all those films that do not pulse.” Option 3 may have been made in a spirit of anguish, but it pulses with moviemaking energy. I think Truffaut, a great poet of heartache in his films, might have been pleased by it. Wong is a wizard of color and movement, sound and silence, and this is one of the rare very-low-budget indies that looks like a million bucks, literally and figuratively. That said, it’s also a baffling, frustrating experience, one guaranteed to alienate some viewers. Of course, you could argue it’s not meant to be otherwise. Wong was baffled and frustrated when he made the film, and its protagonist is baffled and frustrated from first frame to last, so why should the rest of us get off easily? Mulling this over made me see the wisdom of the lit-critics who said it was only the tale, not the teller, that mattered. Did I need to know that the filmmaker was in pain when he made the movie? Did knowing that make me like the movie more than I would’ve otherwise? Ultimately, I decided, the answer to both was “no.” After all, as Oscar Wilde said, all bad art is sincere. If sincerity was all that Option 3 had going for it, I wouldn’t have been replaying scenes and images from it in my head days after it ended. The key to the film is that it’s a metaphor for a breakup, not that the director had just gone through a breakup when he made it. As a metaphor, as a movie, it’s a fascinating, original piece of work.

(Information about upcoming screenings of Option 3, plus a trailer, can be found here.)