ART OF THE STEAL, THE

(IFC Films is releasing The Art of the Steal on February 26, 2010, in select theaters; it can also be viewed on demand through Sundance Selects. Find out more at the film’s website. Anyone interested in learning more about the controversy surrounding the Barnes Foundation can find plenty of information here or here. Or read John Anderson’s book Art Held Hostage, one of the movie’s primary sources. The Barnes’s website is here.)

Don Argott’s new documentary starts off recounting the story behind the creation of the Barnes Foundation. Albert C. Barnes (1872-1951) was a Pennsylvania physician whose development of a popular antimicrobial medicine made him rich. He used his wealth to build one of the great modern art collections in private hands, with dozens of works apiece by Cézanne, Matisse, Picasso, and Renoir, plus some of the best paintings by Seurat, Van Gogh, and many others. The Foundation, housed in Barnes’s former residence in Merion, a suburb a few miles outside of Philadelphia, was intended as an educational institution first and foremost, its collection primarily available for viewing by its lecturers and students. Anyone else had to apply for permission to visit. A self-made man and a firm believer in democratic principles, Barnes was also something of an anti-establishment extremist and a deep-dyed eccentric. As one interviewee admiringly notes in The Art of the Steal, if Barnes received a request from, say, the art critic of the New York Times, he would likely say no—and would have his dog sign the letter denying permission with an inky paw-print. But given a similar request from a plumber who lived in New York, Barnes would roll out the metaphorical red carpet.

The early scenes of The Art of the Steal are informative, if fairly plodding and conventional in execution. But much of the film’s remaining running time, which details what became of the Foundation in the decades since Barnes’s death, is thrilling and revelatory. (It’s also somewhat problematic, in ways I’ll get to in a moment.) As the Foundation ran low on funds, and as its board of trustees expanded to include new members less devoted to Barnes’s ideals, the strict conditions laid out in the founder’s will were at first watered down gradually, then disregarded entirely. The old man had stipulated that the collection was never to be broken up, loaned out, or sold, but in 1991 the Foundation’s president sent dozens of its best-known paintings on a grand international tour to raise revenue. After that, a group of city and state political leaders, business interests, and nonprofit foundations, hungry for control over this world-class cultural treasure, pushed through a plan to move the entire collection out of Merion, to a location in downtown Philadelphia. The collection’s new home is scheduled to open in 2012, and is expected to reap a pirate’s bounty of tourist money for the city. 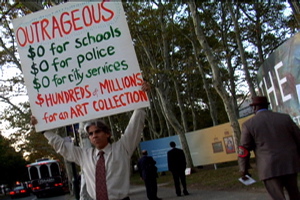 So The Art of the Steal becomes a kind of crime thriller about the violation of a dead man’s wishes and the theft of a great art collection. Argott and his team have pulled off a coup of investigative journalism. They name several names, and produce more than one smoking gun. The main achievement of the film comes in the way it anatomizes the circulation of money, power, and influence through a number of American social structures: politics, higher education, the justice system, the museum world, charitable foundations, and more. Rare is the documentary that gives such a clear sense of how these worlds operate. And all this is carried off with impressive filmmaking skill and storytelling panache; the movie is a fun, fast-paced whodunit that before long gives us the answer: here’s whodunit, and why, and how.

And there we come to the problem. The Art of the Steal’s argument is delivered with the crusading zeal of a prosecuting attorney. But all prosecutors lie—or, shall we say, all prosecutors willfully fail to tell anything resembling the whole truth. (The same applies equally to all defense attorneys, of course.) This is to be expected: it’s in the nature of the job. But isn’t it fair to hold serious documentary filmmakers to a different standard, one more nuanced, complex, and ambiguous, more open to the many-sidedness of reality? The Art of the Steal is so intent on working our sense of moral indignation that it taints its own claims to truth. 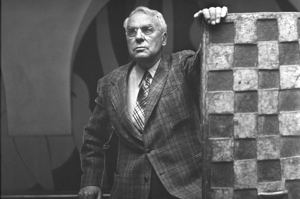 To take the example that bothered me the most: the various talking heads the filmmakers put on display, and the film’s very structure and mode of address, argue that the main story here is the contravention of Barnes’s will. But what is so sacrosanct about one individual’s decades-old will, especially when public access to so much significant modern art is at stake? Granted that the co-optation of the collection was a money-and-power grab made in secret, a point the film makes convincingly—but is it ultimately so terrible that the art is being moved to a place where many more people will be able to see it every day? Why does the movie fail to provide any information about Barnes’s ideas on art education (which determined his rules regarding everything from how his paintings were hung to who had the right to see them), while asserting that those ideas were of such great value that the rules needed to be preserved in perpetuity after his death?

Such questions will probably occur to many viewers of The Art of the Steal. The movie stridently avoids addressing any of them. Yes, I know—the filmmakers have only so much time to tell their story and only so much ground they can cover, and they’re obligated to choose a point of view, and so on. But The Art of the Steal goes further than it needs to in simplifying the issues it explores, and as far as I can tell, it does so in order to be more “entertaining” and “accessible,” to score easy points, and to get the crowd’s fists pumping. Self-righteousness is as disagreeable a quality in art as it is in life, and this movie is bloated with it. 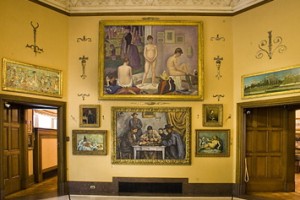 That said, if the film helps to shine a light on the Barnes’s recent history, and to reinvigorate the debate over its future, it will have performed a real service. And despite my misgivings, I’m grateful the movie exists—not only for its own merits, but because seeing it spurred me to take a weekend trip to the Philly area with my girlfriend to visit the Barnes before the collection moves. The house is less grand than one might expect; each room is fairly small and each wall is packed to near overcrowding. It’s an intimate experience. You’re surrounded by what seems like a picture book on modern art come to vivid, roiling life: several of the most beautiful paintings of the last 150 years are all around you, sometimes mere inches away. These masterpieces share the walls with less exalted paintings and drawings, African sculptures, Native American ceramics, everyday household objects, and much else, giving the collection a very different feeling from the antiseptic, uncluttered spaces of most contemporary museums and galleries. Barnes arranged the works not by artist or period, but by a more unorthodox and intuitive sense of connections—subject matter, line, color, and design. All this argues in favor of the perspective put forth by one of the pro-Barnes faction quoted in the film: that Barnes’s vision for the collection represents a genuinely “hand-made thing in the machine world.” Still: while the house in Merion provides a unique and pleasant atmosphere, that’s nothing compared to the overwhelming aesthetic rush generated by the paintings themselves, and I remain as yet unconvinced that the profound thrill I experienced standing before works like Matisse’s Le bonheur de vivre and Cézanne’s The Card Players would be measurably diminished in a different setting, as The Art of the Steal noisily insists. But see the film, and make up your own mind about it—and far more importantly, if you haven’t already, go see the Barnes itself. Now.