(Four Days in October is now available on DVD. It premiered on ESPN at 8pm on Tuesday, October 5, 2010. Visit the film’s page at the 30 For 30 site for more screening dates and times.)

This question is for all you New York Yankees fans out there. Don’t you remember how awesome it felt to be entering the bottom of the 9th in game four of the 2004 AL Championship Series against your most hated rival, the Boston Red Sox? Not only were you guys up 4-3 in the game—you were up 3-0 in the best-of-seven series. With your automatic closer, Mariano Rivera, stepping up to the mound, there was no way in hell you weren’t going to win this game. But even better, you were going to humiliate the Red Sox after last year’s heated ALCS and stick the rusty knife even deeper into their cowering shells with this emphatic sweep. Remember how funny that was? But then something happened. The Red Sox mounted a seemingly impossible comeback and pulled out the game thanks to yet another clutch homer from David “Big Papi” Ortiz. So what, though, right? It was only one game. Not only was the longstanding curse of the Bambino still in full effect, but even removing that debatable superstition from the equation, an objective statistic could not be refuted: No team had ever come back from a 3-0 deficit to win a MLB post-season series. Remember that? And then do you remember what happened the next night? And the night after that? AND THE NIGHT AFTER THAT? I DO!!!!! NOW THAT WAS FUNNY!!!! HAHAHAHAHAHAHAHAHAHA!!!! 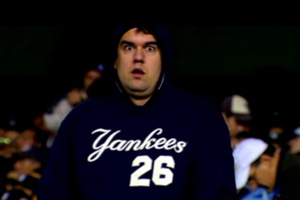 Cough…. Cough… Pardon me… I’m sorry about that… (No I’m not). Seriously, though, it’s impossible not to carry personal baggage into a film like Four Days in October. While I’m from Baltimore and align myself with the hapless Orioles—no need to bother laughing back at me but thanks—if I had to pick one team to root for on a day-to-day basis, it would be whoever is playing the Yankees. (For the record, that’s not why I had trouble with Barbara Kopple’s recent 30 For 30 entry, The House That Steinbrenner Built—it’s that it was dripping with as much saccharine gooiness as the head-scratching Chris Evert/Martina Navratilova love fest Unmatched.) For those personally invested in this particular chapter in sports history, the reactions to this documentary can already be predicted: Red Sox fans will swallow up Four Days In October with cold pints, warm hugs, and bright smiles, while Yankees fans will simply—and loudly, and abrasively, and obnoxiously—point out that 2004 isn’t 2010 and where are the Red Sox in this post-season, huh?

Baggage in this situation is unavoidable, and yet, objectively speaking, Four Days In October does revisit a truly momentous occasion in sports history. The 2004 ALCS featured a comeback so miraculous, inspiring, and downright impossible, it’s surprising that it hasn’t been already turned into a Hollywood movie (though I’d much rather see Abel Ferrara’s adaptation of Jeff Pearlman’s The Bad Guys Won, about the bacchanalian 1986 Mets). That this unheard of comeback was orchestrated by group of self-labeled “idiots” and “goofballs,” who turned a casual question (“Why not us?”) into a David-versus-Goliath rallying cry, only makes the story more endearing.

Directed by Gary Waksman for Major League Baseball Productions, Four Days in October cleverly compiles footage from many sources, including, most jarringly, actual home video taken by wise-cracker Kevin Millar. Seeing Millar’s (at least I’m pretty sure it’s Millar) consumer-grade video footage of Ortiz dancing in a towel, or Pedro Martinez sitting on an airplane carrying the championship trophy, feels like some sort of first. 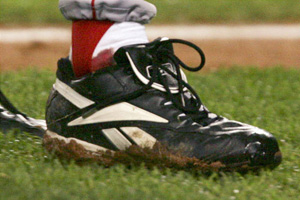 Of course, to build tension, Four Days in October features clips of newscasts to build real-time momentum; in the space of this fast-moving 50-minute film, it’s fascinating to see so many sportscasters try to wrap their brains around what is happening. There is also a healthy inclusion of home video footage shot by fans in the stadium and in packed bars to further heighten the tension. For some present-day context, 30 For 30’s executive producer and lifelong Red Sox fan Bill Simmons shares a drink with comedian Lenny Clarke as they reflect upon a moment that still clearly gives them a visceral thrill. And there are also reflections from those who played in the series (these would be Red Sox players, if you hadn’t guessed).

Most importantly, there are the games themselves. Each of these gems would be deemed classics on its own, but when placed in the context of this historic series, they become something altogether more indelible:

Game 4: That bottom-of-the-ninth rally off the untouchable Rivera to tie the game at four, followed by two scoreless innings and Ortiz’s climactic two-run blast in the bottom of the twelfth (final score: 6-4).

Game 5: Down 4-2 in the bottom of the eighth, the Sox score two runs to tie. Then, a high-pressure stalemate until the bottom of the 14th, when Ortiz struck again with a single to center that brought Johnny Damon home (final score: 5-4).

Game 6: There’s Willis Reed. There’s Kirk Gibson. There are many who have played through pain and injury to lead their team to victory. But I dare even the most devout Yankees fan to say that Curt Schilling’s accomplishment in game six was nothing short of legendarily heroic. Yes, we knew Schilling was pitching with an ankle so bad that it was bleeding through his sock, but in Four Days In October we see actual home video footage that shows where the pre-game surgery on his right ankle tendon sheath took place. Not only did Schilling fight through the pain to pitch well; he pitched masterfully well. 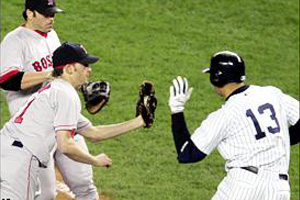 This was also the game that exposed Alex Rodriguez’s true colors as a playground sissy once and for all. In the eighth inning, the Red Sox lead cut to 4-2, Rodriguez came to the plate. After making contact, he tried to beat pitcher Bronson Arroyo to first base. Looking like my mother on a particularly fey day, Rodriguez illegally swatted the ball (and glove) out of Arroyo’s hand. The Red Sox complained, the umpires joined forces to discuss the situation, and they proceeded to… make the correct call?! Calling Rodriguez out and sending Derrick Jeter back to first base, Rodriguez stood in disbelief, acting innocent. Though Kate Hudson assures us that Rodriguez is a stallion in the bedroom—a bedroom in which another former lover revealed Rodriguez had at one point hung two paintings of himself as a centaur on the walls—this pathetic swat and subsequent denial is all that really needs to be said about Alex Rodriguez.

Four Days In October moves at such a brisk pace that I almost wish it had been longer to further build the tension. But even with that minor quibble, this remains a sturdy document of sports history as well as something for future Davids in every sport to look to as they prepare to meet their own personal Goliath.