(Destricted is now available on DVD

Destricted is a compilation of eight short films that “explore the fine line where art and pornography intersect,” according to the press materials. The concept alone is intriguing, and the lineup of directors includes luminaries from the worlds of cinema, painting, photography, installation art, and more. Quality-wise, the results proved to be a mixed bag, although perhaps this was to be expected: compilations always are. And in this particular case, an additional factor applies. Just as everyone has different tastes in movies, everyone has different tastes in sex, so the fundamental truism behind any film review—what gets me going is likely to be different from what gets you going—is even more true than usual here. With that said, here’s my report, based on a single late-night viewing.

The shorts by Matthew Barney and the Brazilian artist Tunga have much in common. Both center on outlandish, pseudo-mystical conceits: Barney’s involves a sort of ecological superbeing called “Green Man” having sex with a enormous earth-moving machine; Tunga’s stars an attractive couple whose lovemaking incorporates both the scatological and the alchemical, as “the man’s penis becomes mineral and the journey of fulfillment becomes one of penetrating destruction and excremental rebirth” (the press materials again). Both films are boldly conceived and imaginatively designed. Alas, both struck me as plodding, frictionless, and cinematically inert. 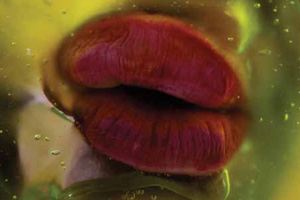 Two of Destricted‘s eight directors are women, both of them painters, and their pieces are vibrantly visual: Marilyn Minter’s extreme close-up of a sensual female mouth appearing to smear goo all over the camera lens with her lips and tongue is a candy-colored treat, even if it wears out its welcome before its seven-plus minutes are up; Cecily Brown’s under-three-minute stop-motion animation of a frisky couple fucking is paced just right. 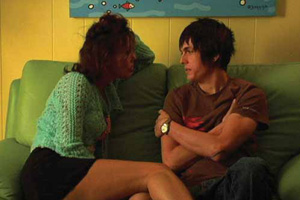