Gaspar Noé has been busy recently. The controversial French-Argentine filmmaker has his next film Vortex opening May 6 from Utopia. But that same day also marks the release of his long-awaited experimental and hallucinatory Lux Æterna. This 50-minute film, which premiered at the 2019 Cannes Film Festival, invokes the use of split screens, photosensitive lighting, and vintage footage to tell a story of a chaotic witch film shoot.

Béatrice Dalle and Charlotte Gainsbourg star as fictional versions of themselves trying to keep it all together amid production. Also starring are Abbey Lee (Mad Max: Fury Road), Karl Glusman (Noé’s Love), Félix Maritaud (Sauvage), and Claude-Emmanuelle Gajan-Maull (Noé’s Climax). Yellow Veil Pictures will release it on May 6 at Metrograph in NYC, Los Angeles on May 13, and a nationwide rollout after.

Watch the new trailer below: 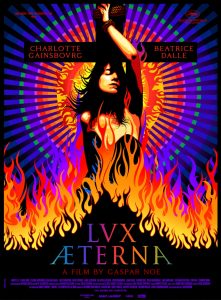