(Billy the Kid screens Sunday night, March 22nd, at 11pm as part of the Cinema Nolita/Hammer to Nail screening series in downtown Manhattan. Visit the official website to watch the trailer and then buy the DVD at Amazon

The first time I saw Billy the Kid, I had just come out of a screening of Juno feeling absolutely disheartened. I had gone into Jason Reitman’s film rather neutral, and having somehow avoided most of the pre-release buzz, I had few preconceptions about what I was about to see and how I would react. Without digging up a tiresome debate, I can simply say that I felt betrayed. Not only by Juno’s corporate-twee factor, but what I felt to be the film’s emotional and psychological distance from its characters. One of the more unfortunate aspects of a post-Wes Anderson cinema is not only the infantilization of emotions, but also the imbuing of younger characters with the psychology of someone twenty (or more) years their senior. However, neither Juno’s global disconnectedness—as though its characters aren’t actually experiencing the events in the story—nor its all’s-well-that-ends-well narrative, is surprising: it’s merely another film in a long tradition of unrealistic high school narratives.

But then, fifteen minutes later, I was sitting in a theater watching Billy the Kid, and I thought, Here is an antidote. Unlike the exaggerated characters in even the best high school movies, there’s something unshakably authentic to this fifteen year-old-kid from Brunswick, Maine with a rat tail who wears trucker t-shirts with cut-off sleeves. And it’s not just because Billy the Kid is a work of non-fiction, but rather that director Jennifer Venditti has managed the incredible feat of both finding and conveying cinematically a character who is absolutely singular and unique, and at the same time exists as an “everyman” who sums up our collective adolescence. 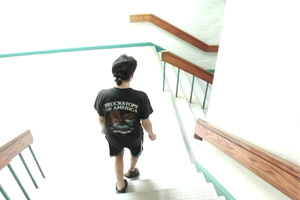 Billy and his mother both make brief mention of how he is somehow “different” from the others. “I’m not black, I’m not white, not foreign… just different in the mind—different brains, that’s all,” explains the boy, while his mother recalls his uncontrollable temper tantrums as a child. Even in the film, his furtive side-glances and slightly stammering speech both call attention to themselves. While we can deduce that he suffers from Asperger’s Syndrome, the film smartly never explains this and instead treats Billy like any normal teenager. Billy the Kid refuses to be a disability-movie, instead leaving the varying diagnoses vague and inconclusive, and allowing his eccentricities to be what they are: colorful facets of his complex personality. In fact, the more one tries to pin down Billy’s “uniqueness,” the more one is confronted by how un-unique he really is. It is one of the greatest compliments to say about Billy the Kid, “Yeah, I can relate to that.”

It would be hard to create this character and story from scratch. Better dialogue couldn’t be written. Throughout the film, Billy’s spontaneous musings (which range from the confessional to the philosophical, and even on-the-spot poetry) provide not only great insight into his character, but also moments of sincere, affectionate humor. When he wants to, Billy can be uproariously funny, but often the innocent delivery of his expressions belies an unexpected depth. After experiencing his first kiss with his first girlfriend, he says to a group of older men hanging around outside of a diner, “Years of loneliness have been murder.” The men break out in sympathetic laughter, and one of them says, “All right kid, I like that!” We laugh not at Billy, but at the fact that he doesn’t realize how truthful and perceptive he is. His phrases aren’t the typical chatter expected of a sophomore in high school, and yet they don’t seem at all affected or inauthentic. Billy may receive special attention as a student while at school, but in so many ways he is far beyond his mere fifteen years. 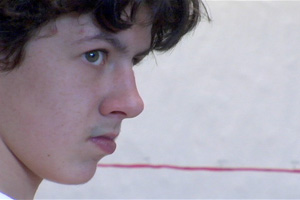 What’s so extraordinary is the way in which Venditti captures the internal world of Billy—the overwhelming sense of emotion and thought that steals him away from the everyday circumstances surrounding him. “Sometimes I think the imaginative world’s much better than the real world,” Billy tells us, “but then, of course, there’s one difference: imagination ain’t real.” Venditti best captures this divide between reality and fantasy when Billy plugs in his electric guitar and prepares to rock out. He puts in a live concert DVD and takes off his shirt, but when he goes to hit the first chord no sound comes out. Frantically he shakes the amp and adjusts the chord, and finally—music! Venditti switches to the DVD’s soundtrack, removing all natural audio as Billy imitates his rock ‘n’ roll idols on-screen. But then she cuts to a shot taken from outside the house. We hear not the flawless audio of professionals, but the fumbling of a teenager learning to play guitar. Rarely have more glorious sounds been heard on a movie’s soundtrack: the notes aren’t all there, the rhythm is slightly off, but he’s playing the song he loves, and the passion is unmistakable.

While not indulging in his passion for rock music (Kiss, specifically), Billy goes through the things that all of us do—classroom frustration, family drama (“Do teenagers always bite off the heads of their elders?” he asks his mother), and awkward and emphatic first relationships. Ebullient over his new love, Heather, Billy sprints down the deserted small-town street illuminated by streetlamps. The way he pretend-boxes with mailboxes and leaps atop benches recalls Ernest Borgnine’s triumphant run at the end of Marty. At moments like these, Billy is so lost in his own world that it is as though he has forgotten the camera’s presence. And Venditti is respectful of his space. Out on the street, she lets him wander off into the distance, where he sits down on the sidewalk and improvises a poem: “Her eyes are like onyx glinting in the sun.”

Billy, himself, using his inimitable palette of expressions, sums up the magical power of Billy the Kid. Explaining his reaction to An American Werewolf in London, he says, “That scene really attacked me, though I knew it wasn’t real. You ever felt that way?” My answer is yes. Many times throughout Billy the Kid I felt “attacked,” but only in the most gentle, empathetic ways. And unlike Werewolf, this film is very much real.