(Danland world premiered in the Documentary Competition section of the 2012 Slamdance Film Festival. Visit the official website to learn more.)

We see him lend his talents to a multitude of on-screen leading ladies, and here Berger nicely straddles (haha) the line between showing too much and too little, staying true to the subculture’s easy attitude toward hardcore sex, while keeping the focus on the characters. Dan’s style as a lover is surprisingly affectionate and cuddly, and it turns out he has a powerful need for the intimacy of real relationships (the camera spots a copy of Romance for Dummies in his apartment). 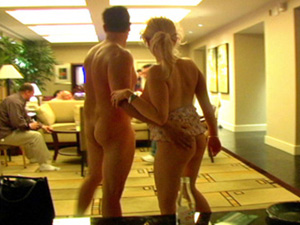 Dan burns through a girlfriend in the first reel; then his ex Emily starts drifting back into the picture. She’s the love of his life—a college student whose parents don’t approve of Dan’s career choice. Meanwhile, he starts dating Vanessa, a pretty, helpless colleague swimming in a tsunami of drama.

In the final reel, the film goes skidding on an icy road toward a sudden, tragicomically thin Vegas wedding. Mama Leal shows up and the resemblance to Dan is remarkable: friendly and articulate, she ties her answers to questions about her relationship with him in tidy little bows. Her shortcomings as a mother, which she airily acknowledges, open a window on what’s made Dan what he is.

He’s trapped in Danland, the strange and surreal world of his own making, in a cocoon persona that keeps him a hungry ghost starved for genuine love.