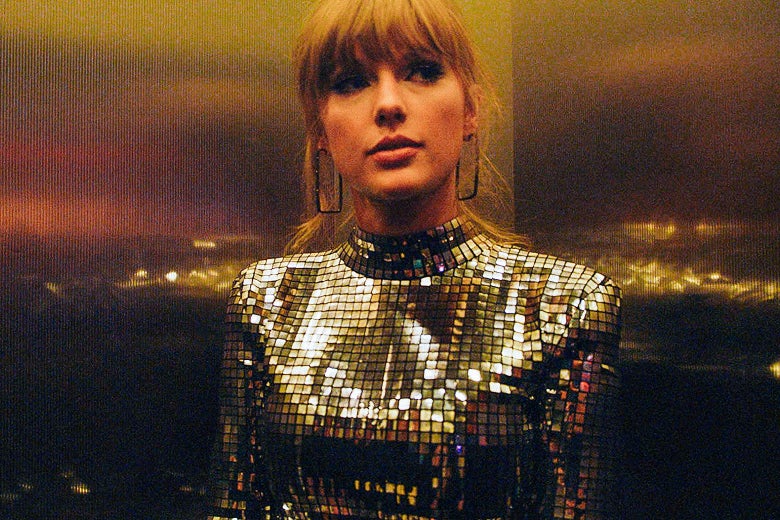 If someone like me, with no prior interest in superstar Taylor Swift, can find the new documentary about her, Miss Americana, both fascinating and inspiring, then imagine what her fans will think. Are you a Swiftie (or “Swifty,” depending on your spelling preference)? Then this entertaining and informative portrait of the famous singer/songwriter will be sure to please, comprehensive as it is in its look at her work and life. Though extremely flattering of its subject, the film does not feel like a hagiography, given Swift’s own humility and self-deprecation, throughout. It is definitely an appreciation, however, filled with marvelous moments (some featuring delightful pets), both archival and captured for the movie. Helmed by the very capable Lana Wilson (The Departure), the film is simultaneously an insightful analysis of the just-turned-30 global phenom and a tribute to those qualities that make her worth following.

She loves her cat, that’s for sure! We start on a scene of Swift playing piano, while a frisky young feline crawls over the keys. Soon, that kitty, now older, will travel with her in a special backpack, equipped with rear-facing bubble to allow the animal to look out. Swift’s mom also owns an animal: a huge Great Dane, which she calls her “cancer dog,” a gift to herself  upon diagnosis of the disease (she is better now). The critters help lighten the mood, reminding us that no matter how much success someone achieves, they have the same need for basic comforts as everyone else. They also have the same stresses and complexes, as Swift discusses her past problems with an eating disorder. And even a powerhouse like Swift suffers the same issues facing women everywhere, as men (and other women) seek to knock her down. She’s too tough for them, and always gets back up.

There is so much more here than cats, dogs, eating disorders and sexism, however (though that would certainly be enough for a compelling narrative). Wilson quickly walks us through a montage of Swift then (at 13) and now (almost 30), hitting the high notes of her early stardom, at 16, in the country-music business, and the rapid rise to her 2009 MTV Video Music Award – an honor interrupted by Kanye West – followed by a string of #1 albums that saw her cross over into the pop charts. And then…the inevitable backlash, brought on, at least as it seems here, by the usual jealousy people feel towards those who seem too sweet for their own good. As Swift explains, the sudden #TaylorSwiftIsOverParty social-media storm in 2016 really hurt since people like her get into this racket at least in part because they are insecure and crave approval. And so she took a year off,

Yes, I know: let us cry a river for the poor little rich girl (a rich girl who had earned her riches through hard work, to be sure). But watch an edited sequence of pundits opining on a woman they know only from afar, and you might develop at least some sympathies. More importantly, these events helped Swift begin to find a voice outside of her musical output. A prolific writer with a knack for storytelling, Swift has a tremendous singing voice, but after 2017, she found her adult-in-the-world voice, able to speak her mind beyond the restrictions of fame and the fear of losing it. First, she sued a radio DJ who had sexually harassed her (and won). That then motivated her to look at the state of our nation, become disgusted with attacks on women’s rights, and put out a call to action for the 2018 midterm elections. Though the senatorial candidate from Tennessee (her home) she urged people to vote against – Marsha Blackburn (whom she calls “Trump in a wig”) – won, her efforts did, at a minimum, lead to a surge in voter registration among the young. So there’s that.

And now here she is, the subject of a very fine film and still a star, her latest album, “Lover,” just out this past year. Wilson embeds herself within the composing and recording sessions, which are fun and deliciously revealing about the process of creation, and has fun cutting back and forth between Swift’s excited description of how she wants the crazy music video for her song “ME!” to go and that actual video (an homage to musicals like La La Land and An American in Paris). We get it all and learn a lot, but perhaps the best part of the experience is just seeing the growing confidence of a woman who loves what she does and, much to our benefit, looks to continue doing it for as long as she can.