A Conversation with Morrisa Maltz (INGRID) 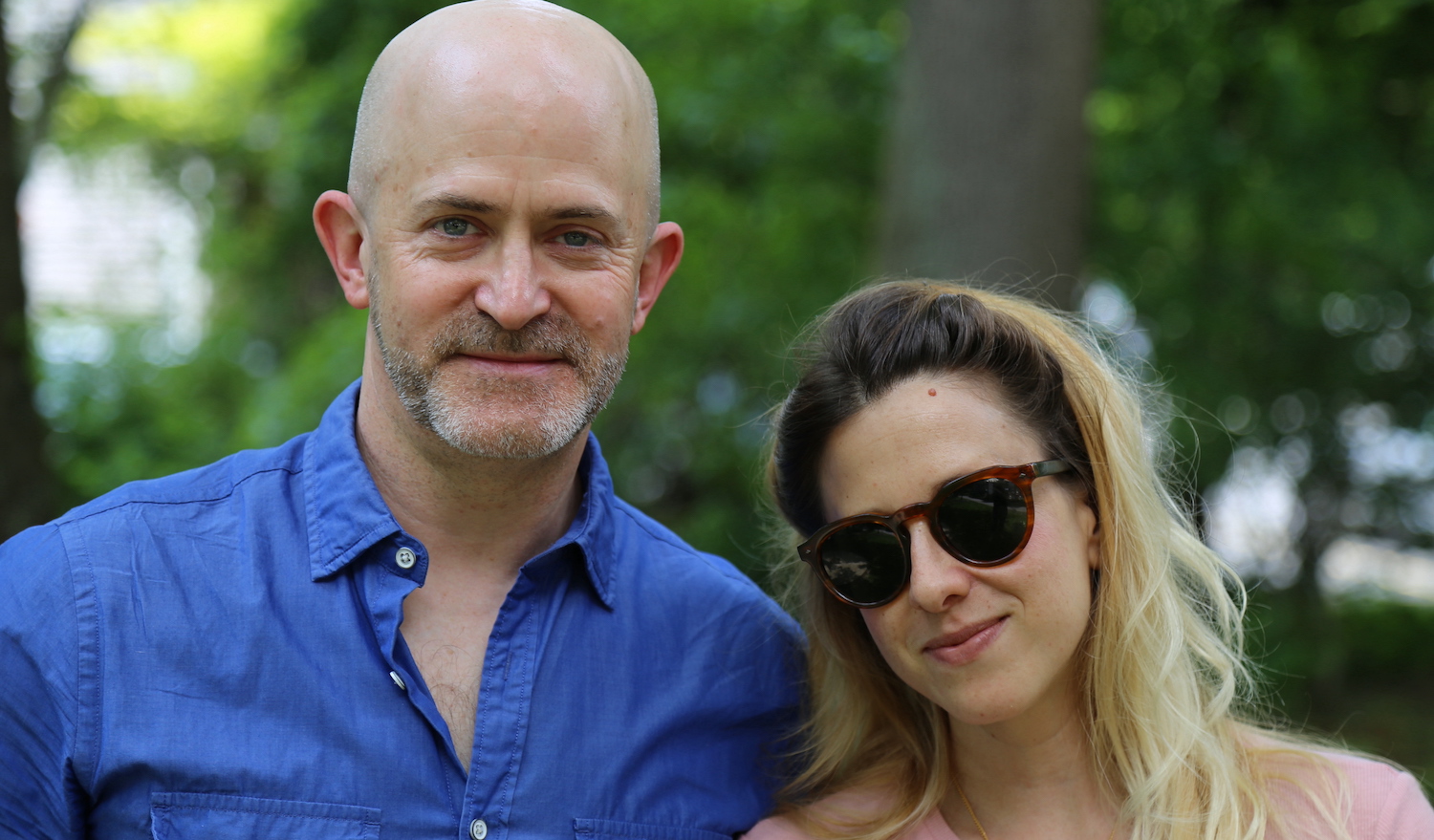 I met with director Morrisa Maltz on Friday, June 8, 2018, in Baltimore, to discuss her lovely documentary Ingrid, which I reviewed out of the 2018 Slamdance Film Festival. The movie tells the story of septuagenarian Ingrid Gipson, a once urban socialite now living on her own in the woods, where she tends to her land and animals (some of which she eats) while continuing to create the art that makes her happy. The film combines lyrical visuals with sharp commentary on how society views atypical behavior. Here is a condensed digest of our conversation, edited for length and clarity. 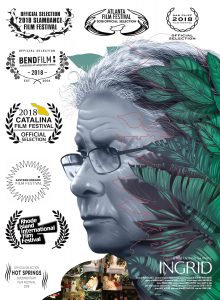 Hammer to Nail: So, I read in your press notes that for the two years prior to your first meeting with Ingrid you had been “traveling across America trying to find people who make things but do not consider themselves artists, in order to ask them why.” Before I ask you about Ingrid Gipson, I’d like to ask you about that project. Is it still ongoing?

Morrisa Maltz: No. Once I found Ingrid, I sort of stopped that search, although I’m definitely open to meeting other people like that as I travel. I still look for outsider artists, but not in the way that I was then. But yeah, for about two years, before I met Ingrid, I had an ongoing list of people that I found in the corners of the internet, in local newspapers, in various towns across America. like a guy who built a crazy house in the forest that got written up in the paper. I was trying to visit those types of people as often as possible.

HtN: So, then, how did you meet your 74-year-old subject Ingrid Gipson and then decide, “OK, forget that project, I’m going to focus on her”?

MM: Well, I think that project, for me, was…I was questioning my own reasons for making things. My father passed away when I was really young and I started making things after that and never stopped. And then, in my later twenties, when I was starting to make more of a living from my work, I started questioning that, and why I was doing it. And so, meeting those people wasn’t really a documentary project, but for my own interest, if that makes any sense.

And so then, the more you meet people and the more you talk about how you spend your free time…I was in Dallas with another subject that someone had told me about, and I met someone via the Airbnb I was staying at, who said, “Oh! I think I heard about this woman from Dallas, living in the woods, who has been making stuff out there.” A friend of a friend had her number, and I called her immediately and drove out to meet her.

And then how I decided to make a doc specifically about her was because she was the first woman out of any of these people I had met. All the rest were men: men definitely tend to peel off from society more, have their own life and make their own stuff and become hermits. And then Ingrid had this whole fascinating story that went along with that. She wasn’t just somebody in the woods, making art; she had all of these layers to her story. So, it was pretty clear from the moment I met her that she should have a documentary made about her.

HtN: That’s interesting what you just said about men being more inclined to be hermits. Is this an actual thing? I mean, I know we think of people like Ted Kaczynski–the Unabomber–and other people going off to be by themselves, but is this a scientifically known thing, that men are more likely to isolate? 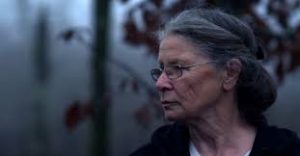 MM: Well, I haven’t done the scientific research on it, but in the way that it’s shocking that a woman like Ingrid would leave her kids and run out into the woods, for men I think it’s a little more common that they peel off, and it’s not this huge shock, which is why Ingrid’s story is interesting.

HtN: That makes sense, because when a man does it, nobody’s horrified. That makes total sense.

HtN: We should say, though, that Ingrid didn’t abandon her kids as children…

HtN:…but merely as adults. She’s entitled to do what she wants to do. They’re adults.

HtN: So, in your press notes, you also discuss your experimental video and art background. To someone who does not know any of your previous work, could you describe what you had done prior to making Ingrid?

MM: Sure! If you’re familiar with the work of Maya Deren or Pipilotti Rist, there are certain artists who are more avant-garde filmmakers. It’s just them and a camera. For years after college–maybe 5 to 10 years afterwards–I had an art studio, that I still have, in L.A., where I would build sets, dress up and make whatever I could make with a camera and myself. It was just a lot of hands-on, weird experimental videos that would play more in a gallery or museum setting. And I think the switch, for me, was that not many people see video art. I mean, people do see it, but it doesn’t have the power to move out of the art realm as much as film does. So, it was kind of an organic switch.

HtN: Got it. Now, in what ways do you see your background in experimental video having an affect on your aesthetic for Ingrid.

MM: Well, for me, Ingrid is a very visually compelling film–and that’s how you wrote about in your review–and I think, for me, the imagery is incredibly important, which comes form my visual background. As silly as it sounds, a lot of shooting Ingrid was me and the DP [Director of Photography] running around, looking for ants, and bugs… (laughs)…and a lot of things that we were not sure how they would fit into the narrative, but I had confidence that collecting a lot of visuals like that would end up playing a huge role in the narrative, and it did.

I think, also, that documentary is a really great format, coming from experimental video, because in documentary, you’re piecing stuff together, and you can continue to film and build a story, and that’s a lot of how my video art worked. We would just film a lot of stuff and then figure it out in the edit. Documentary really matches that format.

HtN: You talk about filming bugs, and your press notes mention Terrence Malick, and I’m sure anyone who sees your film would agree with such a comparison. That is one of the things–the cutaways to nature–that makes your film feel like a documentary version of Malick.

HtN: Are you a big fan of Terrence Malick’s work?

MM: I am! I feel like his films have that feeling that they could be in a gallery setting or they could be in a theater. His films, to me, show what film can be, in relation to art. I mean, he’s not my favorite filmmaker in the world, but the power of what mixing that artistic sensibility with filmmaking can be, and what an experimental narrative can be–all these things that feel like they come from more of an arts background–is what makes me respect and relate to Terrence Malick’s work. Plus, the editors that started working on Ingrid also happened to be Terrence Malick’s editors in Austin. (laughs) The assistant editor was an assistant editor for Malick, and the editor we first worked with was Malick’s editor, which was great.

HtN: So they were all like, “We need more cutaways to bugs!” (laughs)

MM: Totally! (laughs) Yeah, but that being said, we did switch over to an editor that I’ve worked with for a while, in L.A., who was actually the one who brought the whole film together.

HtN: And what’s that editor’s name?

HtN: Speaking of collaborators, I love how the film is shot and I love its sound design. How did you meet up with cinematographer Andrew Hajek, drone operator Will Graham and musicians Alexis & Sam? 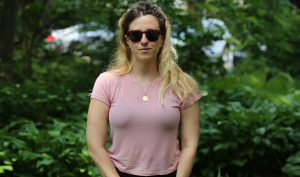 MM: Well, I can start with Alexis & Sam. I’ve worked with them on every single project I have ever done. They’re friends from L.A. Our work has grown together. They now are the composers for Animal Kingdom and a bunch of big films. We remain closely knit and work on each other’s projects. Andrew and Will were … I love the challenge of going to a different city and finding people I mesh with well. Andrew was recommended by a friend in Dallas, who also recommended Will, and it instantly worked.

That was luck, but also a sensibility of knowing what you want and people knowing you and recommending the right people for what your work is. And props to Andrew, who was also able to…a lot of shooting Ingrid we had, not no idea what we were doing, but it was all off-the-cuff, figuring it out, discovering it as we went along, and we really had to trust each other, without really knowing each other, to make that process work.

HtN: Right. For how long did you film?

MM: I filmed Ingrid for about 6 months, first, to kind of get…none of that footage is in the film, but some of the audio is in the film. So, 6 months with me, then with the team it was about 2 years, so probably 2½ years total.

HtN: And then with the post-production, how long was the total process? When you say 2½ years, does that mean the whole thing?

MM: The whole thing was about 3 years. We were editing as we went along, so total was 3 years.

HtN: So, how is Ingrid doing now? Any changes in her life? Have you stayed in touch?

MM: Yes, we’re in touch. I think that the film opened up her life in so many ways. She has one friend, and I’ve heard…

HtN: Is that the guy we see in the film?

MM: The guy we see in the film is her friend out there. She has one friend in Dallas, who invested in the film, giving us the money to shoot it. And I’ve heard from him that she’s just sort of blossomed and is so much happier than normal, because now she feels like her life is worth it. (laughs) I don’t think she would ever admit that to me, but I think this film has done wonders for her personal life and feeling good about herself and her choices in her older age.