A Conversation With Ian Cheney (THE CITY DARK)

Well before kale patches became a yuppie status symbol, documentary filmmaker Ian Cheney and his two partners Aaron Wolf and Curt Ellis decided to move to the Midwest to grow corn while exploring American agriculture. The result was King Corn, a clever documentary that eschews in-your-face alarmism (beef is evil!) for a more open-minded form of storytelling (hmmm, this hamburger is tasty but problematic). In his new film, The City Dark, Cheney expands on this humanist style by looking at the issue of light pollution and the disappearance of the night sky. An amateur astronomer since childhood, Cheney was inspired by his experience transitioning from rural to city life, and noticing the challenges that urban existence poses to connecting with nature (is it possible, or desirable, to stargaze from the crappy roof of your apartment building?). His film alternates interviews with a variety of people, from New York City boy scouts to bird rescuers to astrophysicists, with time-lapse photography and animation of the night sky.

I met up with Ian to talk about The City Dark (which world premiered in competition at the 2011 SXSW Film Festival and also screens at IFFBoston on Friday, April 29th, and Sunday, May 1st, 2011). He shared his thoughts on his first solo effort, from contemplating the vastness of the cosmos to post-production grants.

Hammer to Nail: How did your process of making documentary films evolve between King Corn and this film? 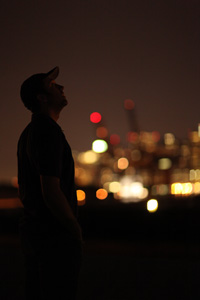 Ian Cheney: Well, with King Corn we started out with this broad vision of making a film about the American food system, but that’s not enough of an idea to merit a film. So as we spent more and more time researching we settled on this idea of corn, and then we settled on this idea of growing one acre of corn. So that project became the driving narrative of the film, this process of growing corn and then following it out into the food system. There was a calendar built into the story and into the film. A timeline is really helpful for documentaries, a film that has no built-in journey or timeline can be really tough to contain or shape. And The City Dark presented some real challenges. I knew I wanted to make a film about the human connection to the stars, and what we lose as a culture, as a people, when we can’t connect with the night sky anymore. And I wrestled for a long time with trying to come up with some kind of journey or construct that could drive things forward and contain those ideas… and ended up feeling like I didn’t want to just construct some artificial journey for myself. So the process of making The City Dark was a process of slowly coming to terms with the fact that the film should reflect an honest sense of the ideas I wanted to explore. This film is my exploration of [certain] questions. And that’s not a particularly sexy thing to say. [He laughs] But in the end that was going to be the best film in the sense that it was the most honest… So my end goal became to act as a guide in the film, not as a main character. It is a personal narrative, but in the end it’s probably less important what happens to me than what I encounter along the way.

H2N: Did you encounter anything particularly surprising in your research?

IC: I had no idea that what was causing the disappearance of the stars—the spread of artificial light—was also causing all of these other problems. Especially human health problems. The idea that we might be at increased risk of developing certain cancers because we’re disrupting our Circadian rhythms, because we’re exposing ourselves to too much light at night, is mind-blowing to me. Even though when you start to think about it, it makes a lot of sense. It’s sobering, but it’s also wonderful from a filmmaking perspective to have learned about that, because it allowed the film to take on some more tangible, measurable, scientific dimensions. For a long time I was struggling with how do you describe what people gain from seeing the night sky? How do you put that into words without sounding like a cheesy bastard? [He laughs]

H2N: It is sort of a poetic premise. 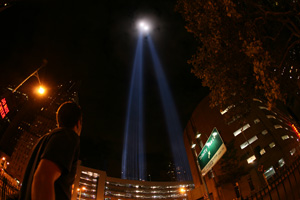 IC: Right. It’s why a lot of the film is visually driven. It’s because it is hard to put it into words if you’re not a poet. Which I’m not. I actually caught myself, when I was in New York City some of the first times, looking for the moon or the North Star to figure out where I was, which direction I was heading. Which is ridiculous, because I could hardly ever find anything. But from having grown up spending so much time looking at the stars I realized they had been kind of a reference for me. I’ve given up doing that, I don’t do that anymore in New York City. I actually tried to play with that idea of orientation a lot in the film, more philosophically. This idea that being connected to the stars helps us orient ourselves in the universe, helps provide a sense of scale and perspective that we otherwise might lose, feeling like we’re the only thing that matters and there isn’t this enormous cosmos surrounding us.

H2N: When you look at your life compared to the span of ages…

IC: Yeah. The flipside of this idea of the stars providing perspective, and allowing us to orient ourselves on the planet, is that it makes us feel really small and insignificant. And that’s I think scary for a lot of people. And understandably so. It’s very interesting to me that the people who know the most about what we don’t know about the universe—astronomers and cosmologists who encounter this yawning expanse most frequently—are the least dismayed by it, the least disturbed by it. It’s been said that [they] are some of the most peace-loving people that there are, because you suddenly realize… how outrageous it is to be squabbling over plots of land on this tiny planet in a galaxy of four hundred billion stars.

H2N: So in a sense there are some political implications?

IC: Potentially. We don’t go into that too deeply in the film, but I hope it’s an undercurrent that’s really there. Because I think it’s a pretty tremendous loss. It’s almost easier to measure what we lose than what we gain. It’s easier to imagine how we might become a more childish species by thinking we’re the center of the universe.

H2N: That concept, that sometimes it’s easier to measure what is lost than what is gained, is not something that drives a lot of documentary films. 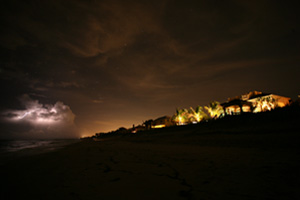 IC: It’s hard to remember when you’re living in a brightly lit city that the stars are up there. If you don’t grow up with any memory of that you’re probably hard-pressed to think to seek it out. One of the reasons I started making this film is because I heard this crazy statistic that for the first time in history the world is now a majority urban population. And I started thinking about this. For all of human history we’ve been mostly a rural species, and now suddenly most kids will grow up without a rural connection to nature. And the stars are part of that. I’m not approaching it as a Luddite, but I am approaching it as somebody who’s very conflicted personally over my love of science fiction, and of futurism, and of the technologies that hold so much promise. I think it’s understandable that we’re infatuated with those things. But also I love hand-written letters, and I love typewriters, and I love the night sky. And how do we grapple with those things going forward? In many ways I wonder whether our generation… I mean, I grew up without email.

H2N: We’re one of the last generations.

IC: Who have both! Because our parents, they don’t really have email, and if they do they just send, like, spam around to each other… [He laughs] We’re this generation that grew up without it, and then has adopted it wholeheartedly, and now we conduct interviews on our iPhones. Are we going to be the last generation that has this memory of walks in the woods or starry skies? How do you get people excited about something like the darkness, or the quiet, when we’re competing with the stuff that’s obviously so much more entertaining than that? Entertaining in that it’s sparkly and bright and makes your brain tingle. But I think that our brains need quiet and darkness and wilderness just as much as we need, or think we need, caffeine and LCD screens.

H2N: Can you talk about the technical side of making the film? It seems like it was more of a solo effort this time.

IC: Definitely, yeah. King Corn I worked with Aaron [Woolf] and Curt [Ellis], and the three of us were all hands on deck at all times for three years. This film I very much made on my own for the most part. I was the only person working on it continuously.

H2N: Did you shoot the film as well? 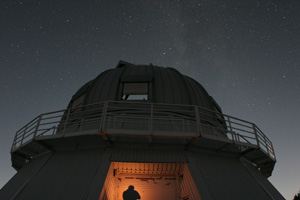 IC: I shot a lot of it. Taylor Gentry was my co-DP, and so he shot a lot of it as well. Often times I couldn’t afford to hire him or fly him along with me so I would just go myself, and shoot and conduct interviews myself, which is ridiculous. But it was fun. At the end of the day it was either that or not shoot the interview, so… At times it was a lonely process, because I didn’t feel like I always had people I could go to who were as committed to seeing the film through as I was. But, you know, that’s probably just what it’s like to be a writer. At the end of the day it’s on your shoulders to really see it through, and that’s scary but that can also be kind of invigorating. I certainly didn’t make the film all by myself. I worked with a number of wonderful people.

H2N: You have a strong design element in both King Corn, with the stop-motion animation, and The City Dark, with the animation and the titles.

IC: It was really important to make the graphics and illustration fit the tone and the style of the film. Sharon Shattuck, who did the animations for the film, was just wonderful. She did all of these hand-drawn constellations that we then scanned in and she animated in After Effects. She did an awesome job of capturing the feel of the film, which was rooted in some ways in my childhood in Maine. I kept notes on all the stars I’ve documented in the night sky, I drew my own constellations. So we wanted that spirit to carry forward in some of the graphics in the film. We then got a grant from Rooftop Films, they coordinate a grant with Edgeworx, which is a post house in the city. It’s a grant to do some titles and graphics work and color correction. And so they took Sharon’s animations and then just kind of sweetened them. It’s fun. I’m pretty excited about what we cooked up. 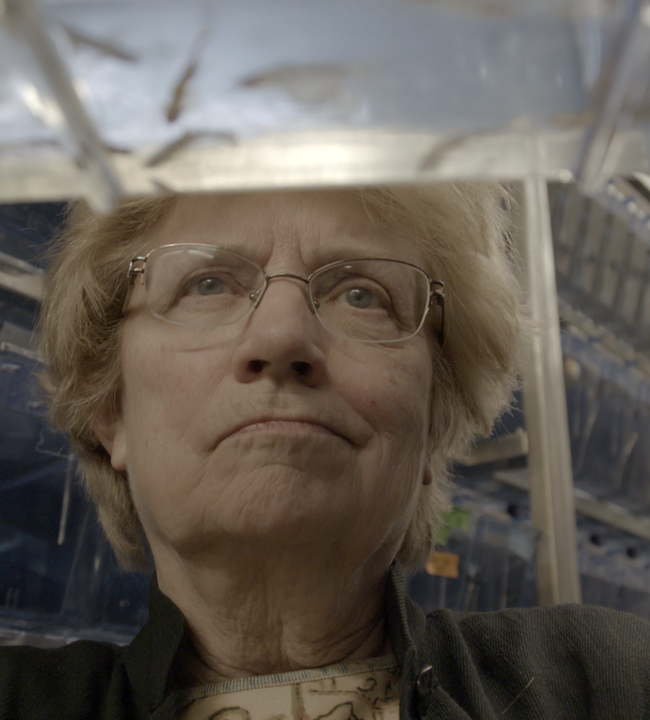