A Conversation with Crystal Moselle (THE WOLFPACK) 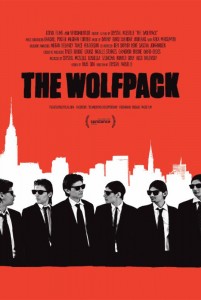 (The Wolfpack premiered in 2015 U.S. Documentary Competition at Sundance. Our own Jackson Scarlett  caught it at the San Francisco International Film Festival.)

I first heard about this year’s Sundance Grand Jury Prize winner, The Wolfpack, from friend who worked on the film as an associate producer and I’m fairly certain I was the last one to know. No film left the festival this year with as much steam as the unlikely story of the Angulo clan, six long-haired brothers who spent most of their lives locked away from the world in a tiny apartment on the Lower East Side. Eamonn Bowles of Magnolia, the distro who snatched it up at after the win, called it right: it’s “a jaw-dropper.” The Wolfpack positively glitters from an abundance of what every documentarian craves–– access. In their restrained way, Bhagavan, Govinda, Narayana, Mukunda, Krisna and Jagadesh Angulo are the perfect subjects thanks to their deep and abiding love for film, and the camera. Reenacting their favorite movies together from scripts they composed by hand, the boys projected themselves into the real world long before they set foot outside their front door–it’s fitting that a film also serves as their announcement to the world.

HTN: Everyone will want to know, of course, how did you find this rare tribe?

CM: I was walking down First Avenue in NYC and these kids dressed up as [the characters of] Reservoir Dogs ran past me and my instinct just took over and I ran after them. I didn’t know why—I know now. At the time I just thought they were interesting, and they were running, and I had to catch up!

HTN: They were running?

CM: They were weaving through the crowd and I just kind of went after them! We met up at a crosswalk and I… It was on 1st avenue and 3rd street and we met up right before Lil’ Frankies. I asked them “Where are you guys from?” and they said “We’re from Delancy Street” and I said “Delancy Street, where?” I was expecting them to be like “We’re from a different planet!” (laughs)

They were sort of a little bit shy and I could tell that they were drawing back, but then Govinda came forward and said “What is it that you do for a living?” 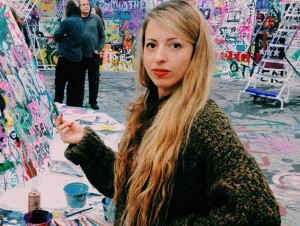 HTN: What a New Yorker!

CM: Yeah. And I said “I’m a filmmaker” and he said [serious voice] “We’re interested in getting into the business of filmmaking.” I said “Ok, I think I can show you some cameras, and we can hang out and talk about movies if you want.” They were very excited. I gave them my phone number and they called me. So we met up and I showed them some cameras in the park, and they did some reenactments in the park and it was awesome.

I saw that they were so fun and I know that they are a homeschooled and my cousins are homeschooled–– I knew they were just raised a little differently. So I was open to exploring what they were up to, and what they’re doing and helping them as well. It was a friendship really. Then it eventually became a feature-length documentary film… and now I’m in San Francisco, talking about it.

HTN: How long did the film take to make?

CM: It took about 4 and a half years.

HTN: That’s a ton of footage! Did it take shape mostly in editing?

CM: The direction that I had thought it was supposed to go in was totally wrong–because I just thought “Oh I’m going to film these kids making a film.” I’m going to film them doing some of these reenactments in their process. It would be like American Movie, you know that documentary?

What I ended up uncovering was totally different: a really deep emotional story about a family that went through something together.

HTN: In a way you’re almost dealing with an autonomous nation, how did you smuggle the cameras in there?

CM: The cameras were a part of our relationship from the very beginning, since that’s where their interests were. I was filming them from the first time we hung out, as friends. It was very easy to get them to open up to the cameras because it was part of this dream of theirs.

HTN: Earlier we were talking and you mentioned that people have been searching for things that weren’t there in your film. On face, there’s a lot of potential for this to be something more sordid, more Capturing the Friedmans. What drew you away from that movie and toward the movie you made here?

CM: I think it was really that I wanted to tell the story the boys wanted to tell, ultimately. I let them reveal what they wanted to reveal. Sometimes people ask me questions like that and I’m like: “That’s not the movie it is, that’s the movie you want it to be!” I don’t think there was anything that necessarily drew me away from anything while making the movie though. There was the process and myself. Here was a story about a family and it wasn’t a story about some crazy thing that happened and trying to investigate, or be a journalist, or be a psychiatrist (laughs). I enjoy really interesting stories, and that’s what I was interested in –– the emotional story ––and they went through this change, so there was a really great transformation. That was my focus, and that’s how the film ended up the way it is.

HTN: All six of the boys seem very ‘Old New York.’ How do you think that happened in the isolated environment they grew up in?

CM: I think maybe, because they weren’t in New York, really, that it has a lot to do with the movies they love. It has to do with them perceiving what a real “New Yorker” would look like through those films. If you step outside in New York today, a lot of the accents are fading away. It really relates to their perception of what a ‘New Yorker’ would be like. That’s just my guess. I really can’t say for sure! 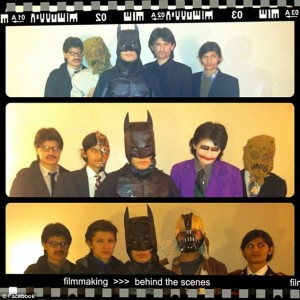 HTN: In the movie we see a big reenactment of Quentin Tarantino’s Reservoir Dogs and some notable bits of some horror flicks. What are the boys’ other favorite films?

CM: They love JFK, they love Lord of the Rings, Godfather. They love anything David Lynch, for sure. Mukunda [the eldest] really loves Terrence Malick. They’re fans of the cinema, in all forms.

HTN: So there are a lot of ‘Wolfpacks’ these days, right? I think while looking up your film I ran into the Twilight ‘Wolf Pack’…

CM: And the wolfpack from The Hangover (laughs). Honestly I think the reason it appealed to me so much was that it was a perfect allegory for the change that was taking place when I was there. It was like there was an alpha, the father, and he had been beaten back by the younger members–– the pack had sort of “changed ownership.”

HTN: Why did you choose to keep their father out of the first half of the film

CM: Because the power struggle had already happened. When they’re talking about their past they’re building their father as how they remember him in the past–– a tyrant. In the present day he’s changed a lot, so I felt like bringing him in earlier we wouldn’t have been able to build the same kind of tension. It was kind of my experience in the film: I didn’t meet him right away. So there was this whole facade, this whole image of who their father was before I met him. We see him in the first part of the movie but it’s all archival footage. We don’t get to hear him speak or see his point of view. I think it’s important to see the kids, and meet them first to see what they feel about him.

HTN: How far into that change were they when you started filming?

CM: It had already happened. When Mukunda went out with the Michael Myers mask on, that was the beginning of that change, and by the time I met them, the power dynamic had already shifted.  I don’t think the story would have been as powerful to me, or the audience, if it was told by their dad.

HTN: It surprised me that their personalities were very different and, in some ways, very actualized. How does this happen in such a hermetic environment?

CM: I think they were different because, firstly, everyone’s sprit is different, but their upbringing is in some ways a microcosm ––a petri dish–– that shows how society erects itself no matter where you are. People take on different roles. I think that they all formed their own roles within that small community. Their father would treat them all differently. The older brothers had to look after the younger ones. It’s like the way a family is formed: the middle one has a different complex, the older ones have a certain complex, the younger ones…

Their parents always pushed them to be individual, and to go after what they were interested in individually. Narayana is more of a bookworm, more into history, a cinephile. Bhagavan is more oriented with his body, and now he’s teaching yoga. Govinda is more like a tech nerd–– he’s the one that just shot his own feature film as a DP. They’re all different people by nature, and that’s how within this household they all grew up and had their own individual voices.

HTN: It’s almost lucky that they had so many siblings since they were confined so strictly.

CM: Oh yeah. I also think that’s another reason why they were confined. Since it was hard for them [the parents] to manage that many kids, it was easiest for them (the parents) to control them by having them stay in the house. That was one of their father’s excuses: “There are so many, they can play with each other.”

In a way they had already escaped their confinement and were living in their fantasy world, so it was just the outside reality that had to catch up to where they already were. Speaking to their ability to endure the ordeal of being locked away in that way, I’d heard that children who invent fantasies to deal with abuse are ultimately the ones that survive it–– without going insane.

HTN: Did going through this with the boys inform any thoughts you may have had ––or not had–– about your own kids?

CM: I wasn’t even really interested in having kids before I met them. That changed my point of view. One thing their mom and mine had in common was that they really helped us by inspiring us to be creative. I certainly wouldn’t keep them in the house though!