From the pebbly shores of the beaches at popular Lincoln Park in West Seattle you can see Vashon Island floating off in the distance, cool, serene. Chill. Even from across the water, Vashon Island gives off a vibe. It’s deliberately not the easiest place to get to; the long ferry lines that stretch all along Fauntleroy during busy times attest to the patience it takes to leave “here” behind and get away to “there.”  On warm, hazy August days, Vashon Island hovers mysteriously in the not-too-distant distance, a world apart from West Seattle’s busy beaches.

Like other island communities in the Puget Sound area near Seattle, Vashon Island has many artists and creative energy; the two-month long Vashon Summer Arts Fest, featuring the work of over 100 Vashon Island artists, draws art lovers to the island all summer long and now, with the advent of the inaugural Vashon Island Film Festival, Vashon locals and visitors from around the Sound will get to enjoy fest parties and a solid lineup of films from the festival circuit in 2022.

Founded by local—and international—film producer and island resident Mark Mathias Sayre, “The Vashon Film Institute was originally founded to host a summer film intensive for youth, including scholarships for students who might not otherwise afford to attend,” he explains. “We’d originally hoped to create a community event that also supported the youth program, and this is how the Vashon Island Film Festival was born. However, our goal posts have shifted slightly for our inaugural year: 100% of the net profits will go to the family-operated Vashon Theatre, a cultural landmark built in 1947 which, like many other theatres in a post-pandemic world, has struggled to keep their doors open. We still plan to institute the youth program in 2023, but plan to finance that primarily through grants and donations.”

VIFF will screen 10 esteemed features (eight narratives and two documentaries) from the festival circuit, plus a shorts program featuring fest favorites from six countries – curated by Sayre and the VFI programming team. “Programming the festival ourselves offered us the advantage of quality control; we sought out a handful of varied and exceptional films that have resonated with audiences on the festival circuit. As such, we have some of the best performing films on the circuit this year, including the features that won SXSW and Tribeca, so in many ways this is a festival showcasing 2022’s crème de la crème.”

“We’ve got coming-of-age stories, a civil war epic, a 1950’s creature feature throwback, pandemic comedies, and a character study about grief, to name a few,” Sayre continues. “I think there’s something for everyone in this year’s program.” You can check out the full VIFF slate here.

VIFF will also present two seminars/lectures by industry professionals, “From Script to Screen: The Evolution of an Edit,” featuring Vashon Island director Anthony O’Brien, and “An Introduction to the Motion Picture Industry,” presented by fest founder Sayre. “As we meet our goals at VIFF, we hope to expand the ancillary events offered during future festivals,” says Sayre. “In addition to celebrating independent cinema, we hope VIFF can also educate and empower. The best-case scenario is that our program helps motivate the creation of more art.”

Other fest-related activities include VIFF’s Opening Night Gala, where badge holders can mix and mingle with filmmakers, and the Saturday Night Soiree, which will feature live music, street food, and a beer/wine garden.  I guess I better pack my dressy yoga pants and metallic silver flip-flops! I’ve covered and supported many smaller fests like this over 15 years of working the film festival circuit, reviewing films and sharing fest dispatches, as well as through programming for fests. Smaller regional fests like this can really be remarkably transformative, growing new community around film, introducing local audiences to award-winning films and the filmmakers who make them, and creating educational and networking opportunities that can have a tremendous cultural impact. 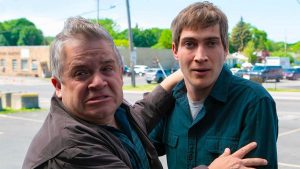 A still from I LOVE MY DAD

I’ll be ferrying out to Vashon Island for a few days to check out the fledgling fest, and I’m looking forward to experiencing this little gem of a community, watching some great films, and enjoying the chill island film-festival-weekend vibe. I’m especially looking forward to seeing Wes Schlagenhauf is Dying, I Love My Dad,  1-800-Hot-Nite, and the documentary Buffalo Soldiers: Fighting on Two Fronts. On the shorts side of things, I’m particularly interested in the Ukrainian film Goodbye Golovin, Punch-Drunk from the UK, The Vandal (USA, exec produced by Darren Aronofsky) and 2002 (Year of the Horse) out of Norway. Generally when I watch shorts I’m watching them to screen for a festival, which means you have to watch an awful lot of not-so-great shorts to get to the good stuff. So really looking forward to enjoying a slate of thoughtfully curated films in the shorts programs.

I’ll be writing a couple of diaries from the fest and taking a lot of pictures to capture the scene there, so come back for more on the Vashon Island Film Festival throughout this weekend, August 12-14.

Vashon Island Film Festival takes place August 12-14. All screenings are scheduled to take place in person. Want to pop out to Vashon Island yourself and check this fest out? Ticketing Options Available Here

Founded by veteran independent film producer Mark Mathias Sayre, the Vashon Film Institute is dedicated to fostering independent filmmaking in the Pacific Northwest, including the launch of two unique programs: the Vashon Island Film Festival and Vashon Scholars, a multi-week summer film intensive education program it plans to host for youth on the island starting in 2023. Its Board of Directors presently includes three individuals with island roots: Maura Little, Isaac Mann, and Peter Serko.