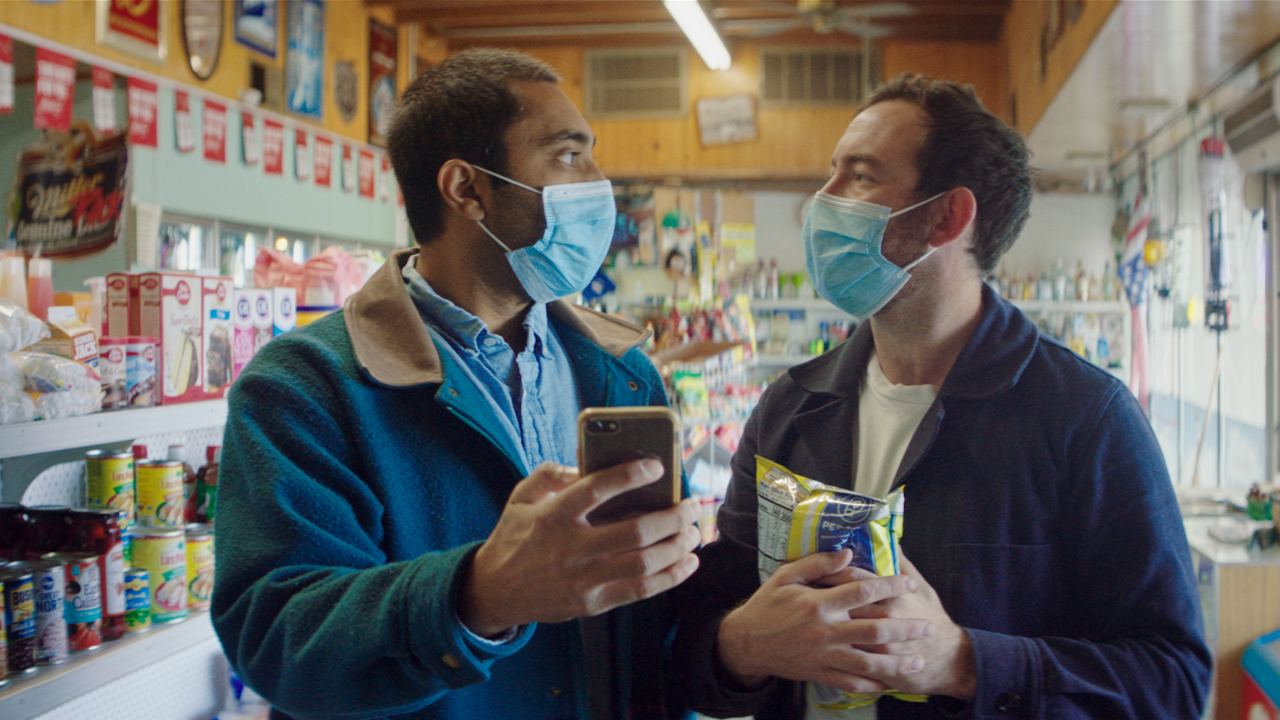 (The 2022 Tribeca Film Festival runs June 9-26 both online and in-person. Check out M.J. O’Toole’s movie review for Wes Schlagenhauf Is Dying. Seen it? Join the conversation with HtN on our Letterboxd Page.)

The great documentary filmmaker Frederick Wiseman once said, “Not all minds are the same. Every aspect of filmmaking requires choice…” In the new comedy Wes Schlagenhauf Is Dying, two friends who set out to make their first documentary in COVID-stricken America are faced with conflicting mindsets and filmmaking choices. With Parker Seaman directing from a script he co-wrote with Devin Das, the duo plays fictional versions of themselves with comical candor and chemistry as two struggling filmmakers who take advantage of an estranged friend’s COVID diagnosis to film a documentary they hope will land them Hollywood success. In this day in age where pandemic-themed movies are on the rise, this particular story is more lighthearted with plenty of waggish banter and eye-rolling shenanigans. What results is a compassionate comedy of errors that is never exploitative and may inspire you to reach out to your own best buddies.

The film opens up with a montage of the trio of longtime friends Dev, Parker, and the titular Wes Schlagenhauf (all playing themselves) making various YouTube parody videos throughout the years. This would launch directing duo Dev and Parker into a lucrative career shooting commercials in Los Angeles. The trio’s friendship takes a turn when the high-strung Wes, who they hire to act in one of their commercials, has an on-set meltdown and leaves both the industry and L.A. on the spot, to his buddies’ bemusement. Flash forward three years later to 2020 when the world is living through COVID-19 lockdown, Wes reaches out to his pals for the first time since their spat to tell them he tested positive and thinks he’s dying. Rather than panic or express concern over their estranged friend’s diagnosis, Parker and Dev brush off his worries and instead take turns roasting him as if the last three years never went by. “Was it really worth it to see Tenet in theaters?” Dev facetiously asks Wes. Through thick and thin, these guys still get each other. It’s honestly refreshing to see urgency and trauma replaced with self-deprecating comedy and clever wordplay.

Parker and Dev decide to cheer Wes up with a videogram from the one and only Mark Duplass. When they ask him for filmmaking advice, Duplass says in his message to make the kind of movie that you’d want to see. “There is a story that only you are uniquely qualified to tell,” he says. This gives Parker the idea for him and Dev to go on the road and make a documentary about them visiting Wes in his hometown of Boise. Despite the reservations of their straightforward agent (D’Arcy Carden) who stresses the possible problematic nature of their feature debut, they manage to get funding from a sneakers company for which they had shot a pandemic-themed ad. Armed with some Craiglist-bought props to make their documentary more “cinematic,” (vintage maps and a Little Miss Sunshine-inspired van) and a copy of Save The Cat which Parker uses to help give the film more narrative structure, the pair hit the road.

In Wes Schlagenhauf Is Dying, Seaman and Das aren’t afraid of poking fun at their own filmmaking struggles and shortcomings. Even as they go further on their road trip, we begin to see contrasts between these two friends, the big one being how Parker wants to make more “meaningful” and un-branded projects, while Dev is more inclined to take on any well-paying gig. This is shown when Dev is offered a chance to direct a commercial with Shaquille O’Neill, without bringing Parker into the fold for fear he’ll micromanage everything. As the duo reaches their destination (both location and story-wise), they are confronted with the prospect of how really less supportive they have been of Wes as friends, as well as each of their own self-absorption. Seaman and Das are able to use these factors to correlate with their artistic and professional collaboration flaws in the making of the documentary.

At this point, it becomes clearer that Wes Schlagenhauf Is Dying is more about friends coming to terms with their own narcissism than the pandemic itself. But overall, it doesn’t deprive the film of its jocular atmosphere and tenderheartedness. It also comes with its memorable moments, including a cool fast-food montage across rural America. A cameo by the always delightful Aparna Nancherla as a commercial actor helps add to the film’s laugh-out-loud bluntness. Seaman and Das have made a feel-good buddy comedy that never tries to make itself self-important, and ends up having you believe in the power of friendship. Whether they disagree on what shots to get or squabble over the other’s Disney Plus password, Parker and Dev have got each other’s backs. Audiences are in for a short but hilarious and very gratifying road trip.