(Goodnight Mommy is the writing/directing debut of Austrian filmmakers Severin Fiala and Vernoica Franz. It was featured in the 2015 New Directors/New Films series at the Film Society Lincoln Center

I’ve always been a real sucker for evil kids in horror movies. While that kind of twisted passion for something so creepy and wrong has subsided a bit since becoming a parent myself (I just cannot bear to see kids get hurt in films any longer), it’s also taken on a new slant as no parent wants their kid to be evil. At least, I hope not. While I used to watch something like, “The Omen” or “Pet Semetary” and be like, “man, that would suck to have a kid stalking you and have to potentially kill him” now I look at it as a parent and wonder what the hell I’d do if my kid was taken over by an evil demon. It’s a weird place to go in one’s mind to say the least and it hits harder than it did before I had a personal stake in these types of films. Austrian filmmakers Severin Fiala and Vernoica Franz have partnered to write and direct Goodnight Mommy, a disquieting new entry into the evil kid horror film sub-genre but they’ve done so in a more clever way other similar films. That being, we the viewer is never really sure who’s the evil one, the mother or the kids. 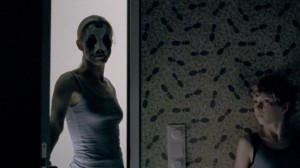 The plot of Goodnight Mommy is pretty basic. Two twin boys (Elias and Lukas Schwarz) from a seemingly well-to-do family await the return of their mother (Susanne Wuest) from the hospital. When she arrives, her face is heavily bandaged due to some kind of surgery that is never fully explained. It is mentioned that there was an accident and as a result the mother may have needed reconstructive surgery. She demands complete and total quiet and lays down some other ground rules that the boys don’t like and soon they begin believe she’s really their mother at all and is an impostor. At first they’re scared because not only do they not know where their mother is, they also don’t know who this woman proclaiming to be her is either but soon they get aggressive in their search for truth. What follows is a dark and somewhat plot-holed film wherein the boys try and drag the truth out about about this woman who is saying she’s their mom.

Using visual cinematic language that will remind one of Terrence Malick (I see fields blowing in a breeze, I think Malick) mixed with the kind of cold detachment of a Kubrick or better, a Jonathan Glazer, Fiala and Franz have also positioned themselves in the thematic realm of fellow Austrian Michael Haneke. Not so much in terms of audience provocation but more having to do with estrangement and sudden, horrific violence. The film also adds a level of chilly distance by having no music whatsoever throughout. It’s a smart choice that really makes one face the “facts” of what’s happening onscreen without the audio cues that can manipulate ones emotions. In fact very few clues are given as to what we should think about what’s happening and therefore we have no idea who to believe onscreen until the very end which features a pretty damned surprising payoff. 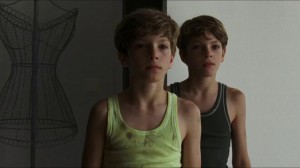 Goodnight Mommy is a well done, arty family drama mixed with a horror film. Throughout the proceedings Fiala and Franz sprinkle in just plain weird scenes that, when they happen, seem to not make sense. Yet by the time the story is wrapped up it becomes easier to look back slowly and see the circuitous route the film takes in terms of delivering information visually. While at times a bit slow once it gets going the film slowly becomes more terrifying and cringe inducing.