There are things in this world more problematic and scary than being haunted by ghosts. One of those things is realizing you accidentally hired an unhinged person to provide a home service for you. Another Evil, a character-driven horror comedy written and directed by Carson Mell (writer for HBO’s Silicon Valley, Eastbound & Down), has ghosts in it, but they mostly exist to set events in motion. The real meat of the film involves the man who has dedicated his life to exterminating them. Even in a universe in which ghosts unequivocally exist, it takes a special brand of nutcase to choose a career in ghost hunting.

When the Papadakis family learns they are sharing their vacation home with a pair of ghosts, they seek help from Joey Lee (underrated character actor, Dan Bakkedal); a laissez-faire ghost expert who arrives dressed in yoga pants and armed with little more than a smudge stick. He tells them the spirits are harmless – the victims of a sort of dimensional leak – and it would be a “dick move” to kick them out. Harmless though they may be, they are rather horrifying in appearance. Dan (Steve Zissis – HBO’s Togetherness, the Duplassverse), the family’s Patriarch, frequently stays at the cabin alone to paint. So he decides to get a second opinion to validate what he has already decided. These ghosts must go.

A recommendation leads him to a hardcore ghost hunter named Os (Mark Proksch – TV’s Better Call Saul, The Office), who contradicts Joey Lee’s assessment. These aren’t friendly Caspars they’re dealing with, but rather demons that must be destroyed. Dan goes ahead with the exorcism, against the wishes of his wife (Jennifer Irwin – TV’s The Goldbergs, Eastbound & Down). Os tells Dan that it’s “going to take a couple days at least”, so the two men hunker down for a long weekend of drinking, swapping stories, and ghost busting. 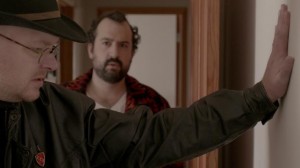 At first, Dan regards Os with a mixture of morbid curiosity and pity. Os dresses like a goth Indiana Jones and exposes raw nerves caused by a recent separation from his wife (Os claims the final straw was adopting one too many cats, but one gets the impression this was not their only issue). Os confidently darts from room to room, setting up traps, taking “readings” of ghostly energy, and occasionally hammering into walls. With an ever-present drink in his hand, and an over-share always at the ready, Os’ ghost hunting frequently bares a striking resemblance to “hanging out.” Despite some actual productivity, he eventually wears out his welcome.

The plot lends itself to the micro-budget. A man like Os would absolutely utilize a trunk full of low-tech, DIY ghost battling devices. Most of the humor comes from matter-of-fact delivery of lines about the supernatural. In the film’s universe, ghost infestations are just another peril of home ownership. It’s the contractor you have to worry about.

Once Dan realizes that Os is the more problematic invader, the film ditches the levity in favor of straightforward horror. At this point, you truly don’t know what to expect. It’s an abrupt change in tone, but it works because it’s abrupt for Dan too. One minute, he is placating this strange, overbearing service provider, and the next he fears for his safety.

Proksch’s performance is note-perfect, sneakily morphing from buffoon to real threat before you know it. Zissis plays his Everyman with perhaps a little more insecurity than the average bear, making him initially sympathetic to and receptive of Os’ cries for help. It’s a testament to the writing and acting talent that these two characters, often doing little more than having a conversation, make for a compelling, and effectively creepy narrative. While not a perfect film, with Another Evil, Carson Mell delivers something clever and unique enough to stand out from the diluted pool of stories about haunted houses.