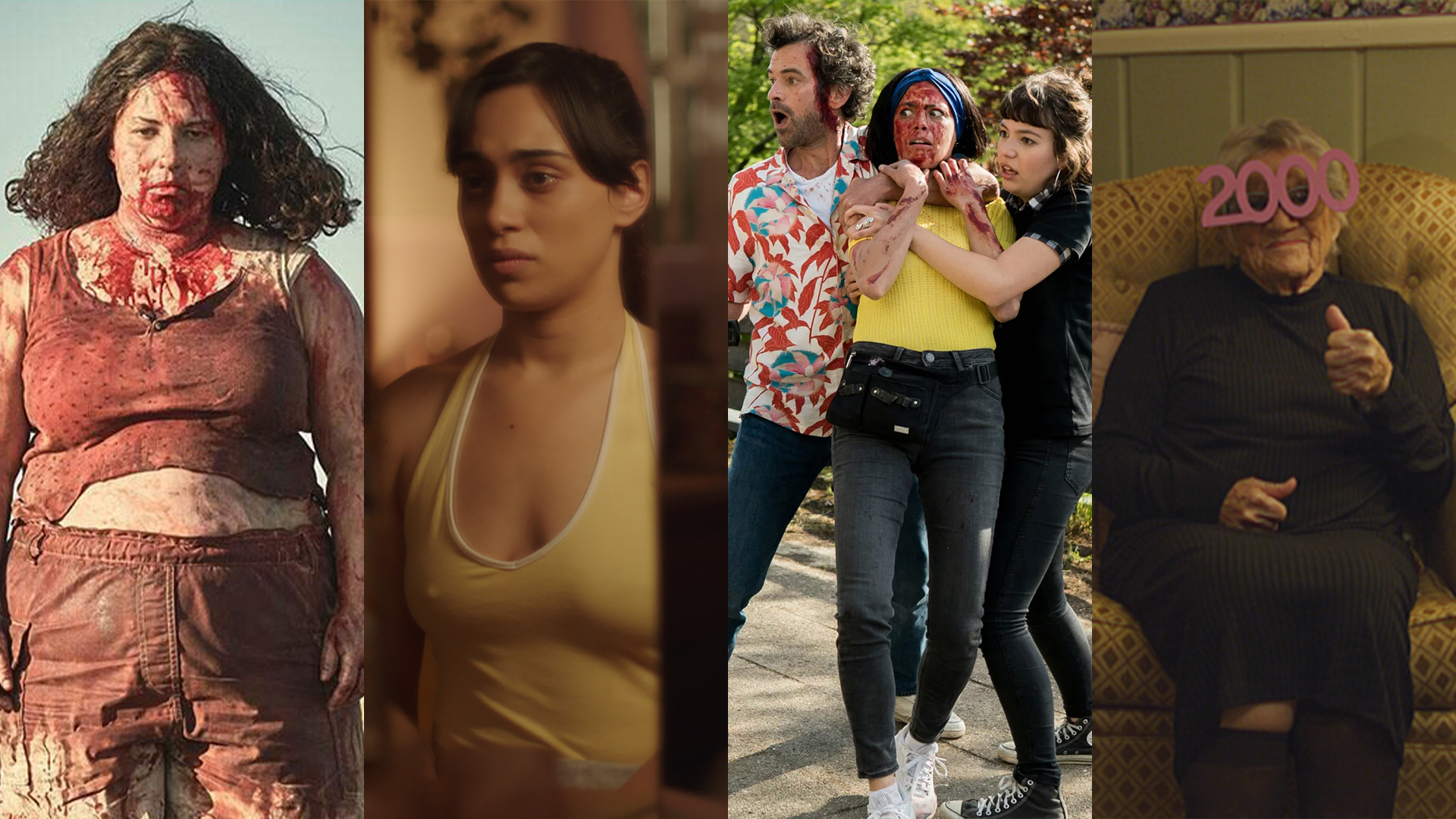 The Fantastic Fest will be making its in-person return for the 2022 edition. The Austin-set festival will be (mainly) screening a variety of horror films from all over the world. It is scheduled to run from September 22 – 29 at the Alamo Drafthouse South Lamar, followed by a virtual edition from September 29-October 4.

Aside from numerous world premieres of exciting new, bizarre films, Fantastic Fest will also be screening numerous festival favorites that have premiered at Cannes, Sundance, and soon TIFF. Such examples are the Palme d’Or winner Triangle of Sadness, Martin McDonagh’s The Banshees of Inisherin, Huesera which won Best New Narrative Filmmaker at the Tribeca Film Festival, and Luca Guadagnino’s ’80s cannibal romance Bones and All. The directors of many of these films are expected to be in attendance.

The U.S. premiere of Park Chan-wook’s Decision to Leave will also be held, and the director will be in attendance to accept a life achievement award for his body of work which includes, Oldboy, Sympathy For Lady Vengeance, Thirst, and The Handmaiden.

“It’s been far too long since we’ve all been able to gather together and celebrate film the Fantastic Fest way,” says Festival Director Lisa Dreyer. “We’ve really put our all into crafting an extraordinary week, from the exceptional programming that spans exciting discoveries to highly-anticipated features, to our signature events that will inject a much-needed dose of fun into 2022.”

Badges for the festival are now on sale. Individual tickets go on sale at a later date.

See the full lineup below.

“12 Days of Terror”
USA, 2004
Retrospective, 95 min
Director – Jack Sholder
In attendance – Director Jack Sholder
During the record-breaking summer heat of 1916, beachgoers on the Jersey shore are threatened by a shark that has developed a taste for human flesh.

“All Jacked Up and Full of Worms” (Burnt Ends Selection)
USA, 2022
Texas Premiere, 72 min
Director – Alex Phillips
In attendance – Director Alex Phillips
A psychedelic journey of self-discovery leads to romance when a man shares his addiction to psychotropic worms… and Chicago will never be the same.

“The Antares Paradox”
Spain, 2022
World Premiere, 96 min
Director – Luis Tinoco Pineda
In attendance – Director Luis Tinoco Pineda
An astrophysicist working for the SETI project risks her career and family to verify an extraterrestrial radio signal before her access is cut off.

“The Banshees of Inisherin”
UK/Ireland, USA, 2022
US Premiere, 114 min
Director – Martin McDonagh
In attendance – Director Martin McDonagh
Two lifelong friends find themselves at an impasse when one abruptly ends their relationship, with alarming consequences for both of them.

“Birdemic 3: Sea Eagle”
USA, 2022
World Premiere, 83 min
Director – James Nguyen
In attendance – Director James Nguyen
The birds are back, and global warming has them roiled! James Nguyen returns with the director’s cut of his thrilling, romantic, and worthy sequel.

“Blood Relatives”
USA, 2022
World Premiere, 88 min
Director – Noah Segan
In attendance – Director Noah Segan
A nomadic recluse living on the fringes of society reconsiders his bloodthirsty legacy when a teenage girl shows up claiming to be his daughter.

“Bones and All”
USA, 2022
Texas Premiere, 129 min
Director – Luca Guadagnino
In attendance – Director Luca Guadagnino
A story of first love between Maren, a young woman learning how to survive on the margins of society, and Lee, an intense and disenfranchised drifter; a liberating road odyssey of two young people coming into their own, searching for identity and chasing beauty in a perilous world that cannot abide who they are.

“Deep Fear”
France, 2022
North American Premiere, 80 min
Director – Grégory Beghin
Three friends are caught between a skinhead gang and an otherworldly enemy after discovering a forgotten secret in the depths of the Paris Catacombs.

“Disappear Completely”
Mexico, 2022
World Premiere, TBD min
Director – Luis Javier Henaine
After sneaking onto a crime scene to snap pictures of a corpse, an ambitious photographer stumbles into a curse that takes away his senses one by one.

“The Elderly”
Spain, 2022
US Premiere, 95 min
Directors – Raul Cerezo & Fernando Gonzalez Gomez
An octogenarian starts behaving weirdly in the wake of his wife’s sudden suicide as he prepares for events leading up to a mysterious apocalypse.

“The Five Devils”
France, 2022
North American Premiere, 103 min
Director – Léa Mysius
A young girl’s ability to smell and reproduce any scent transports her into her family’s troubled past in this gorgeous, magical realist drama.

“Garcia!”
Spain, 2022
World Premiere of 1st 2 Episodes, 114 min
Director – Eugenio Mira
In attendance – Director Eugenio Mira
On the hunt for a scoop that could secure her a job, a journalist intern inadvertently awakens a superhuman agent created by Franco’s regime.

“H4Z4RD”
Belgium, 2022
North American Premiere, 86 min
Director – Jonas Govaerts
When Noah Hazard volunteers to drive his beloved gold Lexus to help his jailbird cousin pick up a friend from prison, he doesn’t expect to be drawn into a murderous drug war.

“King on Screen”
France, USA, 2022
World Premiere, 105 min
Director – Daphné Baiwir
In attendance – Director Daphné Baiwir
A documentary exploration of the many screen adaptations of the work of Stephen King, with commentary from the filmmakers he’s influenced the most.

“Living with Chucky”
USA, 2022
Texas Premiere, 102 min
Director – Kyra Gardner
In attendance – Director Kyra Gardner
The daughter of one of Chucky’s puppeteers examines the family relationships that contributed to the success of the queer camp classic “Child’s Play.”

“The Menu”
USA, 2022
US Premiere, 107 min
Director – Mark Mylod
In attendance – Director Mark Mylod
A couple (Anya Taylor-Joy and Nicholas Hoult) travels to a coastal island to eat at an exclusive restaurant where the chef (Ralph Fiennes) has prepared a lavish menu, with some shocking surprises.

“Missing”
Japan, 2021
US Premiere, 124 min
Director – Shinzô Katayama
A distraught daughter searches for her widower father, after he disappears while trying to collect the reward for capturing an unknown serial killer.

“Nightsiren”
Slovakia, Czech Republic, 2022
US Premiere, 109 min
Director – Tereza Nvotová
Šarlota returns home decades after losing her sister in an accident, only to be faced by the brutal village patriarchy and accusations of witchcraft.

“The Offering”
USA, 2022
US Premiere, 93 min
Director – Oliver Park
In attendance – Director Oliver Park
A desperate man defends his unborn child from an ancient demon brought into their family-owned, Hasidic funeral home inside a mysterious corpse.

“Oink”
The Netherlands, 2022
Texas Premiere, 70 min
Director – Mascha Halberstad
A young girl suspects that her estranged butcher grandfather has sinister plans for the adorable piglet he has given her as a birthday gift.

“One and Four”
China, 2021
Texas Premiere, 88 min
Director – Jigme Trinley
A Tibetan forest ranger must deduce who among the three visitors seeking refuge in his cabin from a coming blizzard are poachers and who are cops.

“Piggy”
Spain, 2022
Texas Premiere, 90 min
Director – Carlota Pereda
In attendance – Director Carlota Pereda
When a bullied girl’s tormentors are kidnapped, she faces the ultimate moral test: Does she help or allow them to suffer as payback?

“Sick”
USA, 2022
US Premiere, 82 min
Director – John Hyams
As the pandemic steadily brings the world to a halt, Parker and her best friend Miri decide to quarantine at the family lake house alone – or so they think. Directed by John Hyams (ALONE), written by Kevin Williamson (SCREAM, I KNOW WHAT YOU DID LAST SUMMER) and Katelyn Crabb (SICK) and starring Gideon Adlon (BLOCKERS, THE CRAFT: LEGACY), Bethlehem Million (AND JUST LIKE THAT), Marc Menchaca (THE OUTSIDER, OZARK), and Jane Adams (TWIN PEAKS, POLTERGEIST, HACKS).

“Sick of Myself”
Norway, Sweden, 2022
US Premiere, 95 min
Director – Kristoffer Borgli
Fueled by a need for attention, Signe plays a perverse game of one-upmanship with her boyfriend, popping a drug that causes a painful skin condition.

“The Strange Case of Jacky Caillou”
France, 2022
North American Premiere, 92 min
Director – Lucas Delangle
Jacky has his grandmother’s gift of healing, but when a woman turns up on his doorstep with an unusual problem, he must decide how far he’ll go for love.

“Swallowed”
USA, 2022
Texas Premiere, 94 min
Director – Carter Smith
In attendance – Director Carter Smith and Actor Mark Patton
Forced to mule drugs on their crossing of the southern US border, two friends realize that the packages they ingested seem to be alive.

“Unicorn Wars”
Spain, France, 2022
US Premiere, 92 min
Director – Alberto Vázquez
After a bloody defeat in their apocalyptic war against the Unicorns, the Teddy Bear army launches a desperate attack in the heart of the magic forest.

“Venus”
Spain, 2022
US Premiere, 100 min
Director – Jaume Balagueró
In attendance – Director Jaume Balagueró
Injured in an attempt to steal from her boss, Lucía hides with her sister, unaware that something’s very wrong with the rundown building’s residents.

“The Visitor From the Future”
France, 2022
North American Premiere, 102 min
Director – François Descraques
A snarky time traveler from the year 2555 arrives to save the world from ecological disaster by attempting to assassinate a climate activist’s father.

“We Might as Well Be Dead”
Germany, Romania, 2022
Texas Premiere, 93 min
Director – Natalia Sinelnikova
When a dog disappears from a secluded high-rise building, fear spreads among the residents, threatening to turn their utopia into Absurdistan.