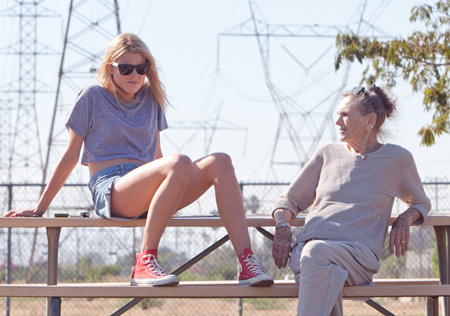 Starlet (Music Box Films) — ***Hammer to Nail’s Number 5 Film of 2012!*** Though Starlet couldn’t be more different than Sean Baker’s recent micro-budget gems Take Out and Prince of Broadway, it once again proves that he’s one of independent cinema’s shining lights. This California-set tale feels like several movies in one, yet Baker somehow manages to unify them. A beautiful 20-something girl, Jane (a knockout performance by Dree Hemingway), forms an unlikely bond with an 80-something woman, Sadie (outstanding first-timer Besedka Johnson). When Jane’s not easing her way into Sadie’s life with her adorable doggie Starlet, she makes money by working in the adult film industry. Here is where Baker’s commitment to authenticity takes the film to an unexpectedly frank level. Shot digitally with vintage Lomo lenses, Starlet has a timeless cinematic richness that puts most low-budget indies to shame. And though it does indeed “go there,” it is as sweet-natured a film as you could hope to encounter. To compare it to Driving Miss Daisy might sound like an insult, but Starlet has an accessibility and warmth that cannot be denied. Read A Conversation With Sean Baker and Dree Hemingway. Available on DVD

Upstream Color (ERBP) — Shane Carruth’s follow-up to Primer is an extraordinary sensory experience. Its texture is slippery and dreamlike: shimmering, shallow-focus, artfully opaque images; a lyrical, free-associative editing style that skips around in time and space and renders events as half-glimpsed, fleeting impressions; a soundtrack of unearthly electronic hums and throbs. After watching it twice, I’m still baffled by significant portions of the story, but perhaps cracking its narrative code is less important than letting its waves of image and sound wash over you, and opening yourself up to the way certain moments resonate as potent metaphors for familiar emotions and experiences. Read Nelson Kim’s Upstream Color: A Review And Interview. Available on DVD