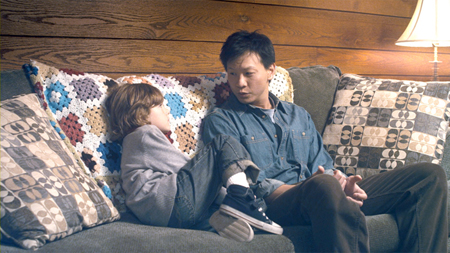 In The Family (In The Family, LLC) — Winner of our 2011 Golden Hammer Award for his staggeringly assured directorial debut—which he also wrote and stars in—Patrick Wang is finally releasing In The Family on home video. We really hope that a DVD/Blu-ray release will help this grand American drama reach even more viewers, for it is a truly special gift that Wang has given all of us. Read Dave Boyle’s HTN review, as well as A Conversation With Patrick Wang, then do yourself a big, big favor and track down this movie. Available on DVD

No (Sony) — As with Tony Manero and Post Mortem, Pablo Larrain employs a radically distinct style for the final installment in his totally awesome “Chile under Pinochet” trilogy. This time, he focuses on the end of that dictatorial era, when a group of upstarts rise to the occasion in 1988 and turn a sham of a Presidential campaign into a history-making event. If it weren’t for the familiar faces of Gael Garcia Bernal and Larrain regular Alfredo Castro, this camcorder-shot docudramedy might pass as an actual artifact from the time in which it is set. Available on DVD

The Rambler (Anchor Bay) — Even for those of us who have never served time, it’s easy to imagine how difficult it must be to acclimate to life on the outside after having spent a solid amount of time in the pokey. A return to “normal life” must be anything but that. In the case of Calvin Lee Reeder’s The Rambler, it’s something slightly more extreme. It’s a trip-and-tooth-shattering-face-plant into a batshit gonzo nightmare from hell. Read my full HTN review. Available on DVD

, and at Amazon Instant.

The Source Family (Drag City) — Jodi Wille and Maria Demopolous’s documentary is a fantastic insider’s look into a common American phenomenon: the free love alternative utopian society. What is perhaps most remarkable is that this particular cult lasted as long as it did and that the ex-members still seem to be as supportive of their leader Father Yod’s vision now as they were when he was still alive. Read Mike S. Ryan’s HTN review. Available on DVD

Keep Your Right Up (Olive Films) — Available on DVD

The Call (Sony) — Available on DVD

As Luck Would Have It (MPI Home Video) — Available on DVD

A Place At The Table (Magnolia) — Available on DVD