Spotlight on VR at the 19th Savannah Film Festival

(Like many film festivals of late, the 2016 Savannah Film Festival has added a Virtual Reality component to their programming. Lauren Wissot was there and offers a brief glimpse at the presentations.)

One of the highlights of this year’s Savannah Film Festival – an event founded and hosted by the Savannah College of Art and Design (SCAD), that takes place in one of the most historic and charming parts of the Deep South – was also the most unexpected. The eclectically curated VR Showcase (SCAD has a relationship with Oculus Rift) featured six projects – including Ollie Chen and Lubo Kocka’s Say It With Music, a VR musical developed by SCAD students and alumni from 14 departments – that had overflow crowds eagerly signed up for the waiting list every day. (Which made me think that something like an eight-hour, open door, daily “arcade” staffed with volunteers might have worked a bit better than the time-slot setup.)

Easier to get a seat for – though still packed with enthusiastic university students – was the Storytelling in VR: Changing the Frame panel at the Gutstein Gallery, just across the street from the beautifully restored, 70-year-old Trustees Theatre, the fest’s main venue. Among the participants were the makers of Defrost (a futuristic narrative about a woman who awakes from her cryogenic state after 30 years), The Artist of Skid Row (a look at a Skid Row denizen who finds salvation in painting, photography, sculpting, and poetry), Invasion! (in which two fluffy bunnies take on aliens intent on conquering Earth), and The Visitor (a metaphysical drama in which a couple awaits the arrival of the female half’s greatest fear). Instead of going into specifics about each individual project, though, the moderator refreshingly focused on the bigger picture of virtual reality itself – which made for one fascinating conversation. 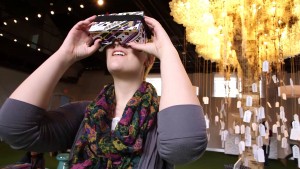 For example, bringing up the potential for empathy in this emerging medium prompted the panel to discuss the fact that though VR is a solitary experience, it nevertheless possesses the ability to connect with the participant on an emotional level. Director James Kaelan, who created The Visitor, also noted that the generation born now are not even   going to grow up expecting mediated (i.e., auteur) experiences. Whereas today’s VR makers have to “forget” cinematic rules as much as they have to invent new ones suited to the format.

Delving into the challenges of working in VR versus traditional film, the panel agreed that the stitching process prior to editing is more work than simply editing – though manipulation in post is not something to be taken lightly in the new medium. As Kaelan also pointed out, while there’s the slow zoom in film, VR has the unique ability to affect the inner ear and actually make viewers nauseous! (Perhaps my only VR pet peeve.)

As the panel wrapped up I realized that, love it or hate it, virtual reality is now firmly part of the future of cinema – and thus a darn smart focus for a festival hosted by an arts college. Which made it all the more frustrating that I had to leave town before the Virtual Virtue: Technology and Ethics Converging in VR talk. Here’s to a cutting edge, 20th edition.