This is the story of Clark (Ben Crutcher), the most unlikely of superheroes with the most unexpected, and arguably most inane, super power. What makes Clark such an overwhelmingly poor choice for superhero status? For one, Clark complements his lazy slacker persona with a heavy dose of insufferable asshole. He’s the type of guy who, when his best friend and roommate, Dale (Winston Carter), offers to let him slide on his monthly bills until he can get his life back together after getting fired, bristles at the idea unless Dale promises not to hassle him about the debt until well after Clark has made his life comfortable again. Clark’s the kind of asshole who delivers your pizza with slices missing, then expects you to pay more for it. He’s the type of prick who’ll save your life… if you pay him.

And what are his lame super powers? He can shoot clumps of spaghetti from his body. Clumps of spaghetti powerful enough to incapacitate any manner of poorly prepared villains and criminals. Thus, Clark is the ever-stupid and selfish Spaghettiman, striking fear confusion into his enemies with his intimidating weak-ass costume comprised of a paper bag for a mask and a red, zip-up hoodie.

Nevermind that Clark and Dale’s apartment is decorated with luchador mask cut-outs that you’d think would inspire Clark to choose a better outfit. Nevermind that Dale is a wannabe cop with a deep knowledge of comics that could help Clark achieve superhero greatness. None of these things are important to Clark. He’s not altruistic, he’s opportunistic, and he wants to be paid for his heroism. 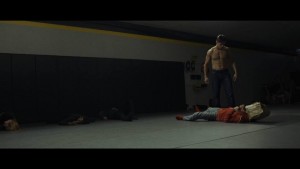 Director Mark Potts and his HeckBender co-horts send up the superhero genre with great glee, taking what is otherwise a normal origin story and turning it on its head by making said hero an often imbecilic and egotistical jerk. It’s a bit of Unbreakable, a splash of Spider-Man, and altogether a fun, and funny, experience. It’s absurd, but it’s straightforward with its absurdity, and the things people find odd aren’t what you’d expect; a man shooting spaghetti from his hands is less confusing to people than the fact that he wants to be paid to be a hero, for example.

Technically, the film is very well-made. It looks gorgeous and the editing is superb. The acting is also fun; Crutcher’s Clark is truly an asshole, but you sense early on that he’s not a bad person. He’s the friend in every group whom everyone else in the group questions why they’re still friends with, but, for whatever reason, no one would ever get rid of him. It’s hard to find that balance in a character and actually portray it convincingly, but Crutcher pulls it off. And on another note, from the opening logo to Clark’s costume (reminiscent of the time Spider-Man was forced to go out with a paper bag mask (also reminiscent of the time Shia LaBeouf walked the red carpet)), you can tell that there was a real feel and respect for the superhero genre and the comic books that fuel it.

All that said, this isn’t a film with a Marvel-sized budget, so the action set-pieces, for example, are more intimate and can be a little stiff and awkward. Thankfully, that actually works for the story and helps you to find the humor in the situation, so it’s not really a shortcoming of the film. I will admit, however, to feeling a very real lag in the momentum of the narrative; pretty early on you can figure where this is going and the film seems to start to spin its wheels for a bit in the middle. Also, while overall it’s a fun time, for a film as strange as this is, it’s actually very restrained in its absurdity. I can’t help feeling it could’ve pushed things even further; it feels surprisingly conventional and traditional at times, but maybe it needs to in order to better inhabit the superhero genre it is parodying. If it ever got too ridiculous, folks might just tune it out (like the abysmal Superhero Movie).

In the end, though, Spaghettiman is a welcome addition to the superhero genre, and in a cinematic landscape where Batman, Deadpool, Ant-Man, and Kick-Ass exist, there’s more than enough room for a reluctant hero who shoots spaghetti from his body. Whether you find the film brilliant or stupid, it’s hard not to find it funny.