I have attended San Jose’s Cinequest Film Festival since my arrival in the Bay Area in early 2003. My first three feature films premiered at the festival three years in a row, beginning in 2008. This year I returned to civilian status, which is a much better way to watch films (he said, bittersweetly).

Unbeknownst to most of this year’s 85,000 visitors, some behind-the-scenes drama threatened the very existence of the festival. Camera Cinemas, a primary sponsor providing multiple screens since the birth of Cinequest in 1990, was facing a crisis. I’ll skip over the first and second acts of this drama and go straight to the denouement at city call, where Camera Cinemas owner Jack Nyblom, the uncontested arthouse king of South Bay, and Cinequest founder Halfdan Hussey made a case for the role of Camera 12 in the cultural fabric of San Jose, compelling the city council to grant a remarkable reprieve. Over obnoxious green drinks at the Cinequest party that night everyone tied to these organizations offered furtive congratulations to one another, never letting on to filmmakers and festival patrons that the wolf had been at the door—no, let me re-tool that phrase: the wolf had come into the party and mingled for a while and had somehow been persuaded to leave before doing harm. This is what is colloquially known as a miracle.

To be frank, very few in this arena have a head for business. It’s usually civic and corporate benevolence that keeps film festivals clothed and fed. This may be an unusually pragmatic aside for a festival overview, but such hints of institutional fragility have a way of conditioning one’s engagement with films and fellow film-goers. 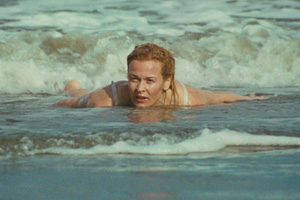 As always, Cinequest programmed its share of films that have been around a while, stuff that premiered at Cannes nearly a year ago and/or Toronto in September. Of these, Norway’s Limbo certainly had my number. Infidelity, sweat and madness among Scandinavian colonials on an exotic Carribbean island. Nothing new, maybe, but the character study feels sufficiently immersive and certain cliches are frustrated before impact. Mama Gogo is noncommitally self-reflexive, if that’s even possible. Never has “meta” been so dry while being so insular—this is in every way the foil of Caveh Zahedi’s hand-wringingly confessional I Am A Sex Addict. Incident follows incident in the way of an autobiography which is well-organized but not *told*. Switzerland wanted an Oscar for The Little Room, and there’s definitely an engrossing lead performance here—I didn’t know you could find a Frances McDormand outside the midwestern United States, but here she is in the form of Florence Loiret Caille. Unfortunately Caille is surrounded by clumsiness at every position, and the film is dramatically inert due to complete preposterousness of the storyline. Everything Will Be Fine is a disappointment from Restoration‘s Christoffer Boe, who seems to fancy himself the Christopher Nolan of Scandinavia. Jens Albinus, who remains relatively unknown despite tone-setting performances in von Trier’s The Idiots and The Boss Of It All, stretches his legs in a vacuum. With Love From The Age Of Reason is frenetic, sentimental magical-realist trash, overproduced in the most gratifying way. It’s a cutesy, rhythmically impeccable 60s artifact (think Lester, Penn) in which Sophie Marceau dies fetchingly for our careerist sins.

There were plenty of North American premieres. War Games And The Man Who Stopped Them is moot as political pot-stirring so it covers its bases by angling for personal essay now and then. The lighting and music, clearly intended to be redolent of clandestine meetings and gasp-worthy revelations, are belligerent. The admittedly fascinating story of Ryszard Kuklinski is probably better gleaned from Wikipedia.

Some world-class directors sat down for lectures and Q&As at the Midnight Sun Film Festival over the years, and the resulting video footage was cobbled into the soporifically rambling Sodankyla Forever – The Century of Cinema. “Forever,” “Century”—they hint proudly at the unkind pace. Your idols and mine (Coppola, Forman, Fuller and others) are shown at their seemingly unedited worst.

Liverpool Goalie is an inventively charming junk drawer of adolescent tribulations, the sort of thing Michael Cera has tried to patent. Bad Behaviour is a blood-bathed map of Tarantino mannersisms but it’s got skill to spare and its segmented character dynamics are sufficiently intriguing.

Synesthesia is that indistinct sort of European film (I’m thinking of Assayas’s Late August, Early September) in which competing narrative strands are given one character or event to bind them. It’s a film with some just-right moments and a diffuse moral agenda—more probing than pronunciatory—so that it feels slight when it’s simply unvigorous in its broaching of ideas. 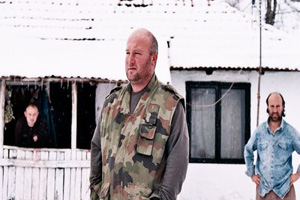 The real find among the US premieres was the (hard to believe it’s a) documentary Village Without Women, which stares at three vacant-eyed Serb farmers as they scrounge desultorily for women in nearby Albania. The eldest brother’s attempts to generate identification papers for himself through the proper channels vindicate Kafka’s not-so-absurd view of the world. It’s hard to explain how this documentary “plays”—formally, it’s what we now call Reality TV (the redheaded stepchild of 60s verite) without the interspersed sit-down interviews. Unassuming, droll, this is the kind of maybe-harmless hixploitation film Errol Morris tried out before he made The Thin Blue Line. I’m rarely excited about documentaries. I hope Village Without Women gets around.

The two US premieres I regretted missing were Life of Fish and Little Baby Jesus of Flandr, and as of this writing I’ve been unable to secure screeners for review.

As Cinequest has grown in budget, attendance and prominence, it has sought to offer a higher ratio of world premieres. These days the festival will introduce you to SXSW-like low-budget digital fare such as Gabi on the Roof in July, which premiered at Cinequest last March and went on to dominate regional festivals and win a handful of awards. (When I asked Silicon Valley Metro critic Richard von Busack “Where’s this year’s Gabi?” he answered “The Glass Slipper,” but more on that later.) LA Weekly’s Karina Longworth recently remarked to me that festivals like Sarasota and Cinequest shouldn’t have to “save” films that SXSW is overlooking. On the other hand, I’m not the only filmmaker who has aimed to premiere at Cinequest. I’ve been treated like royalty and scored a pull-quotable Variety review each time—what’s not to like? Besides (or perhaps most importantly) the audience, bigger and more diverse every year, is hungry for films of all kinds. 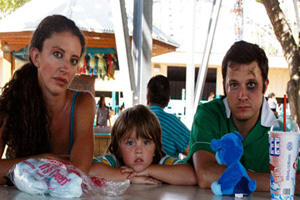 Falling Overnight appears to be a remake of In Search of A Midnight Kiss with a terminal-disease spin. It’s is the sort of vapid hymn to Los Angeles that makes anyone outside Los Angeles think it’s the kind of place everyone already thinks it is. This thing is swollen with too-pretty images and too-pretty actors—both cloy after a few minutes but serve to remind filmmakers in the audience that SoCal does win the prize for the best cameras and lenses and complexions to go with them. In the same way your characters shouldn’t smile incessantly without cause (let someone in the film earn it; take time to establish chemistry), plain-old dirty dishes in a plain-old kitchen shouldn’t give off a paradisiac glow. To use industry parlance, the film is a textbook calling card—no script in sight and too much of everything else.

Matt Zoller Seitz, who premiered his feature debut Home at Cinequest several years ago, produced and edited this year’s Desert Rain. It has everything Falling Overnight lacks and vice versa. Solid plot, well-drawn characters, interesting setting (Albuquerque)—and it stops there.

Enter two Canadian genre films which would have been a better fit for more specialized festivals. Hair of the Beast is a watchable costumer in the tradition of Hammer: the 1665-ness is convincing on the cheap and the horror is second to soapy character dynamics. A Kiss And A Promise is based on “true events” but that doesn’t excuse the unkind-acts-of-randomness approach to re-enacting a serial killer’s dance card. Interesting but inconsistent performance by Mick Rossi, distractingly groomed to look exactly like Robert Downey, Jr., in Iron Man. 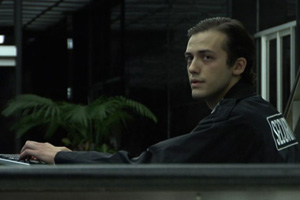 Midnight Son is a quiet little vampire flick which some compared to The Addiction. All moody vampire movies are going to look alike in some ways but about halfway through, this one lunges in two competing/complementary directions—a makeshift black market for human blood emerges around a hospital dumpster, and, less convincingly, our meek night owl is suddenly taken seriously as a painter. The third act disappointingly retreats to more genre-friendly territory and the final shot left me wondering if I’d actually liked the middle as much as I thought I had.

Mystico Fantastico is a magical-realist confection oozing the sexless exoticism of circus performers, more like L’Iceberg than Fellini. It grasps at some narrative strands but mostly nibbles at other art forms with clumsy enthusiasm—a lot of infectious guitar strumming, striking paintings, oral histories. Director Anita Doron bought a camera, moved to the tourist-infested strip of Mexican coast where the film is set, and concocted this feature from stray bits shot without a script. Relying on moment-by-moment inspiration(s) is never advised for filmmakers but Doron has already proven prolific.

Living In Seduced Circumstances nearly repelled me with its title but I’m glad I gave it a shot. Somewhere along the way I realized Ian Gamazon’s cabin-fever-dream wasn’t going to evolve beyond one screeching emotion, and I spent the rest of the running time being impressed. The most striking image of Cinequest 21 is probably this very pregnant woman stalking her injured former lover (we think) through a forest, lobbing arrows at him. I have some strong reservations but Living In Seduced Circumstances is impressively single-minded and the closing scene is a feat. If you’re tired of seeing immaculate preproduction on screen, this film answers your prayers—it seems to have been vomited up. It was shot in six days, a powerful whim. 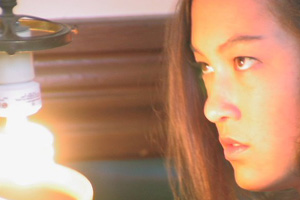 According to Richard von Busack, venerated chronicler of Cinequests, The Glass Slipper is “part of a new era of sophistication” in Bay Area filmmaking, and Sara Vizcarrondo (Box Office Magazine, Look of The Week) called it “the jewel of the fest.” So surely everyone went into Jarrod Whaley’s second feature (and second Cinequest premiere) wary of the hype. But the audience couldn’t resist this film’s dark charm. They groaned, guffawed and talked back to the screen–so excruciating is the protracted awkwardness that a kind of mass giddiness results. The Glass Slipper details the disintegration of a Silicon Valley family, but there’s nothing maudlin here. It runs on caustic slapstick, with the lead actor spewing the most unctuous con-man slogans you’ll ever hear. But to Whaley’s credit these characters are people, not polemical puppets (the story was inspired by a Flaubert novella). The Glass Slipper doesn’t drift off non-committally in the de rigueur style. It has a perfect ending, not only tidy but inevitable. And that may be the film’s most remarkable and marketable aspect: its purposefulness, its thrust, its ability to carry us to a destination. The final scene is executed in a nihilistic deadpan, and we’re left to muse that life can be profoundly tentative, even hopeless. And gosh that sure is funny.