A Personal Reaction to “Christine” 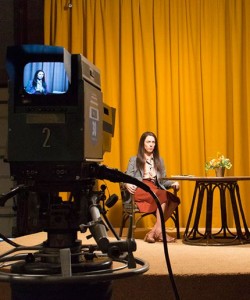 (Melanie Addington is the Executive Director of the Oxford Film Festival and last week she email HtN HQ with a reaction piece regarding directorAntonio Campos and writer Craig Shilowich‘s film Christine which made its debut at the 2016 Sundance Film Festival.)

I don’t know if the emotional gut kick is something everyone will experience with the new narrative feature Christine. I just know that as a female that struggled to be a journalist in the south, this movie sent me into a tailspin, which really, really, is a great thing.

Hear me out. Movies should create a visceral reaction, yet somehow, so few do. How many movies have you left just shrugging when people ask you how it was? Or that leave you with a sugar-coated happy ending so you can mindlessly consume your popcorn? So when a film like Christine comes along, it’s a bittersweet feeling to leave the theater with a lump in your throat and a need to examine your life choices.

Having premiered at Sundance this week, the new dramatic character driven film Christine is getting a lot of buzz thanks to the performance by lead Rebecca Hall who may finally get the real attention she deserves from this performance.

Based on a true story, Christine follows the last few weeks in reporter Christine Chubbuck’s life. With her planned suicide live on the air of her Sarasota TV station in July of 1974 at age 29, she went from just another reporter to the stuff of legend. It’s not really a spoiler, it is honestly the only reason reason that there was a hook to tell the story of a young female reporter striving to make it without making it a trivial romantic comedy. (Look it up, the top 50 female journalist movies in 20th century, a majority end with her getting her man instead of her Pulitzer.) The fact that most of us only really knew her as that lady who killed herself is a shame because she was so much more, and director Antonio Campos and writer Craig Shilowich gets to just that.

While her final moment of her life was seen and talked about by many, it was a behind the scenes press release that is the most telling of who she was. Rather than a dramatic suicide note, Chubbuck organized a full press release to send out once she was gone. Who does that?

Type-A women is who. A woman with a unique vision striving to do her job successfully and to be noticed on air or by her editor or station owner, or just to be noticed with friends, romantically, or even by her family. Yet, her own desire to be seen often is challenged because of her self-made barriers to not allow anyone in. Christine is a woman that just won’t quite play ball. When she finally valiantly attempts to do just that in several aspects of her life, well, it doesn’t quite turn out as it should.

Delving deep into her life the few weeks leading up to her on-air shooting, we get to know her both through the lens of how others see her and her struggle to see herself. Part of the beauty of the writing by Craig Shilowich is the duality he delves into of how we are perceived and how we really perceive ourselves. Throughout the film Christine is asking questions of how to improve or how she has failed at something, while others are often interpreting her through their own worldview shrugging off her concerns, never really stopping to ask her a question back. Perhaps the biggest disconnect between the characters is their inability to honestly see each other and is the root of her loneliness. 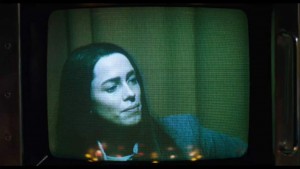 As professional storytellers, they never really stop to communicate honestly with each other. In fact, we learn very little of her through what she says in the film. It is her actions that really define her ambition and loneliness.

Self-deprecating, unable to take a compliment, yet struggling so hard to be a success or even accepted by anyone, Rebecca Hall as Christine Chubbuck transcends the bio-pic and delivers a human full of all the foibles that anyone can relate to. You don’t have to be a female, or a reporter, or have depression to connect. We’ve all been afraid of not being accepted at some point in our lives. We’ve all made the wrong choices that leave us isolated from others. We’ve all had an unrequited crush on the wrong person. We’ve all struggled to connect with a parent. And of course by the time Campos takes us to that fateful day, we’ve followed Christine through her career, friendship, romantic and family struggles. We’ve gotten to know her so well, that when she finally pulls the trigger on her plan, it hurts.

Cut back to the moments just after she shoots herself, with a pool of blood collecting. Her editor, who she struggled continuously to not only break the glass ceiling but battled against his mantra of “it bleeds it leads” holds up a bloody paper with an unsettled look of comprehension on his face. We cut to what is obviously a press release prepared in advance by Christine, serving as an obit and breaking news story. And of course, because it bled, the media led with the story for days. The attention she sought so desperately in life was only truly obtained by her death.

I wondered when the film began if we need yet another film about a reporter. But Christine proves that yes, there is always room for another great story and this one does exactly what Christine Chubbuck always did, find the humanity within the news.