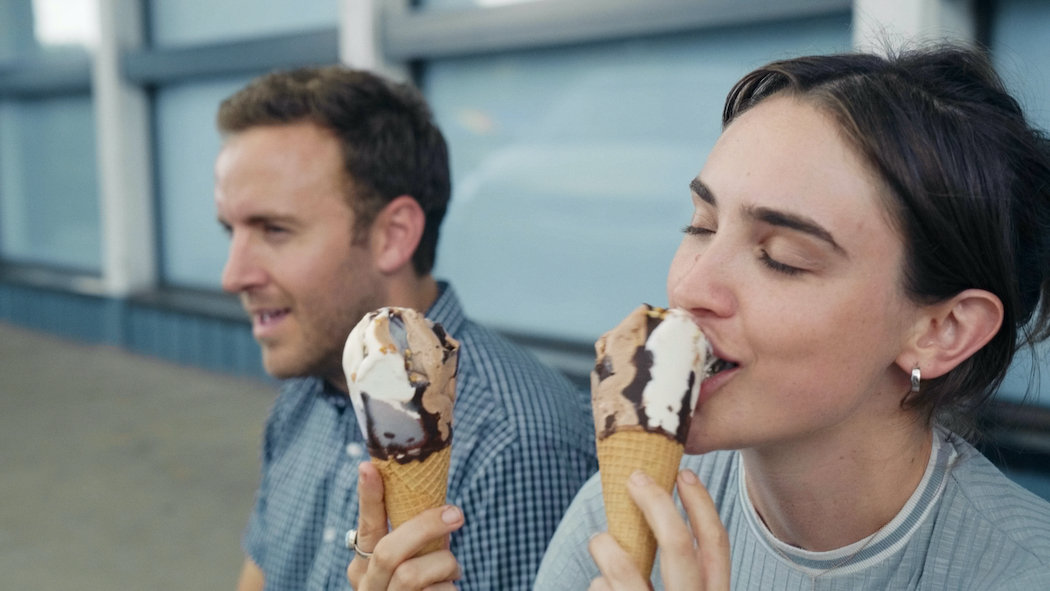 (Will Dennis’ rom-com Vanilla premiered via VOD Tuesday, April 28 via Gravitas Ventures. Like what you see here on Hammer to Nail? Why not pay just $1.00 per month via Patreon to help keep us going?)

Vanilla is the feature film debut of writer-director Will Dennis, who also stars as the lead character in the film, Elliot. A road trip romantic comedy, Vanilla also offers up some drama elements, making it an interesting hybrid mix of genres.

Vanilla begins with an introduction to Elliot (Dennis), a young New York entrepreneur who is in the business of developing mobile apps. In order to finance his latest and greatest app, though, he must sell his old white van in which he’s had so many precious memories in. He finds a buyer in local aspiring stand-up comedian Kimmie (Kelsea Bauman), who is buying the van to help the pizza shop she works at with catering and delivery services. When tragedy befalls the shop, though, Kimmie attempts to return the van to Elliot. Elliot won’t buy it back, but he suggests she sell it to a “friend” of his down in New Orleans who needs it for her film production. Kimmie agrees, but convinces Elliot to come on the road trip with her. However, Elliot’s “friend” that Kimmie is to sell the van to is actually his ex, unbeknownst to Kimmie. Elliot and Kimmie learn a lot from each other on the trip, being very different people with very different personalities, and begin to take a liking to each other. However, Kimmie doesn’t know Elliot’s secret, and Kimmie has some of her own. Will the two find love on the trip, or will their secrets be too much to handle?

The film is very character driven, and thankfully the characters and the cast that play them are up to the task of anchoring the film. Dennis and Bauman play Elliot and Kimmie very well, delivering authentic, grounded performances that seem all too real. The two have great chemistry on screen, and even though they are virtually complete opposites, they interact very well with each other. The film has few supporting characters, but the ones it does have work well and are funny and interesting in their own right, even though they get very little screen time. The characters are all intriguing, identifiable, and understandable, in that even when at odds with each other the viewer can sympathize with both sides.

Along this road trip, the characters learn many lessons that make them question their ways of thinking and their views. Elliot is the standard uptight, business-focused New Yorker who is very plain in both look and personality. On the other hand, Kimmie is a bright, lively, vivacious young woman who almost always seems cheerful and fun, but has some interesting secrets and parts of her life she tends to keep under wraps. Both characters have grand dreams and are unhappy with where they are now, and through helping each other they take steps to become what they want to be. The film also challenges traditional dating norms, such as the man paying for the bill, becoming too intimate too quickly, and so on and so forth, which really makes the viewer contemplate today’s societal dating tendencies in an interesting way.

The film’s weak spots mainly revolve around the imbalance between the two characters’ lessons they take from each other. Elliot learns a lot from Kimmie, and many of his preconceived notions are challenged or changed when he meets her. However, Kimmie doesn’t seem to learn much from Elliot, and is often presented as the “right” one in each situation. This could be the intent, with Elliot being the much more VANILLA (pun intended) character, but I feel like Kimmie should’ve learned a bit more from Elliot as well. Also, the conclusion of the film, while surely unique, leaves a bit to be desired and is a tad anticlimactic.

Overall, Vanilla is a charming film that has intriguing, well-developed characters, clever writing, and many lessons that can be taken away by the viewer. Its criticism of traditional views, quirky characters, and modern atmosphere makes it an engaging watch that most viewers – even vanilla ones – should enjoy.